Voddie Baucham: T.D. Jakes Is Godfather of Word Faith and A Poisonous Influence

From a recent interview with James White, Alpha & Omega Ministries: 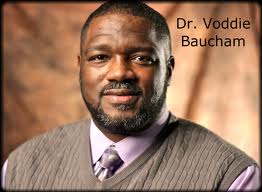 Voddie Baucham: The sort of injection of race into [Elephant Room 2]; and intentional use of race in this regard is sinful.

T.D. JAKES IS HERETICAL CONCERNING MODALISM WHETHER HE BELIEVES IT OR NOT
Posted by Christine Pack at 10:42 AM