A Shepherd Guards His Flock

Thank you to a friend of mine at First Baptist Church of Johnson City, NY for sending me the sermon preached this past Sunday by his pastor, Jim Murphy. I thank God for pastors today, like Jim Murphy, who are boldly taking a stand and, lovingly and with great graciousness, and yet firmly, warning their flocks of false teaching. I am also thankful for pastors who recognize that the church is not "theirs" but belongs to God, and was purchased by the blood of Christ. It is an institution wholly unlike anything else on earth. It is not a business or a social club, and should always be dealt with with the utmost care. I'm thankful that there are at least a few pastors out there who do not fear man, who tremble at God's holy Word, and who are seeking, often against the tide, to fulfill their God-ordained responsibilities in shepherding their flocks:


"Be on guard for yourselves and for all the flock, among which the Holy Spirit has made you overseers, to shepherd the church of God which He purchased with His own blood." Acts 20:28, my emphasis

"(An elder) must hold firmly to the trustworthy message as it has been taught, so that he can encourage others by sound doctrine and refute those who oppose it." Titus 1:9, my emphasis

"I know that after my departure savage wolves will come in among you, not sparing the flock; and from among your own selves men will arise, speaking perverse things, to draw away the disciples after them. Therefore be on the alert, remembering that night and day for a period of three years I did not cease to admonish each one with tears." Acts 20:29-31, my emphasis

As we have mentioned in previous posts, it's not like deception waltzes in with a sign hanging round its neck, announcing its intent. Deception is deceptive. In this sermon warning and exhorting his flock to train themselves in discernment that they might not be deceived, Pastor Jim Murphy does not hold back and names names in his sermon entitled The Subtlety of Satan: 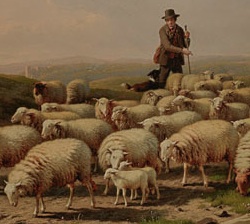 Looking at this list, you might be thinking: are you saying that all of the above are false teachers? In truth, some of them are straight up false teachers. But some of them, while they are perceived to be solid, have begun embracing the mysticism of Spiritual Formation and the Contemplative Spirituality movement, both of which borrow heavily from Roman Catholic Monastic mysticism. (And again, I have to repeat something I feel I say far too often: what could lost, cloistered Roman Catholic monks dabbling in occultism, eastern mantra meditation and mysticism possibly be able to teach true, born again, in-dwelt Christians of today about deepening their relationship to God? But I digress....)

In this sermon Pastor Murphy gives a scathing indictment on what today's version of a "Christian" is:


"(Today's Christian is) someone who has made the decision to be an emotionally well-adjusted, self-actualized risk-taking leader who knows his purpose, lives a no regret life of significance, has overcome his fears, enjoys a healthy marriage, is an attentive parent celebrating recovery from all their hurts, their habits, their hang-ups, and that practices biblical stress relief techniques, is financially free from consumer debt, fosters emotionally healthy relationships with his peers, attends a weekly life group, volunteers regularly at church, tithes off his gross, and has taken at least one humanitarian aid trip to a third world nation......Never once do you read in that modern contextualized interpretation that a Christian is one who sees their sin, confesses their sin, repents of their sin, and receives the gift of salvation in Christ alone. That's how far we've come. So Christianity now is dictated and defined by culture."

Pastor Murphy also exhorts his congregation to "connect the dots," between the many dangers we are warned about repeatedly in Scripture and what is being taught under our noses in many churches and by many Christian authors and leaders today.


‎"The mood is that if you have a reformed soteriology you get a pass on everything else."  -John MacArthur

I would also add the warning not to give an automatic pass to pastors perceived to be solid. We must always be Bereans, and we must always be holding all things being taught in the name of God up to the actual word of God. But please, don't just take my word for it, or Pastor Murphy's word for it, or even John MacArthur's word for it: all that I have written about here is a matter of public record for those who want to know the truth about what is being taught, and by whom. It's there for the finding for anyone who looks.

"And as Jesus sat upon the mount of Olives, the disciples came unto him privately, saying, 'Tell us, when shall these things be? and what shall be the sign of thy coming, and of the end of the world?' And Jesus answered and said unto them, 'Take heed that no man deceive you.'" Matthew 24:3-4

"See to it that no one takes you captive through hollow and deceptive philosophy, which depends on human tradition and the basic principles of this world rather than on Christ." Colossians 2:8

"The weapons we fight with are not the weapons of the world. On the contrary, they have divine power to demolish strongholds. We demolish arguments and every pretension that sets itself up against the knowledge of God, and we take captive every thought to make it obedient to Christ." 2 Corinthians 10:4-5

What Is Spiritual Formation? (Sola Sisters)

A Time of Departing

(an excellent primer on how mysticism is entering today's churches)

Contemplating Contemplative Prayer: Is It Really Prayer? (Christian Answers For The New Age)

The Origin of Contemplative Prayer (Apprising)