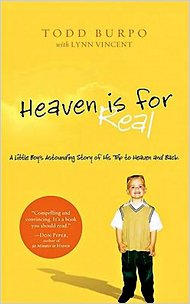 In a recent article (The Burpo-Malarkey Doctrine), Pyromaniac's Phil Johnson takes to task the recent onslaught of books which detail alleged heavenly visitations by humans, who presumably came back to tell the tale. While this is by no means a comprehensive list, some of the best known books of this genre include:


Heaven Is For Real, by Todd Burpo

The Boy Who Came Back From Heaven, by Kevin Malarkey

90 Minutes in Heaven: A True Story of Death and Life, by Don Piper

23 Minutes In Hell: One Man's Story About What He Saw, Heard, and Felt in that Place of Torment, by Bill Wiese

In his article, Johnson also notes that books of this type have been around for a long time, and mentions a book that I read as a New Ager many years ago, titled Embraced By The Light, by New Ager Betty Eadie. Johnson also noted that Pastor John MacArthur of Grace To You will be re-releasing an expanded version of his 1998 book, The Glory of Heaven, with an updated section that includes critiques of Heaven Is For Real and The Boy Who Came Back From Heaven. From the upcoming book:


For anyone who truly believes the biblical record, it is impossible to resist the conclusion that these modern testimonies—with their relentless self-focus and the relatively scant attention they pay to the glory of God—are simply untrue. They are either figments of the human imagination (dreams, hallucinations, false memories, fantasies, and in the worst cases, deliberate lies), or else they are products of demonic deception.

We know this with absolute certainty, because Scripture definitively says that people do not go to heaven and come back: "Who has ascended to heaven and come down?" (Proverbs 30:4). Answer: "No one has ascended into heaven except he who descended from heaven, the Son of Man" (John 3:13, emphasis added). All the accounts of heaven in Scripture are visions, not journeys taken by dead people. And even visions of heaven are very, very rare in Scripture. You can count them all on one hand.

Dear Christians, please don't be taken captive by vain philosophies and fantastical visions that don't line up with Scripture. We must test all things by God's Word, to see if they are true or not. It is particularly interesting to me that, as Dr. MacArthur pointed out, biblical visions of heaven are exceedingly rare. And we must therefore concede that all that God wants us to know about heaven He has revealed in his Word, but beyond that, we must not go further. As Deuteronomy 29:29 states, "The hidden things belong to the Lord." Can we take this teaching from Deuteronomy to heart, then, and be content with what God has chosen to reveal, and not go chasing after flesh-tickling, unbiblical accounts of visions of heaven?

The Burpo-Malarkey Doctrine, by Phil Johnson

Pastor Justin Peters Explains Why Stories of Trips To Heaven Do Not Line Up With the Bible
Your Best Afterlife Now - An Examination and Critique of Claimed Visits to Heaven and Hell, by Justin Peters

Heaven Is For Real, a review by Tim Challies

90 Minutes In Heaven, a review by Tim Challies
Posted by Christine Pack at 6:18 PM