(NOTE: The Strange Fire conference has now wrapped up, but audio of the sessions are now available here.)

The historical account of Nadab and Abihu, as recorded in the tenth chapter of Leviticus, is a sobering and shocking one. As Nadab and Abihu were the sons of the high priest, Aaron, their destruction is perhaps all the more shocking. What happened, very simply put, was this: as God had singled out his chosen people the Jews from among all the pagan nations, and had begun giving them very specific instructions in how He was to be approached, Aaron's son, Nadab and Abihu, disregarded these instructions and approached the Lord in a different way, in the way that they thought was fitting. God responded to this rebellion by swiftly, and utterly, destroying the men, most certainly to the shock and dismay of those present:


Now Nadab and Abihu, the sons of Aaron, took their respective firepans, and after putting fire in them, placed incense on it and offered strange fire before the Lord, which He had not commanded them. And fire came out from the presence of the Lord and consumed them, and they died before the Lord. Then Moses said to Aaron, “It is what the Lord spoke, saying,

‘By those who come near Me I will be treated as holy,
And before all the people I will be honored.’”

Dr. John MacArthur of Grace Community Church in California has taken this account in Leviticus as his starting point for the Strange Fire conference (now being livestreamed), and has connected this historical account of Aaron's sons to the contemporary movement known as the Word of Faith movement. Word of Faith is a quasi-Christian movement that is literally riddled with false teaching, and unfortunately, has been exported all over the world via TBN.


For those who are interested, you can live stream John MacArthur's long-awaited Strange Fire conference here. I highly recommend this conference to anyone with friends caught up in the Word of Faith teachings (also known as the "Prosperity Gospel" and "Name It and Claim It"). (For those who miss the conference, all of the teaching sessions will be uploaded later.)

Dr. MacArthur will also be releasing a book by the same name as the conference, available for purchase November 2013. From Amazon: 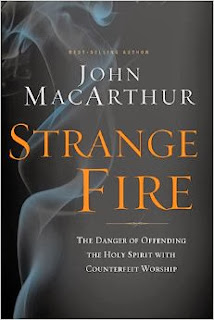 What would God say about those who blatantly misrepresent His Holy Spirit; who exchange true worship for chaotic fits of mindless ecstasy; who replace the biblical gospel with vain illusions of health and wealth; who claim to prophesy in His name yet speak errors; and who sell false hope to desperate people for millions of dollars?

The charismatic movement has always been a breeding-ground for scandal, greed, bad doctrine, and all kinds of spiritual chicanery. As a movement, it is clearly headed the wrong direction. And it is growing at an unprecedented rate.

From the Word of Faith to the New Apostolic Reformation, the Charismatic movement is being consumed by the empty promises of the prosperity gospel. Too many charismatic celebrities promote a “Christianity” without Christ, a Holy Spirit without holiness. And their teaching is having a disastrous influence on a grand scale, as large television networks broadcast their heresies to every part of the world.

In Strange Fire, bestselling author and pastor John MacArthur chronicles the unsavory history behind the modern Charismatic movement. He lays out a chilling case for rejecting its false prophets, speaking out against their errors, showing true reverence to the Holy Spirit, and above all clinging to the Bible as the inerrant, authoritative Word of God and the one true standard by which all truth claims must be tested. (online source)