"Is Codex Sinaiticus a Modern Forgery?" A Landmark Debate Between Dr. James White and Chris Pinto


Chris Pinto: "Is it not possible that within those 2,000 manuscripts that there could be the readings that you are referring to in Codex Sinaiticus? The unique readings....is that not possible?"

Dr. James White: "Anything is possible, but that is not how you do history."

Chris Pinto: "Have you been to Mt. Athos?"

Dr. James White: "Well again, it's possible that the New Testament in Klingon is on Mt. Athos too, but I haven't been there, and nobody's seen them. But again, the problem in your question is that mere possibilities are not facts in evidence." (Debate, 59 minute mark)

The above exchange was an amusing moment in last night's Codex Sinaiticus debate, and was somewhat unexpected given that textual criticism, often regarded as a dry and dusty topic, is not generally given to humor. But the exchange was revealing in that it highlighted that respected Bible scholar Dr. White showed up being, well, Dr. White, thoroughly prepared and ready to go, and Worldview Weekend's Chris Pinto showed up with not much more than speculation and vague possibilities, which as Dr. White so humorously but correctly pointed out, is not the way textual criticism is done.

Dr. James White (Alpha and Omega Ministries) and Chris Pinto (Noise of Thunder Radio) have finally completed their much anticipated debate last night on Pirate Christian Radio. The debate topic was "Codex Sinaiticus: Is It A Modern Forgery?" (The debate can be listened to in its entirety here.)

The Codex-Sinaiticus-Is-A-Forgery argument has been trotted out time and time again to bolster the King James Only (KJVO)/Textus Receptus Only (TRO) position, a view which casts suspicion on all translations that don't come from the Textus Receptus. (Dr. James gives a brief synopsis of the KJVO movement here.) The reason this issue matters so much is because the KJVO/TRO view has produced an almost cult-like movement within Christianity, and if left unchecked, these errant teachings have a way of infecting, and affecting, the body of Christ in profoundly negative ways. Many of us as Christians have had at least some kind of experience in dealing with Kings James Only/Textus Receptus Only proponents, and we understand the difficulties in helping those ensnared in these beliefs to understand the truth. 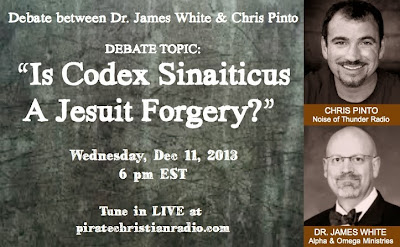 It seems as if every generation or so, a new proponent of the King James Onlyism/Textus Receptus Only position emerges, with Chris Pinto of Noise of Thunder Radio apparently being today's bearer of that torch. But I agree with Dr. White when he stated on his Oct 22, 2013 show that "Mr. Pinto and folks like him, are a hundred years behind in scholarly study."  The fact is that all of us can, and do, make mistakes. My hope is for Chris Pinto and Dr. White to actually get together off-the-record, during which time Dr. White can bring Chris Pinto up to speed on the many, many much older fragments and whole sections of the Bible that have been found since the time of Textus Receptus that independently corroborate each other, and which sort of make the "King James Only/Textus Receptus Only" arguments obsolete. No conspiracy can account for that kind of independent corroboration.

Fred Butler of Grace To You media ministry and the Hip and Thigh blog has also recently given his testimony of being a former King James Onlyist. He describes himself as having been "known as a guy you wanted to avoid" because of his argumentative and strong stance for the King James Only position. But while at seminary, he was challenged by a friend to look at the evidence, which he decided to do. Butler went down to the seminary library and gathered up all the sources cited by Gail Riplinger in her book, and as he tells it, he knew within minutes that Riplinger was "not being honest with her research." And of course, not long after that, he came out of KJVOnlyism. (You can listen to his interview in its entirety here, starting at the 35 minute mark.)

I've also heard Bob DeWaay of Gospel of Grace Fellowship discuss the KJVO/TRO issue with respect to Gail Riplinger (the leading KJV-Onlyist of several decades ago). He makes the point that these kinds of teachings move along and gain steam because the more solid teachers might be aware of the wrong teaching and think, "Well that's absurd, no-one's going to be taken in by that," and then not think it worthy enough to even address. But unfortunately, when that happens, the errant teaching continues to grow and gain steam, and is doing damage to the body of Christ all along the way because it hasn't been definitively addressed. So it's therefore a good thing we have the James Whites and the Bob DeWaays and the Chris Rosebroughs and the Fred Butlers out there who have the will to contend, and who are willing to get in and do the heavy lifting of doing a point-by-point, scholarly refutation of the errant teaching in question.

Incidentally, I suspect that the ripple effect from this debate will no doubt continue for years to come, much like James White's debate with Gail Riplinger from 20 years ago that is still considered a landmark event, and is still discussed today. A big thank you to Dr. James White for taking the time to systematically work through the errant teachings of the KJVO/TRO position in last night's debate, and a big thank you also to Chris Rosebrough of Fighting For The Faith for setting up the debate.

Miscellaneous Resources
The Christian and Conspiracy Theories (Dr. Ken Samples, Issues Etc.)
What is the KJV Only movement? Is the King James Version the only Bible we should use?
Textual Criticism: What Is It?
What is the KJV only movement? Should we only use the King James Version of the Bible?
What Is Textual Criticism of the Bible?