Author of The Shack: "The God of Evangelical Christianity is a Monster"

This past Friday night, author and researcher Ray Yungen attended a lecture at Concordia University in Portland, Oregon to hear author William Paul Young. The name of Young's talk was "Can God Really Be That Good?" During the talk, Young told the audience that "the God of evangelical Christianity is a monster." He was referring to the evangelical belief that God is a God of judgment and will judge the unbelieving. Young also rejects the biblical view of (wherein Jesus died as a substitute for us to pay the price of our sins). This view by Young is evident in a radio interview he had one year ago where he rejected this view of the . He echoes the sentiments of William Shannon and Brennan Manning, who both say that the God who punishes His own son to pay for the sins of others does not exist:


"He is the God who exacts the last drop of blood from His Son, so that His just anger, evoked by sin, may be appeased. This God whose moods alternate between graciousness and fierce anger - a God who is still all too familiar to many Christians - is a caricature of the true God. This God does not exist." (Shannon, Silence on Fire, p. 110, also see Manning who stated the very same thing in Above All, pp. 58-59 )

Young told the audience that his book has now sold 14 million copies. He says that he believes his book has been a "god thing" to heal people's souls because so many people have been tainted by this evangelical God.  Young also said that his book is so effective because when you put something in a story form it gets past mental defenses.
Young's obvious disdain for Christianity (in a derogatory manner, he said there are "1.4 million" rules in the evangelical church) is shown in his book as well when 's "Jesus" states:

"I have no desire to make them [people from all religious and political backgrounds] Christian, but I do want to join them in their transformation into sons and daughters of my Papa" (p. 184).

During the lecture, Young posed a rhetorical question addressed to "evangelicals:" "Do you want to hold onto your darkness?" (meaning, the "narrowness" and "intolerance" associated with evangelicalism).  He then answered for them: "No, you want to get rid of it."

Additional Resources
The Author of The Shack is A Universalist


Michael Youssef's Warning about The Shack

Posted by Christine Pack at 3:46 PM

Thank you to Ingrid Schlueter, host of Crosstalk America, for having me on her radio show today.

During the show, I briefly went over my own testimony of being mercifully saved out of the New Age (which is today called "New Spirituality" and "Integral Spirituality"), only to find that the same mysticism I had once practiced was now coming into the church.

Mysticism has gone mainstream, and many of today's pastors and authors are "speaking" the language of mysticism (Spiritual Formation, Spiritual Disciplines, Solitude and Silence, etc.), as well as selling books leading unwitting readers into occultic mystical practices- chiefly, mantra meditation.  The book Celebration of Discipline, by Richard Foster, first published in 1978 and taught today in most seminaries as a "classic of the faith," has probably been the one book that has been the most instrumental in bringing Roman Catholic/pagan mysticism into the church.  Some of the more surprising names moving in this mystical direction are well-respected leaders in evangelicalism today:

One thing I'm not sure I explained well in the interview that I wanted to go over here is that when people do contemplative prayer as taught by the mystics (with mantra meditation), they WILL have a spiritual experience. A lot of people tend to think the occult is all smoke and mirrors and diversionary tactics. That's not true. The occult is the area of the spiritual realm over which Satan has dominion. If it will take a person's focus off of God, he is more than happy to give an experience that will be profound, intense, positive, and yes, supernatural. At least, in the beginning, these meditative experiences will be positive and will "feel" good. At some point, though, Satan's mask will "slip," because as Ingrid pointed out, he is evil and it is his intention to steal, kill and destroy. He will not stay masked forever.

I have friends who do contemplative prayer, and I know this is kind of a ruthless prayer, but I pray that they will get a glimpse of Satan's true nature that will so terrify them that they will repent, and run back to the Savior and worship the Lord in spirit and in truth.....rather than approaching the Lord with worship that has been syncretized with pagan practices.

You can listen to the show in its entirety here.

Rick Warren, "America's Pastor," author of Purpose Driven Life and pastor of Saddleback Church, literally changed how we do church today in America. With the success of the Purpose Driven Life "franchise," out went the crosses and hymnals, communities were polled to see what their "felt needs" were - which the Purpose Driven model church of that community would then seek to meet, pastors began dressing in business casual, and sermons morphed from expository passage-by-passage preaching into topical, life enhancement coaching sessions. But beyond  the surface changes, something sinister was being introduced in this best-selling, Christian book:  breath prayers and Roman Catholic mysticism.

In Purpose Driven Life, Rick Warren describes the practice of "breath prayers" and positively endorses Roman Catholic mystics Brother Lawrence and Madame Guyon. Those references have most likely gone over the heads of most readers, but as a former mystic myself, I can tell you that "breath prayers" is code for mantra meditation, which both Brother Lawrence and Madame Guyon practiced.

Saddleback's website also features two books by Quaker and mystic Richard Foster, today's leading proponent of something known as "Spiritual Disciplines" or "Spiritual Formation."  Also promoted are several other books focusing on the Spiritual Disciplines, which teach a practice that is nothing more than a "Christianized" version of mantra meditation, a pagan practice borrowed from Hinduism and Buddhism.  In this pagan practice, a person will "empty" the mind employing some kind of device: rhythmic music, repeating a word or phrase, focusing on breathing, etc., in an attempt to connect to God. 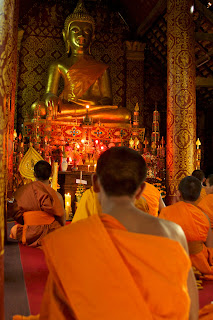 But in today's undiscerning church - and with a little help from Rick Warren and his Purpose Driven empire, this pagan practice has been flowing into churches because its proponents insist that this is a Christian practice and has been practiced by Christians for centuries. After all, what could be wrong with something called "Spiritual Formation," right? It sounds kind of Christian and churchy, doesn't it? And we know there's something about Christ being formed in us (Gal 4:19), so that has to be what this is talking about, right? Wrong.  Spiritual Formation is a series of disciplines which supposedly aid in "spiritual development," and which are generally thought to be Christian because these disciplines were formed centuries ago by monks in Roman Catholic monasteries. There's just one problem here, but it's a biggie: these Roman Catholic monks, who were known as the Desert Fathers, cloistered themselves in the Middle East and Egypt; and, because of their close proximity to eastern cultures, ended up being heavily influenced by paganism to the point of grafting pagan practices into their prayers, chiefly, mantra meditation.  So in essence, these "spiritual disciplines" that are part of today's "Spiritual Formation" programs are classic, eastern occultic practices that have simply been "Christianized" with a sprinkling of the magic pixie dust of Christian terminology.  But make no mistake, these practices are occultic.

Jesus himself seems to be addressing this very topic when He says:


"And when you pray, do not keep on babbling like pagans, for they think they will be heard because of their many words." (Matthew 6:7, my emphasis)

I have often heard this scripture taught by pastors as an admonition not to engage in "mindless" prayer: that is, praying by rote, without thoughtfulness or care.  While it is true that we ought to be mindful that we are entering into the presence of God every time we pray, with the understanding that this is an astounding privilege in and of itself - and we therefore ought not to take this privilege for granted and speak thoughtlessly or carelessly -  that is not what this verse is talking about. This verse is admonishing Christians not to pray in the same manner as pagans.  And how do pagans pray?  Well, outside of Christianity, mysticism has always been the natural default of the human heart.  All world religions that I know of have some kind of mystical tradition through which they attempt to approach God:


"Other methods of meditation involve drumming, dancing, and chanting. This percussion-sound meditation is perhaps the most common form for producing trance states in the African, North/South American Indian, and Brazilian spiritist traditions. In the Islamic world, the Sufi Mystic Brotherhoods have gained a reputation for chanting and ritual dancing. These are known as the Whirling Dervishes. Indian Guru, Rajneesh, developed a form of active meditation called dynamic meditation which combines the percussion sound, jumping, and rhythmic breathing." (Ray Yungen, For Many Shall Come In My Name)

These mystical practices, rather than bringing us into the presence of God, however, work to put the brain into a trance-like state, lowering one's God-given boundaries, and opening its practitioners up to the demonic realm.  This is what Jesus is cautioning against in this passage.

And yet, this pagan practice is exactly what Rick Warren, America's Pastor, first introduced to us in his book Purpose Driven Life, and is now promoting on his Saddleback website.  And so it has to be asked: How much further away from orthodoxy does Rick Warren have to fall before Christians and Christian  leaders will begin to "mark him out" and separate from him (Romans 16:17) - rather than continuing to give him a platform for teaching and preaching?

Author of The Shack Is a Universalist. Any Questions?

Posted by Christine Pack at 6:02 PM