Julia Roberts, who stars in the upcoming movie Eat, Pray, Love - which presents a sort of "Americanized" version of Hinduism - recently said in an interview that she is now a practicing Hindu.

Only in America could we find a way to romanticize the core theology of Hinduism to the point that it looks appealing - when in reality it is a religion of despair.  The "Americanized" form of Hinduism, however, as artfully put forth in Eat, Pray, Love, "feels" very good to the sinful flesh.   As a friend of mine pointed out....food binges, Eastern spirituality, and free love?  Please!  So much more appealing than the biblical concepts of crucifying the flesh, dying daily to self, and laying down one's life. 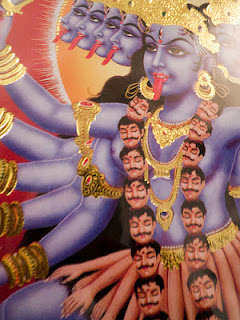 Julia Roberts needs to read Out of India by Caryl Matrisciana to get an understanding of the underlying ugliness and despair of true Hinduism.  Writer and producer Caryl Matrisciana was born and raised in India, and witnessed first-hand the devastating effects of Hindu thought and beliefs on the culture around her.  The goal of Hinduism is for its practitioners to realize that one's soul is identical to Brahman, the "Supreme Soul."  Or, in layman's terms....we are all "god," which is the core theology of the New Age.

But, UNTIL a Hindu attains this knowledge, they are, according to eastern belief (Hinduism/Buddhism), trapped in the cycle of birth, life, death and rebirth (reincarnation).....a theology which leads to utter despair.

We've written before about the fact that the New Age, that "dated" 80s movement starring Shirley MacLaine running down the beach with her crystals clanking, never really went away, it just became absorbed into our culture.  New convert and "practicing Hindu" Julia Roberts has just proved this point...in spades.  Hinduism and New Age Spirituality are here to stay.