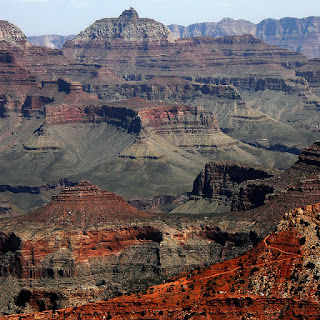 
❝The Grand Canyon offers some of the most breath-taking vistas in the world, but did the tiny Colorado River really carve this massive feature? Dr. Andrew Snelling explains the formation of the canyon in light of the global Flood of Noah’s day, not slow and gradual processes.❞

I can't even begin to express how instrumental Answers in Genesis was in helping to form my biblical worldview. As a new Christian, I was still pretty evolutionary in my thinking. Then along came AIG.  I remember going through their LONG list of scientists on staff and just being amazed! And here's why: I had always been told and taught, from grade school all the way up through college, that science had "proved" evolution. Evolution was "fact." So, having had this life-long indoctrination, the first time I ever heard of "Young Earthers" as a new Christian, I immediately thought "cult!" But then several years later, along came Answers in Genesis, and here were all these scientists on staff, many of them with multiple and advanced degrees in the sciences.  In other words, it's not like these were guys with their PhDs in literature or something, weighing in on subjects they hadn't studied. These were scientists who had studied Archaeology, Biology, Zoology, Geology, Physics, Chemistry, Palaeontology, etc., etc., and who, after studying the evidence, were saying, "It points to Young Earth, and here's why...." Bottom line: I just really like how these scientists, working alongside Answers in Genesis, have turned that condescending, worldly dismissal of the Young Earth view on its ear. There are no "village idiots" in this bunch, my friends. You can say a lot of things about this group of scientists, but one thing you can't say is that they're stupid. In fact, I believe that God is using the ministry of Answers in Genesis to respond to the mockers of this age:

The Creation Museum
Posted by Christine Pack at 11:33 AM