For those who think the Emergent Church Movement is just another flavor of Christianity, Exhibit A for your consideration:

Samir Selmanovic, a rising star in the Emergent Church Movement, thinks it is just fine for someone who is a professing Christian to attend a worship service "with a wonderful Wiccan community."  In An Emergent Manifesto of Hope, some of Selmanovic's writings gave us a hint of his beliefs:


Can it be that the teachings of the gospel are embedded and can be found in reality itself rather than being exclusively isolated in sacred texts and our interpretations of those texts? If the answer is yes, can it be that they are embedded in other stories, other peoples’ histories, and even other religions?…

God’s table is welcoming all who seek, and if any religion is to win, may it be the one that produces people who are the most loving, the most humble, the most Christlike. Whatever the meaning of “salvation” and “judgement,” we Christians are going to be saved by grace, like everyone else, and judged by our works, like everyone else…

For most critics of such open Christianity, the problem with inclusiveness is that it allows for truth to be found in other religions. To emerging Christians, that problem is sweet… Moreover, if non-Christians can know our God, then we want to benefit from their contribution to our faith.

This kind of teaching has become increasingly more mainstreamed and accepted - through a false - but very popular - teaching called "The Wider Mercy Doctrine," a form of Universalism that has - amazingly - somehow taken root in some of today's churches.

The "Wider Mercy Doctrine" is a belief that salvation can be obtained even when a person has not heard the gospel and does not know Jesus Christ. It is a belief that, somehow, God grants salvific status to persons who are sincere in their religious beliefs, even if those beliefs are false. Therefore, according to this false teaching, a sincere Buddhist or Shintoist or Toaist or any other religious adherent can obtain salvation, simply because they are sincere in their belief and desire to approach God.

Billy Graham espoused it in years past, and Rob Bell, William P. Young, and Leonard Sweet (among others) espouse it today. Now, most professing Christians who hold to the Wider Mercy Doctrine have made at least some effort to have Jesus figure somewhere in their redemption story through a heresy which originated in the 3rd century A.D. with a false teacher named Origen. This teaching is known today by various names, including Christian Universalism and Universal Reconciliation.  But Samir Selmanovic is showing that for some, this is no longer necessary.  If you think about it, it makes sense. Where Samir Selmanovic has ended up is the natural "end" of this Wider Mercy doctrine.....which states, "Hey, who are we to "put God in a box," and say that He can't save people in any way He wants to?" 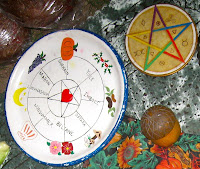 The Wider Mercy heresy sounds so good and loving and tolerant, but think of it like a bullseye with concentric circles: Jesus and the narrow way in the center, then Catholicism in the next ring, then next would be the Christian cults (Jehovah's Witnesses, Seventh Day Adventists, Mormons, etc.), then next would be Buddhism, Hinduism, Islam, paganism, and continuing outward, with the very outermost ring being straight up Satan worship. (Obviously, the false religions in the closer in circles would more closely mimic Christianity, in that they would possess similar terminology, have similar worship practices, they might even sing hymns and quote Scripture.  But as you move outward, more and more of that would drop away.)

Samir Selmanovic has just followed this heresy to its natural conclusion...he may be a few rings short of straight up Satanism....but he's not that far off. Wicca is very dark.

I have been watching in amazed astonishment for several years as the Emergent Church Movement has grown increasingly more apostate and brazen in its heresies.  The developments have been fast-moving and continually surprising.  But I have to say, this one surprised even me.  Worshiping with witches? I believe that we may have just witnessed the the merging of the Emergent Church with New Age Spirituality.  Can our Lord's return be far off?

Billy Graham: "There's so much that we have in common (with the Roman Catholic church)"

What Is A "Christian Universalist?"

Is Rob Bell A Universalist?  Yes and No.
Rob Bell: Don't Call It Universalism

Burning Down “The Shack:” A study in Universalism
Posted by Christine Pack at 11:44 AM