Article by Marcia Montenegro (Christians Answers For The New Age) 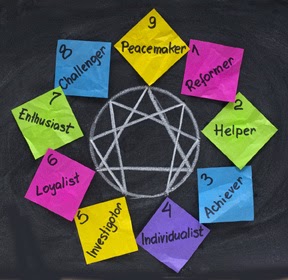 "See to it that no one takes you captive through philosophy and empty deception, according to the tradition of men, according to the elementary principles of the world, rather than according to Christ. For in Him all the fullness of Deity dwells in bodily form, and in Him you have been made complete, and He is the head over all rule and authority." Colossians 2:8-10

An article by Laura Turner, “What Kind of Sinful Are You?” on the Christianity Today website promotes the use of a device called the Enneagram. The Enneagram is a chart of numbers one through nine, usually depicted with arrows from each number pointing to two other numbers. My article on the Enneagram, written in 2011, can be found here: The Enneagram GPS: The Gnostic Path To Self

Below are selected quotes in italics from the Christianity Today article, followed by my comments.

CHRISTIANITY TODAY
"…..The book was Richard Rohr and Andreas Ebert’s The Enneagram: A Christian Perspective. (It’s pronounced any-a-gram.) I had been flipping through it, but quickly realized this wasn’t a book to flip through."

MY COMMENTS ON ROHR
Richard Rohr is a Franciscan friar who runs the Center for Action and Contemplation in Albuquerque, New Mexico. At his conferences, Rohr promotes not only the Enneagram, but panentheism (God is in everything, i.e., the earth as God's "body"), Buddhism, and New Ager Marianne Williamson.

In the last 8 minutes of this lecture at Texas Lutheran University (from the YouTube video titled "Falling Upward," which can be viewed here), in response to a question re John 14:16 (the question is at 1:25:35), Rohr expresses a Jesus-Christ distinction. He first says that Jesus’ statement that He is “the way, the truth and the life,” is that John’s Gospel is written so much later than the other gospels, and that “this is not Jesus of Nazareth; this is the eternal Christ speaking” in John’s Gospel. The following are other quotes from his reply:

"Jesus came in a moment of time to reveal what was eternally true."

"The Christ was born at the moment of the big bang when God decided to materialize” and “to become visible."

"Strictly speaking, it is not correct to say Jesus is God. Jesus is the combination of God and human."

“We all have to put matter and spirit together.”

Jesus is telling us that "Your deepest identity is divine." 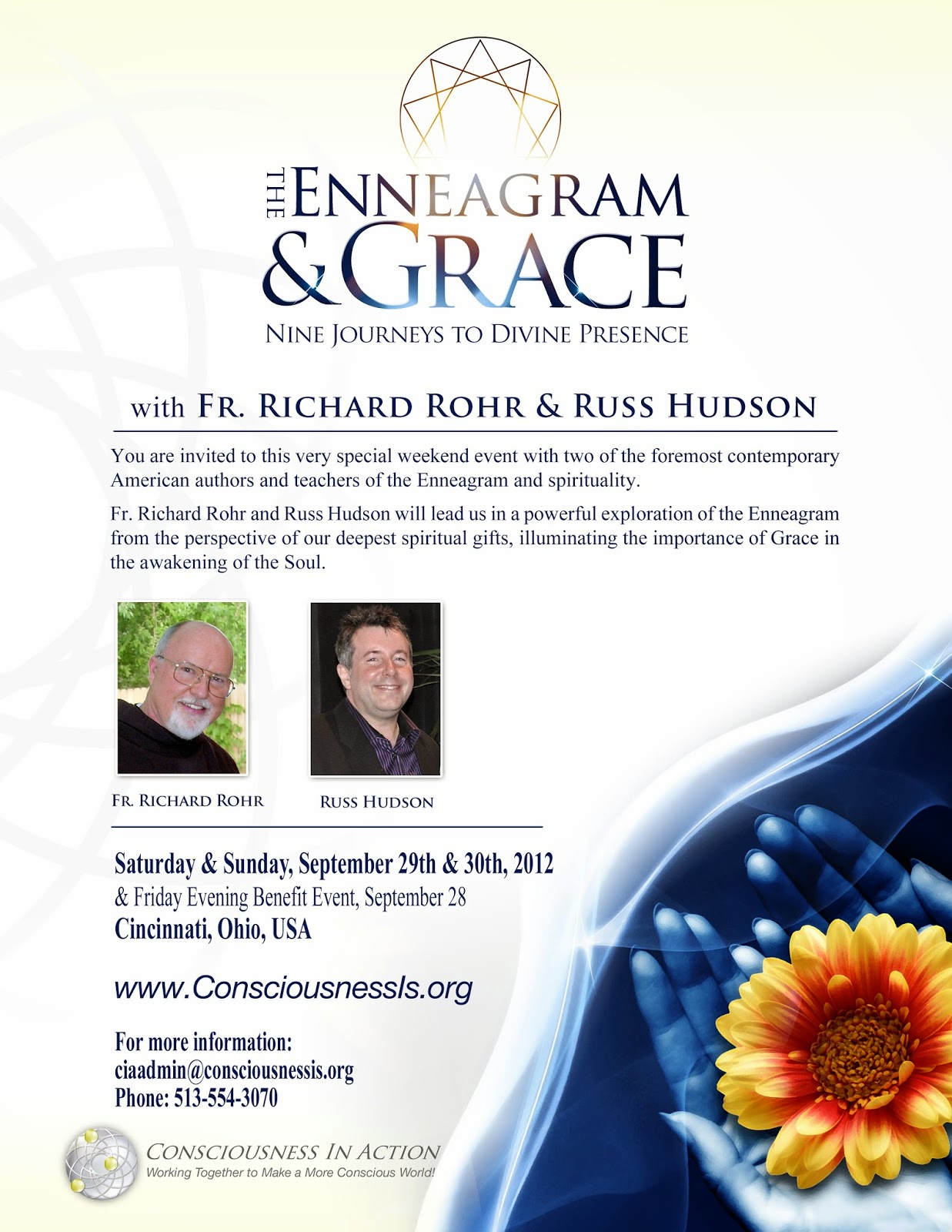 In this interview (from the YouTube video titled "Cosmic Christ," which can be viewed here), Rohr says:

“The Big Bang is the birth of the Christ.”

The Big Bang was the materialization of the Cosmic Christ, who is later revealed in a human person (Jesus).” The mystics "got this."

We’ve been concerned with the historical Jesus but missed out on the Cosmic Christ.

The height of "Christian seeing" is "to see God in everything."

“The world was the first body of Christ.”

Rohr goes beyond talking about the incarnation because his statements indicate a distinction between the historical Jesus and “the cosmic Christ.” He also states that Christ or “the Cosmic Christ” had a beginning in the Big Bang.
CHRISTIANITY TODAY
"The Enneagram is an ancient personality typology, understanding people through the lens of their passions and their temptations…."

MY COMMENTS
*Wrong! It was never an “ancient personality typology.”

CHRISTIANITY TODAY
"At the recommendation of a friend, I took the Enneagram online assessment, which categorizes each person as a number, one through nine. I was a three…."
MY COMMENTS
*This is arbitrary. Why 9? Who decides it should 9 numbers and what each number represents? Read further to see the real reason it’s 9 numbers.

CHRISTIANITY TODAY
"….Its exact origins are contested, but by many accounts, the idea of having nine types ('Enneagram' means 'nine-pointed shape')* derives from Evagrius Ponticus’s eight deadly thoughts and the central thought he called “love of self.” Ponticus was a Christian monk and ascetic, a Roman citizen in the late 4th century who lived in a monastic community outside of Alexandria many years of his life."

MY COMMENTS
Origins of the Enneagram are disputed but it is possibly from Sufi origins. Nine is seen as a divine number in Sufism, and, according to the Enneagram Institute, support “for the nine types is a Gnostic idea of the "nine divine forms," and a presumption that man's natural essence is perfect and in union with Divinity. Advocates of the Enneagram point to the geometric proportions in the diagram that illustrate the relationship of the numbers to each other as support for their view that there is a special meaning and purpose to the diagram. This is sacred geometry, an occult belief that shapes, patterns, or certain proportions have special inner meaning”) (quoted material from my Enneagram article).

The Enneagram was promoted by mystic George Gurdjieff (1866?-1949) and by his followers, P. D. Ouspensky (1878-1947) and Oscar Ichazo (b. 1931). Gurdjieff claimed to have learned the Enneagram from the Sufis (a mystical spin-off sect of Islam), though many dispute this.

Psychiatrist Claudio Naranjo (b. 1932), a pioneer of New Age related psychological theories, breathed new life into the Enneagram by refining it as a tool of psychological assessment in which a person discovers his number in the chart, and then studies the best and worst traits of that number via the diagram. Each number represents a particular personality type, and is connected to two other numbers, one which supposedly highlights the worst traits, and the other representing the best.

Gurdjieff was an Armenian teacher of esoteric spiritual philosophies based on knowledge he allegedly garnered during travels and contacts with secret groups, which are recounted in his book, Meetings with Remarkable Men (in the beginning years of her New Age journey, the writer of this article saw a movie based on this book and was strongly influenced by it). However, these accounts were never verified. Gurdjieff held that man is not aware of true reality and needs an awakening of consciousness. He is widely credited as the first person to make the Enneagram publicly known.

Oscar Ichazo, heavily involved in psychedelic drugs and shamanism,* asserted that he had "received instructions from a higher entity called Metatron" and that his group "was guided by an interior master."

Naranjo, the psychiatrist who studied with Ichazo in Chile, passed on the Enneagram teachings to Jesuit Bob Ochs, who then brought it into Roman Catholic circles at the New Age Esalen Institute in Big Sur, California, where Naranjo taught (entire comment from my Enneagram article).

The so-called "Christian monk," Evagrius Ponticus, was influenced and inspired by the esoteric philosophy of Neo-Platonism, a deadly mixture of Gnosticism and Christianity. Ponticus was also a student of the heretical teachings of Origen of Alexandria. Ponticus himself was later condemned for his teachings in 400 and 533.

Ponticus held that Jesus was not the incarnated Son of God, but rather a sinless "intellect" who assumed a body to show humanity the way back to its "original union" with God. This is a Gnostic teaching. Through Ponticus, these false teachings spread to monastic leaders and theologians (comment quoted from my Enneagram article).
CHRISTIANITY TODAY
"During his tenure in Alexandria, Ponticus developed a list of deadly thoughts: vainglory, anger, greed, gluttony, sloth, sorrow, pride, and lust, to which he added 'love of self' as the first thought of all. This list provided the blueprint for what were to become the Seven Deadly Sins of the Catholic Church, which Pope Gregory I would assemble from this list some 200 years later."

These sins can be found listed in the Bible but this list is not directly from the Bible. However, Proverbs 6 does list seven “things which the Lord hates” –


"There are six things which the Lord hates,  Yes, seven which are an abomination to Him:Haughty eyes, a lying tongue,  And hands that shed innocent blood,A heart that devises wicked plans,  Feet that run rapidly to evil,A false witness who utters lies,  And one who spreads strife among brothers."


CHRISTIANITY TODAY
"…..The fact that it [the Enneagram] is rooted in a fundamentally dark view of humanity—that we are sinning people who are inclined to sin in specific ways*—isn’t exactly a cheerful view."

MY COMMENTS
Not true – the Enneagram is not rooted in concept of sin, either from its mystical Gnostic origins nor its New Age psychology origins.
CHRISTIANITY TODAY
"…..But the real power in the Enneagram lies in its ability to expose the dark underbelly of every person—their sin pattern.*…."
MY COMMENTS
This is not true. This was never the purpose of the Enneagram nor can it do this.
CHRISTIANITY TODAY
"….Other people will have other issues, but in knowing mine, I can be better equipped to pray, to confide in trusted friends, to read the truths of Scripture."

We only can know our sins through the Enneagram? The truth is that we discover and know what sin is from the Bible. There is no need for the use of the Enneagram to “reveal” sins. Furthermore, the Enneagram cannot reveal anything about a person. One might as well classify him/herself using astrology.
CHRISTIANITY TODAY
"Every night at 9:40 p.m. I get an email from the Enneagram Institute."
MY COMMENTS
The website for The Enneagram Institute openly refers to concepts from Gurdjieff and company, such as "the Work" and "inner work," to refer to mystical work on the inner self. This "Work," as expressed by Ichazo, involves transcending one's ego in order to find one's "Essence." This is fundamental in Gnostic-based, Eastern, and New Age views.

The Enneagram Institute itself admits that "the philosophy behind the Enneagram contains components from mystical Judaism, Christianity, Islam, Taoism, Buddhism, and ancient Greek philosophy (particularly Socrates, Plato, and the Neo-Platonists)." (online source)

■ The origins of the Enneagram, though disputed, are spiritually based, not as a tool for personality assessment, which came later.

■ The categories are arbitrary with no objective basis.

■ While some things may be true about your “number,” it is likely that the traits described would fit most people as we all have common sin issues, especially from pride, which we all share and which is the source of other sins/problems.

■ The goal of the Enneagram originally (and still used this way today in New Age practice) is awakening to true “Self” and “The philosophy for this is directly derived from the esoteric values of Sacred Geometry and from Gnostic views of the self as sacred and pure in essence” (from my article).

■ A Christian should strive to view himself through God's word; man-based categories detract from and may blur or negate that perspective.

■ Focusing on the self easily leads to self-absorption.

■ Christians are being made whole and complete in Christ (Philippians 1:6; Colossians 2:10; 2 Timothy 3:17) through the sanctifying work of the Holy Spirit.