Catholicism is Not Just Another Christian Denomination

Is Catholicism just another Christian denomination? I know many Christians who declare this to be so, including Christian leaders. But is this actually true? Are the differences between Christianity and Catholicism so minor as to be just a trifle, as incidental as whether or not you stand or sit when you sing or pray during a worship service?

I was recently "unfriended" on Facebook by a friend who told me couldn't take what she considered harsh treatment of Catholics in some of my postings. What I told her is that I have always-always-always clearly stated that I do believe there absolutely can be truly saved people within the Catholic church. It's just that, unless death claims them first, a true born again believer WILL come out of the Catholic church, eventually. I don't hate Catholics, I hate Catholicism, because it keeps Catholics in bondage, it keeps them so busy doing all their works and their sacraments that they can be tricked into thinking they are right with God. (And isn't Satan so very good at devising works-driven systems for keeping lost people busy? Busy all the way to their deaths, that is, at which time they will understand the truth.) Well, I want them to be set free (John 8:32). (My friend, incidentally, became very Catholic-sympathetic, after she started working as a teacher at a Catholic school. So I kinda saw it coming.)

If you are a Christian, and you are unsure of the doctrinal differences between Christianity and Catholicism, please look at the attached charts (click on these charts to see a more readable size). These charts were compiled by Richard Bennett, a former Catholic priest. Richard Bennett was a Roman Catholic priest for 21 years. Now think on this: Catholics are trained to look up to their priests and to think that their priests have a greater understanding of the Bible. But, if you listen to Bennett's testimony, he makes it clear that this is not true: Catholic priests are taught very little - very little! - actual Bible in seminary, and are instead trained in the Catholic writings. And yet, Catholics put their trust, their eternal trust, and faith in these men whom they believe have more Bible knowledge.

So how did a Roman Catholic priest of 21 years come to saving faith? A debilitating accident put Catholic priest Richard Bennett flat on his back, and he began to read the actual Bible......and he got saved! The way to salvation IS clearly presented in the Bible, but sadly, many Catholics don't read and study their Bibles, and thus don't know this. 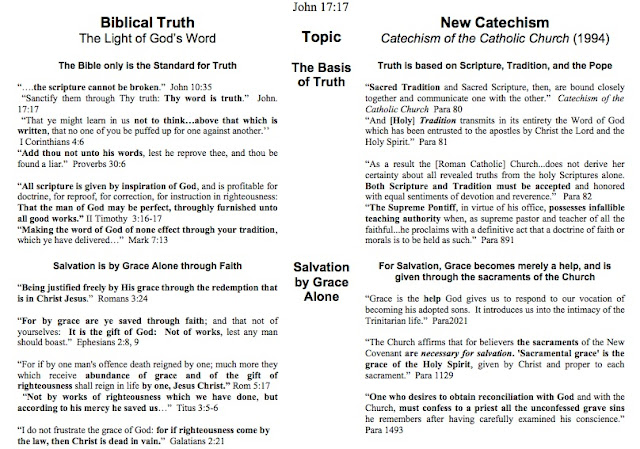 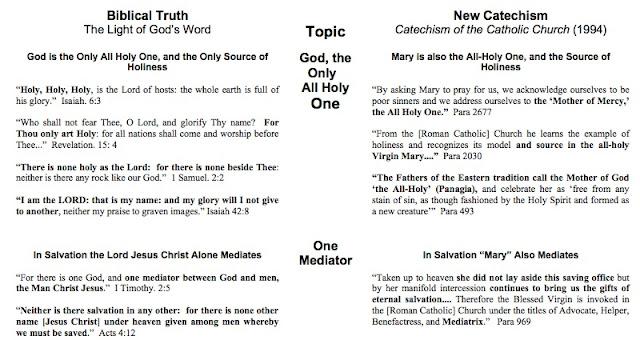 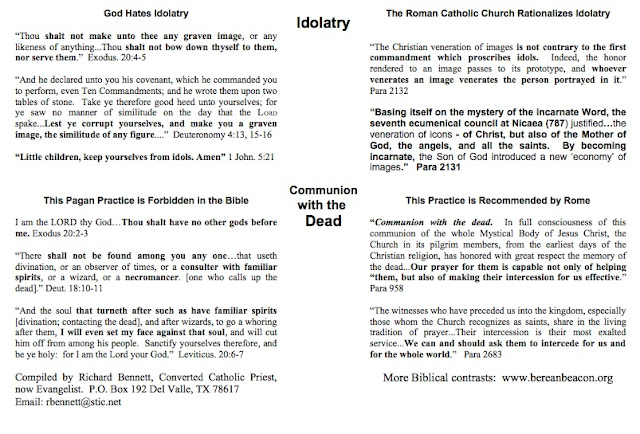 Posted by Christine Pack at 1:02 PM