Before anyone gets all excited about tomorrow being 11/11/11, let's just settle down and recognize that looking for patterns in circumstances or nature is a pagan practice! I'm reposting an article I wrote last year (right before last year's "big" numerological event - 10/10/10). This numerology stuff is big in the New Age, but it has no place among Christians! God gives us all that we need for life and godliness in his Word (2 Peter 1:3).


"Brides and grooms across the UK are staging a romantic rush to tie the knot on the most memorable date of the year.....10-10-10.  All around the world, the attraction of saying 'I do' on an unforgettable date has sparked a massive rush by couples to organise their big day for the 10th day of the 10th month of the 10th year of the century.  Bride to be Alice Huo said: 'A good beginning is half the success of a marriage. We believe that a good date will allow us a good beginning.'  Brides magazine says that last year, 9-9-9 was particularly desirable, especially with the Chinese, as in their culture, every single digit number has a meaning, and for them, 9 stands for longevity.  Also, three digit numbers are preferred over two or four digits, because three is a yang number and it stands for liveliness in Cantonese. "(Daily Mail UK/online source)

One website attempts to imbue this date with significance by claiming a link to the paranormal, metaphysics, chaos theory, destiny, fractals, etc.

Another website promotes an enter-to-win giveaway package, in which 10 lucky couples will win a trip to Las Vegas for the weekend of 10/10/10. That's right, gamblers - who are also romantics! - can get hitched and try to hit the jackpot on one lucky weekend.

Getting married on a "lucky numbers" day?  "Seeing" supernatural significance in numbers that coincide? Scheduling special trips to commemorate the date?  In spite of our supposed sophistication today, isn't this kind of thing, well, suspiciously superstitious...and dare I even say, somewhat pagan? 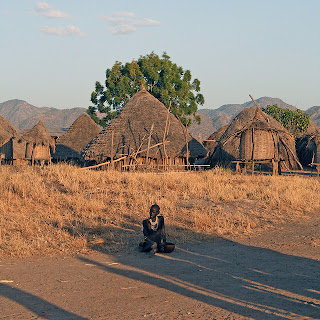 In today's world, paganism is often regarded as a nature religion, far removed from the civilized, highly developed culture we inhabit, with its multi-billion dollar economy, 24/7 television programming and Starbucks coffee.  Pagans are thought to be primitive types who sift through the natural landscape, searching for clues about who God is and what he requires of them in the hopes of coming up with a system that makes sense of what they see. As for us, we view ourselves as sophisticated, complex, intellectual.  We carry ipods and iphones and walk busy city streets, with nary a carved idol or grass hut in sight.  And yet, when people are buzzing about "lucky 10/10/10" - even to the point of planning life events around this date - are we not every bit as superstitious, even pagan, as those natives in grass huts we imagine ourselves so superior to?

The reality is that the natural default setting of the human brain is paganism.  As John MacArthur has said, there are really only two religions in the world: the kind where we reach up or the kind where God reaches down.  When we are "reaching up," it's all about trying ourselves to find the ways in which we make ourselves fit for the Kingdom of God, whatever cultural "flavor" that takes on: 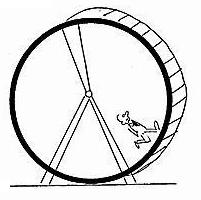 All false religions and cults have a rat wheel for its adherents to get on - and "works" for them to start churning out - in an effort to have peace.  You see, innately, all humans have eternity written on their hearts.  People instinctively know that there is a sovereign Creator God to whom they are beholden.  But how to have peace with this God? That's the eternal question.  Of all the world's religions, only Christianity answers this question satisfactorily.  We have peace with our Maker only through the means provided by Him, by God.  After all, if a Hindu or a Buddhist could achieve peace through yoga and meditation and fasting; if a Muslem could achieve peace through jihad or mecca; if a Catholic could achieve peace through the sacraments or good works, then what would be the point of the Cross?  None of the practices of other religions can bring peace because all they are are man's pitiful attempts to figure out a way to have peace with God. The systems of "works" generated by western civilization may be a little more sophisticated than the system of works designed by cultures that do rain dances and sacrifice village maidens, but they're still just works. They're still just another rat wheel to get on in an attempt to assuage our consciences.

The Cross stands as a monument to the exclusivity of Christianity - and the futility of works. Christianity is different in that Christians understand that salvation - peace with God - comes only from God, through the Cross, and not from themselves.  Peace comes from God reaching down to us, and never from us reaching up to Him.  Scripture tells us that there is "no one who is righteous," and "none who seek God."  Salvation is a gift from God, and comes not by works, so that no one can boast.

If all other religions could make a way for peace with God through adherence to some system of works, then the mantra of today's Oprah-fied culture ("All paths lead to God") would be true.  But we know it is not.  We know that only those who have been born again through repentance of their sins and faith in Christ's sacrifice on their behalf will be given that oh-so-elusive inner peace.  A true and lasting peace, rather than a cheap kind of temporary peace that comes from doing "good works" or through generating some kind of mystical religious experience.  Christianity alone offers the kind of peace that comes from knowing that - regardless of life's circumstances - we have peace with our Maker.  Makes lucky numbers and four leaf clovers seem rather small by comparison, doesn't it?

Right about now you might be thinking, "But I'm a Christian not a pagan.  I don't do any of that superstitious pagan stuff."  But remember that paganism has always tried to worm its way into the Christian church.  Think of Paul's warrning to the churches at Ephesus, Colossae and Galatia, for they were being influenced by the pagan cultures surrounding them, which were causing them to stray from the purity of the gospel.


"See to it that no one takes you captive by philosophy and empty deceit, according to human tradition, according to the elemental spirits of the world, and not according to Christ. For in him the whole fullness of deity dwells bodily, and you have been filled in him, who is the head of all rule and authority." (Col 2:8-10)

"Do not let anyone who delights in false humility and the worship of angels disqualify you for the prize. Such a person goes into great detail about what he has seen, and his unspiritual mind puffs him up with idle notions. He has lost connection with the Head, from whom the whole body, supported and held together by its ligaments and sinews, grows as God causes it to grow.  Since you died with Christ to the basic principles of this world, why, as though you still belonged to it, do you submit to its rules: “Do not handle! Do not taste! Do not touch!”? These are all destined to perish with use, because they are based on human commands and teachings. Such regulations indeed have an appearance of wisdom, with their self-imposed worship, their false humility and their harsh treatment of the body, but they lack any value in restraining sensual indulgence." (Col 2:18-23)

"And this occurred because of false brethren secretly brought in (who came in by stealth to spy out our liberty which we have in Christ Jesus, that they might bring us into bondage), to whom we did not yield submission even for an hour, that the truth of the gospel might continue with you." (Gal 2:4-5)

"[T]hat we should no longer be children, tossed to and fro and carried about with every wind of doctrine, by the trickery of men, in the cunning craftiness of deceitful plotting,  but, speaking the truth in love, may grow up in all things into Him who is the head—Christ—" (Eph 4:14-15)

So what does paganism in the modern American churches look like? It's all of the above practices, strategies, doctrines, including yoga, mantra meditation, binding demons and breaking so-called demonic spells, asceticism, dream interpretation and a fascination with numbers and dates.  But, it can also be more subtle, as in a Christian form of "works righteousness," with never-ending "how to" lists, tips, 5-point plans, and do's and don'ts.

But it is Christ who is the One who has done the work of salvation - not us.  Nor can we add to it.  Paul reminds us:


"It is for freedom that Christ has set us free. Stand firm, then, and do not let yourselves be burdened again by a yoke of slavery.  Mark my words! I, Paul, tell you that if you let yourselves be circumcised, Christ will be of no value to you at all. Again I declare to every man who lets himself be circumcised that he is obligated to obey the whole law. You who are trying to be justified by law have been alienated from Christ; you have fallen away from grace. But by faith we eagerly await through the Spirit the righteousness for which we hope. For in Christ Jesus neither circumcision nor uncircumcision has any value. The only thing that counts is faith expressing itself through love." (Gal 5:1-6)

And then Jesus himself spoke to us these words:


"Come unto me, all ye that labour and are heavy laden, and I will give you rest.  Take my yoke upon you, and learn of me; for I am meek and lowly in heart: and ye shall find rest unto your souls.  For my yoke is easy, and my burden is light." (Matthew 11:28-30)

If you are a Christian, and you have become ensnared by any worldly teachings, works righteousness or superstitions - even perhaps while sitting under very popular or well-liked pastors or teachers - I urge you not to put your hope in pagan superstitions or your own work, and turn back to the purity of the gospel.  Repent, and run to Christ, where you can receive forgiveness and be freed from the bondage of "futile thinking" and "vain imaginations." (2 Cor. 10:5, Rom 1:21-22).