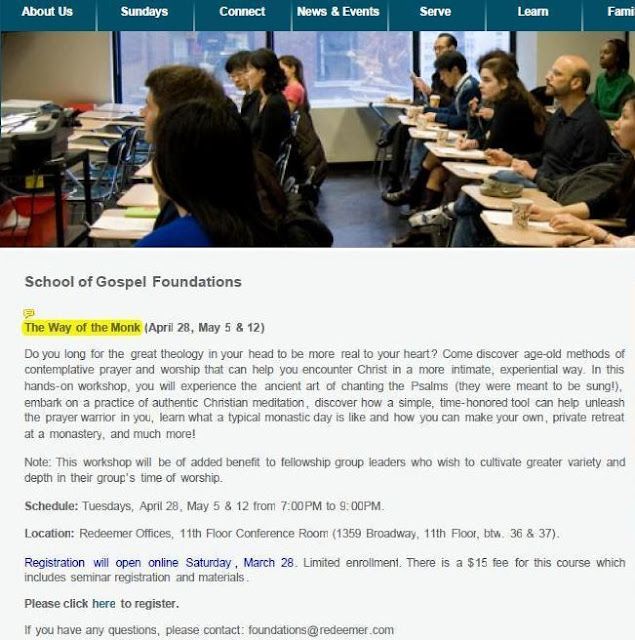 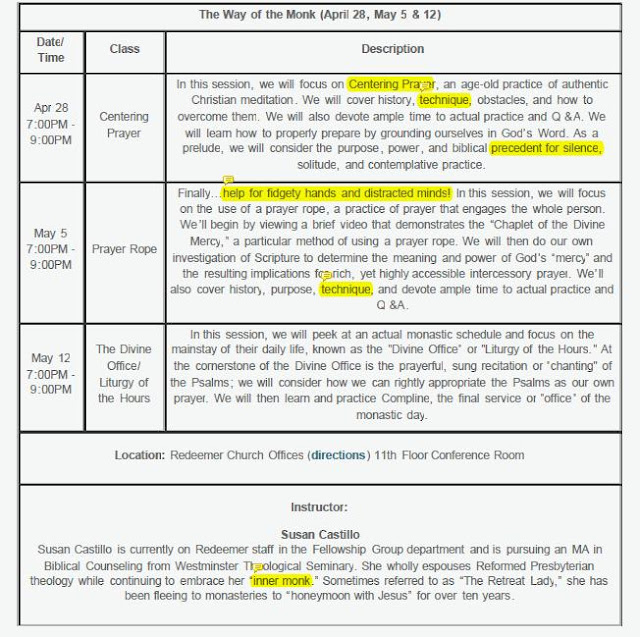 "The Way of the Monk" at Tim Keller's Redeemer Presbyterian Church

Lectio Divina at Tim Keller's Redeemer Presbyterian Church - material adapted from the book Sacred Companions by David Benner. (From David Benner's bio: "I first heard of spiritual direction through reading Dostoevsky’s The Brothers Karamazov, and this quickly led me to an engagement with the Orthodox tradition of the Christian faith. It was here that I encountered the Jesus prayer – a gift from the Russian Orthodox Church – something that was to change the way I opened myself to God in prayer for ever. Here I also encountered the gift of using icons as an aid to prayer. This led me back to the Christian mystics I had long been attracted to but not ready to really engage, and to the discovery of the Benedictine and Cistercian traditions of centering prayer and lectio divina..... I discovered the Sufi mystical poets, Hafiz and Rumi, people who have been intimate spiritual companions since that first meeting. Within a few years, my wife and I were blessed to be invited to spend several extended periods of dialogue with Buddhists and Taoists at the Tao Fong Shan Centre for Christian Spirituality and Interfaith Dialogue in Hong Kong. Once I tasted the richness of meeting people of other faiths in this sort of sacred place there was no turning back. I quickly discovered that I had more in common with those on a spiritual journey within other religious traditions than I had with Christians who had allowed faith to be reduced to beliefs and counted the holding of these beliefs to be their journey. It remains so to this day.")
Posted by Christine Pack at 10:23 AM