I have never bothered to address the problems with the book The Circle Maker, because the whole concept of "circle making" was simply so patently pagan and ridiculous on the face of it that I assumed it would be obvious to any Christian how unbiblical this book was.  When Christian apologist Chris Rosebrough and Pastor Tim Challies both thoroughly exposed the theological issues with the book (links below), I continued to assume this was a "no-brainer" for most Christians. Sadly however, I am getting more and more emails from people saying that their church leaders are recommending The Circle Maker, doing a Bible study with it, passing it out, etc. So just in case you have not heard about this book, let me try to fill in the gaps: The Circle Maker is a book authored by Pastor Mark Batterson (Wash DC), in which Batterson teaches that we should literally draw circles (with chalk as the suggested implement) around our dreams and pray them into completion. From the Amazon website:


"According to Pastor Mark Batterson in his book, The Circle Maker, 'Drawing prayer circles around our dreams isn't just a mechanism whereby we accomplish great things for God. It's a mechanism whereby God accomplishes great things in us.' Do you ever sense that there's far more to prayer, and to God's vision for your life, than what you're experiencing? It's time you learned from the legend of Honi the Circle Maker---a man bold enough to draw a circle in the sand and not budge from inside it until God answered his prayers for his people. What impossibly big dream is God calling you to draw a prayer circle around? Sharing inspiring stories from his own experiences as a circle maker, Mark Batterson will help you uncover your heart's deepest desires and God-given dreams and unleash them through the kind of audacious prayer that God delights to answer."

Well, as a former pagan, I'm just telling all of you right now, if someone comes into my church and starts getting out the chalk and talking about drawing circles around things, I am not walking, I am RUNNING for the door. And yes, I know the argument is probably something along the lines of, Well this helps me underscore my prayers to God. My response: Really? And this is where, exactly, in Scripture? And why should a Christian feel the need for a ritual? Why can't we just pray, simply, with the faith of a child? My friends, spiritual rituals are for pagans, not Christians.

Still unconvinced? How about this example straight from Scripture of a pagan spiritual ritual given a glossy biblical veneer: the incident of the golden calf whereby Aaron, who was leading the congregation into sin, made a verbal profession that this would be "a festival unto the Lord." In other words, he was attempting to Christianize his golden calf by claiming that he would be offering it up to the God of Israel. But then, as now, one's verbal profession or intention is not some sort of magical protection: when we do pagan things, we are in sin, and God is not pleased.


"Aaron answered them, 'Take off the gold earrings that your wives, your sons and your daughters are wearing, and bring them to me.' So all the people took off their earrings and brought them to Aaron. He took what they handed him and made it into an idol cast in the shape of a calf, fashioning it with a tool. Then they said, 'These are your gods, Israel, who brought you up out of Egypt.' When Aaron saw this, he built an altar in front of the calf and announced, 'Tomorrow there will be a festival unto the Lord.'" (Exo 32:2-5, my emphasis)

All right, Sola Sister, I hear some of you saying. You are preaching to the choir here. This is not happening in our circles. Oh really? Then I present Exhibit A for your consideration: 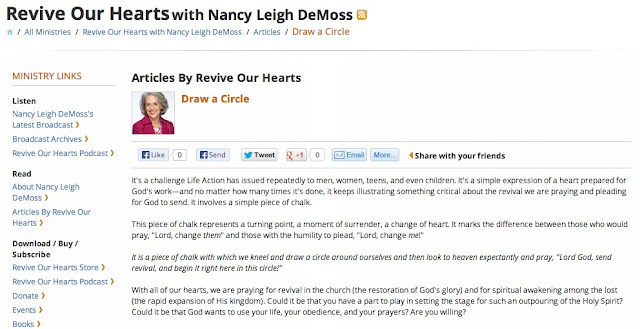 Yes, that is the theologically buttoned up Nancy Leigh DeMoss, host of the Revive Our Hearts radio ministry, in the above screenshot (which can be clicked on for better reading), and who must surely be counted among those who should know better than to endorse such pagan nonsense. Yet here is her quote in full, from her article, Draw A Circle:


"It's a challenge Life Action has issued repeatedly to men, women, teens, and even children. It's a simple expression of a heart prepared for God's work—and no matter how many times it's done, it keeps illustrating something critical about the revival we are praying and pleading for God to send. It involves a simple piece of chalk. This piece of chalk represents a turning point, a moment of surrender, a change of heart. It marks the difference between those who would pray, 'Lord, change them' and those with the humility to plead, 'Lord, change me!' It is a piece of chalk with which we kneel and draw a circle around ourselves and then look to heaven expectantly and pray, 'Lord God, send revival, and begin it right here in this circle!'" (online source)

In addition to the above article, Nancy Leigh DeMoss also spoke at a True Woman Conference in September 2012, and according to an article on the True Woman website, chalk circles were drawn throughout the conference room, and participants of the conference were encouraged to utilize these circles for prayer. And as a clever little marketing tie-in, the participants were sent home after the conference with little goody bags containing, that's right, chalk, so that they could all go home and perform their own pagan rituals, umm, prayer circles.

So if we are not meant to draw chalk circles around our big dreamy dreams and then ask God to rubberstamp our desires, how then are we to pray? Jesus taught us plainly in Matthew 6 that there is no ritual involved in prayer: we are simply to go to the Lord, and speak to Him plainly:


“And when you pray, you must not be like the hypocrites. For they love to stand and pray in the synagogues and at the street corners, that they may be seen by others. Truly, I say to you, they have received their reward. But when you pray, go into your room and shut the door and pray to your Father who is in secret. And your Father who sees in secret will reward you. And when you pray, do not heap up empty phrases as the Gentiles do, for they think that they will be heard for their many words. Do not be like them, for your Father knows what you need before you ask him. Pray then like this: Our Father in heaven, hallowed be your name. Your kingdom come, your will be done, on earth as it is in heaven. Give us this day our daily bread, and forgive us our debts, as we also have forgiven our debtors. And lead us not into temptation, but deliver us from evil.” (Matthew 6:5-13)

My brothers and sisters, Nancy Leigh DeMoss's unexpected endorsement of the pagan ritual of circle making is simply more evidence that, just as in Moses' time, human hearts crave tangibility and ritual. And yet, we are meant to be a people who walk by faith, and not by sight.

"Now faith is confidence in what we hope for and assurance about what we do not see." (Hebrews 11:1)

Let this serve as a cautionary tale for us: no matter one's pedigree or theology, any of us can be deceived and go astray. May we pray for ourselves and for each other that God might keep us pure and unpolluted from the increasing mysticism we find around us, not only in the culture at large but sadly, in the church as well.

The Book of Hebrews: Our Firewall Against Paganism and The Desire For Tangibility (CIC Radio)

Draw A Circle (Nancy Leigh DeMoss)
Posted by Christine Pack at 12:30 AM