For anyone wanting to hear a balanced discussion about a movement within conservative Christianity known as the Quiverfull/Patriarchy movement, and the problems with it, please listen to the program entitled "Bully Pulpit: Sinister Headship" on Carl Trueman's Mortification of Spin radio show. The guest is Rachel Miller of The Aquila Report who recently wrote an article entitled The Soul-numbing Dangers of Patriarchy. (For anyone wanting an even more in-depth discussion of Quiverfull/Patriarchy, I highly recommend this radio series by Christian author and researcher Karen Campbell - Part I - 9 programs, Part II -14 programs.) 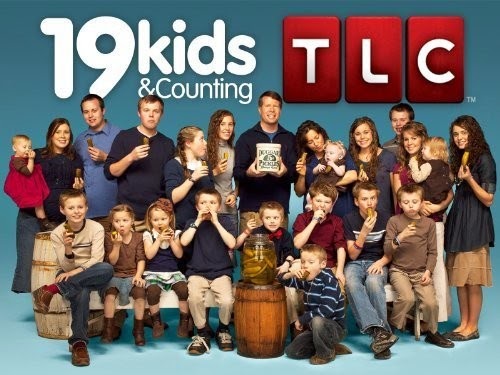 During the discussion on the Bully Pulpit program, Trueman and Miller name the popular Duggar family as a "cleaned up" example of the Patriarchy movement. Many would say, but they are so wholesome and always look so happy! Here's one little Patriarchy insider tip: those within the movement MUST always look happy. An "unhappy countenance" is considered a sin against the father, and is an infraction that might cause that person to be disciplined or even shunned from their community. So Patriarchy adherents might look happy because they genuinely are, OR, they might be adhering to the "happy countenance" rule. I don't know about the Duggars, and I also don't think it's possible to gauge where they stand by watching a television show: perhaps they are genuinely happy and wholesome and loving, and perhaps there is truly a balanced and loving relationship between Michelle Duggar and her husband, Jim Bob. I sincerely hope that that is the case. But the Duggars notwithstanding, here are some potential abuses that can occur within Patriarchy, according to Trueman and Miller:


- The husband considering himself, and acting as, his wife's high priest and mediator

- A "sanctified" form of spousal abuse

- Wife spanking (Yes, you read that right, and yes, it is exactly what it sounds like. "Wife spanking" is also known as "Christian Domestic Discipline," and is something that Pastor Trueman said would cause him to institute church discipline immediately if he found it in his church)

- Little to no accountability for the leaders of Patriarchy, who have set up their own cult-like empires


- Bill Gothard (and the ATI/IBLP teachings, Gothard has now resigned due to charges of sexual inappropriateness)

- Doug Phillips (the former president of Vision Forum, Phillips has now resigned due to a sexual abuse lawsuit brought against him by the former nanny to his children)

In posting this program, please understand that we are NOT bashing big families. Nor are we saying that parents shouldn't have rules for their children. We are not saying that having rules in your family is legalism. We all must remember Romans 14 as we have this discussion. Any Christian who passes judgment on their sister for having a lot of children violates the "law" of love that Paul is pointing to. Anyone who passes judgement on a sister for not homeschooling her children violates the same law.

So again, we're not condemning anyone for their choices in non-essential areas, nor are we condemning men and women who perhaps grew up under more liberal teachings, and who became involved in this movement out of a genuine and sincere desire to lead their families (for the men) and biblically submit to their husbands (for the women). We're not condemning, not even a smidge. Cathy and I (Christine) both did a season of homeschooling with our children. Both of us submit to our husbands. It's not about that: it's about the extrabiblical laws that those within the Quiverfull movement add to their Christian walks. Quiverfulls also often refuse to have fellowship with others who choose NOT to add these things to their Christian walks. Now, how is that biblical among Christian brothers and sisters? I'm talking about such extrabiblical laws as these:

I'm sure I'm missing a few of the extrabiblical rules, but that's just off the top of my head. But we need to remember that Jesus condemned such extrabiblical law-making with the Pharisees, which means that we should also be on guard against such things in our own Christian walks. The Pharisees looked at God's Laws, and said, "Oh okay, Honor the Sabbath and keep it holy? That's a great Law. In fact, it's so great, we're gonna help God along here and add even more rules to the Sabbath in order to make sure everyone is honoring the Sabbath in the way WE think is best." These were extrabiblical laws (i.e., instructions not explicitly given from God), which are, by the way, expressly forbidden by God (Deut 4:2). And from there, the Pharisees springboarded into adding rules for the Sabbath about what a person could carry or not carry (heavier than *this* but lighter than *that*), about whether or not a man could shave, could get a bucket of water from a well, write something down, etc., etc. God gave the Sabbath to man to bless man (Mark 2:23-27) but in the hands of the legalistic Pharisees, the blessing became a curse. Well, isn't this exactly what the legalism in Quiverfull is about? You have to homeschool or you are sinning against God. You have to wear skirts *this* length. If your children don't find their spouses through courtship, they are sinning (and you are too, if as their parent you allow them to find spouses a different way). You are sinning if you go to the movie theater. You are sinning if you have a TV in your house. Etc. Etc. Etc.

We're not saying it's wrong or sinful for each Christian family to make personal choices in these areas that bless their families. What we're saying is, where something is not explicitly stated in Scripture, we need to tread very, very carefully, and make sure that we're not turning what is our blessing into another person's Law, which becomes bondage for them. Here's a very specific example. I have a friend who was told by some of her fellow Christians that it was a sin to send children to public school. My friend, however, had been divorced by her husband after he had an affair. She had to work. And neither could she afford private Christian schooling for her children. And thus, her children were in public school. By the time I met her, she had been in profound bondage for several years, thinking that she was sinning against God by having her kids in public school.

There needs to be more charity and grace amongst Christians in non-essential areas. We must not make our blessings into laws for others. And we also need to remember that there is no formula that works all the time, for all Christian families, as in, raise a child in *this* way and you will turn out a perfect Christian product. It doesn't work that way. I've known families who sent their children to Christian or even public schools that ended up with what seem to be Godly Christian children, and some homeschooling families that ended up with very rebellious children. Same thing with courtship. In fact, Joshua Harris, author of Boy Meets Girl, which details the courtship method, has had to edit and re-release his book because two of the featured "courtship dating" couples in the book ended up divorcing. An inconvenient fact like that is certainly apt to take the wind out of the sails of those who think that creating and living in a lifestyle of systematized legalism is a safeguard against sin.  After all, we know from the Apostle Paul that legalism does not have the capacity to restrain the flesh; indeed, it can only serve to it inflame it.


"Once I was alive apart from the law; but when the commandment came, sin sprang to life and I died. I found that the very commandment that was intended to bring life actually brought death. For sin, seizing the opportunity afforded by the commandment, deceived me, and through the commandment put me to death." (Romans 7:9-11)

In closing: please understand, again, that the purpose of this article is not to attack or mock or denigrate large families or wives submitting in marriage. It is to point out the extrabiblical rules associated with Quiverfull and Patriarchy. I (Christine) have personally counseled women who were involved with these movements who were in profound bondage because of the teachings associated with them, and I don't desire for anyone to become enslaved in a man-made system of works righteousness, and thereby miss the beauty and simplicity that is found in Christ. There truly is freedom and joy in Christ.

What Are The Quiverfull and Patriarchy Movements? (Got Questions?)
Patriarchal Figure R.C. Sproul Jr Says that the Scandal of Josh Duggar Having Had An Ashley Madison Account Is None of Our Business - Then Responds When his Own Visit to the Ashley Madison Site is Discovered (RC Sproul Jr website)

A Matter of Basic Principles: Bill Gothard and the Christian Life

Is Jesus a Sinner According to Bill Gothard’s Teachings?

If Bill Gothard is Wrong, Then What’s Right?

Bill Gothard: Who Knew What and When? A Question of Accountability

An Evening With Bill Gothard

Secular Articles
When Having Kids Is A Religious Experience (ABC News)