We Love Because He First Loved Us

Year 27: Working to Get the Bible Translated for the Ehty People of South Asia
Posted by Christine Pack at 3:13 PM 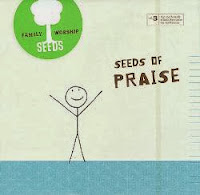 We have recommended the Nashville-based Seeds Family Worship ministry before as a great resource for teaching Bible verses to children (and adults, too). Well, we're happy to let you know that Seeds Family Worship is currently offering a great special through Thanksgiving: their entire Seeds of Praise album....for FREE! Simply follow this link, and then follow the friendly and easy instructions once you get to the download page, and before you know it, you'll be singing along (and memorizing) Psalm 86:11-13, Psalm 46:10, 1 Chronicles 16:9-10, Revelation 148:1-5,  Psalm 136:1-6,  Zephaniah 3:17, and more.

Sons of Korah: A Recommended Resource

A Few Thoughts on Christian Music
Posted by Christine Pack at 3:06 PM

Ladies, do you have friends who have been taken in by the über popular book Jesus Calling? You almost can't miss this book, which has been a bestseller on Christian book lists for several months now, and has spawned many derivatives: devotionals, teen and children's versions, even a study Bible. But is it a biblically sound book?

Former New Ager Former New Ager Warren Smith says "no," it's not a biblically sound book, and explains in an interview on Stand Up For The Truth radio that the channeled entity in Jesus Calling is NOT the Jesus of the Bible, but a demonic counterfeit instead. Warren Smith is also the author of the just released book entitled "Another Jesus" Calling

, which explores the problems with Sarah Young's book in greater detail. The title of Smith's book is taken from 2 Corinthians 11:4:

If you have friends who have been taken in by this book, you will want to forward this interview with Warren Smith to them.

Jesus Calling By Sarah Young: W.U.I. (Writing Under the Influence) 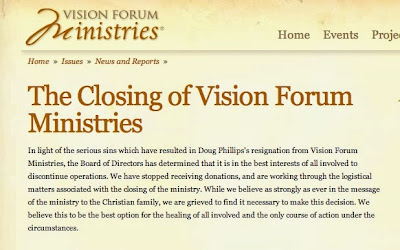 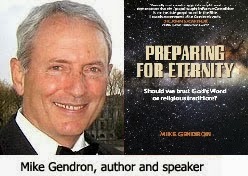 Christianity vs. Roman Catholicism - A Side-By-Side Chart of the Beliefs

Click on the graphics below in order to better view the charts. 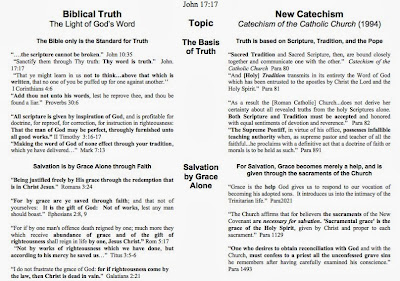 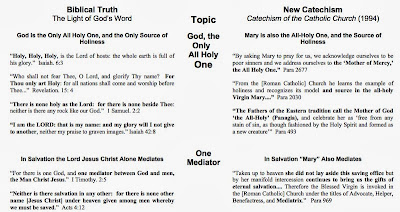 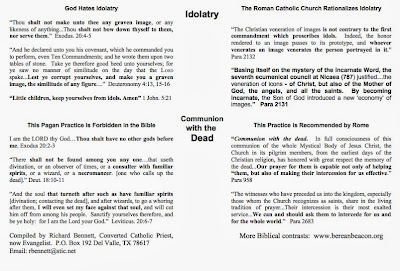 A List of False Teachings In The Catholic Church (CARM)

Mother Teresa Did Not Feel Christ's Presence for Last Half of Her Life, Letters Reveal (Fox News)

An Interview With Tim Challies: John MacArthur Responds to Critics of the Strange Fire Conference

In the aftermath of the Strange Fire Conference hosted by John MacArthur last month, a conference meant to expose and address wildly unbiblical excesses in the Charismatic movement at large (angel feathers, gold dust, glory clouds,"grave sucking," getting "drunk" in the spirit, etc.), Tim Challies, a non-Charismatic who is nonetheless well-regarded in the Young, Restless and Reformed (YRR) movement (Mark Driscoll, John Piper, Wayne Grudem, etc., many of whom are Charismatics), conducted a brief interview with Dr. MacArthur about some lingering questions that remain in the minds of some Charismatics.

Some examples of "grave sucking," for those unfamiliar with this new Charismatic practice: 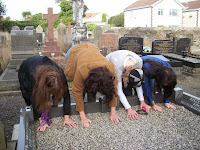 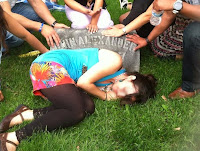 It would be an understatement to say that this practice of "grave sucking" is obviously well outside of Christian orthodoxy. But above and beyond these practices being taught by Bill Johnson of Bethel Church in Redding, CA, and other TBN excesses, there is a Reformed Charismatic movement (Driscoll, Piper, Grudem, et al, mentioned above) that has long positioned itself as the Charismatics who "get it right," and as the ones who are theologically buttoned up (which they are). But as Dr. MacArthur labored to explain during the conference itself, and again reinforced in his interview with Tim Challies, he does not state or even imply that all Charismatics are lost or that they engage in these unbiblical practices (though while the conference was ongoing, I saw many online claims that the speakers of the conference were"painting with a broad brush," something Phil Johnson of GTY has addressed here).

Also, something that makes this interview all the more interesting to me is that Tim Challies (himself a "convinced cessationist who points to John MacArthur's groundbreaking 1993 book Charismatic Chaos as being instrumental in shaping his thinking in this area) is extremely well-regarded and influential in the Reformed Charismatic camp. One can only hope that his balanced view on Continuationism vs. Charismaticism will help to reform some of the thinking on this matter in the YRR movement.

With respect to the dangers of charismatic thought, Dr. MacArthur states that some of the secondary issues of Charismatic belief and practice could possibly confuse how a person understands the gospel message, which of course is not a secondary issue, but a primary one. From the interview:


Tim Challies: There are some matters the Bible makes absolutely clear (e.g. You must trust in Christ alone for your salvation) and some things that continue to perplex us so that even genuine, Bible-loving Christians can disagree on them (e.g. baptism and the miraculous gifts of the Holy Spirit). Why does God allow questions like these to remain unclear to us? Why are you taking such a strong stand on what is really just a secondary issue?

John MacArthur: "I would agree that this is a second-level doctrinal issue—meaning that someone can be either a continuationist or a cessationist and still be a genuine follower of Jesus Christ. I have always maintained that position, and I reiterated that point several times during the conference. I have good friends who consider themselves continuationists, and I am confident that these men are fellow brothers in Christ. But that doesn’t excuse the seriousness of the error. In fact, I would appeal to my continuationist brethren to reconsider their views in light of what Scripture teaches......On the other hand, I am firmly convinced that this secondary issue has the very real potential to taint a person’s understanding of the gospel itself. In such cases, it becomes a primary issue."

The entire interview can be read here.

Clouds Without Water, video preview
Posted by Christine Pack at 10:50 AM