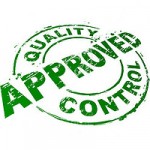 Desiring God 2010 is now underway, with Dr. John Piper giving a big speaking platform (not to mention his stamp of approval) to keynote speaker Rick Warren, pastor of Saddleback Church.  I think we are all concerned for Dr. Piper (in varying degrees) because of this, especially, as I have noted before, because Rick Warren - probably more than anyone else in America - has been the one person who has single-handedly done more to drive true gospel preaching out of today's churches.  And yet, ironically, he has been invited to speak at one of the most respected forums in the nation for putting the spotlight on bringing true gospel preaching back into today's churches.

"When someone says 'We worship the same God' reply 'Really? My God is Jesus Christ' It instantly clears up confusion." 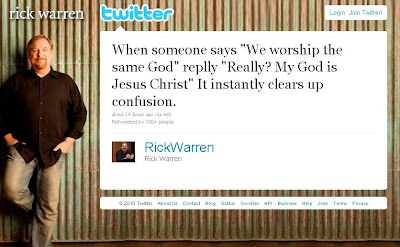 And yet, Rick Warren, when invited to speak at Sinai Temple's Shabbat services in Los Angeles, CA "managed to speak for the entire evening without ever mentioning Jesus," according to writer Rob Eshman, writer of Jewish Journal.com.  And that was a good thing, according to Eshman, a Jewish writer attending the service who speaks glowingly of Warren's "eloquence, charisma and passion," calling the Jesus-less message "a testament to (Warren's) savvy message-tailoring."

Writes Eshman, "Warren told (Rabbi Ron Wolfson, organizer of the event) his interest is in helping all houses of worship, not in converting Jews. He said there are more than enough Christian souls to deal with for starters."

"(C)ertain men whose condemnation was written about long ago have secretly slipped in among you. They are godless men, who change the grace of our God into a license for immorality and deny Jesus Christ our only Sovereign and Lord." (Jude 4, my emphasis)

So the question is, with the influence and power that Warren has, why would he not take every opportunity to boldly proclaim Jesus Chris and him crucified, such as the opportunity presented to him when he stood in a Jewish temple in front of an entire audience of lost people? This is a denial of the gospel, a denial of Jesus Christ our Lord, and Christians must not yoke with this man and thereby give credibility to his soul-damning, Christless Christianity.  It doesn't matter what Rick Warren tweets to his followers on Twitter.  The problem with Rick Warren is that he's not clearing up any confusion at all......though his tweet rather pompously makes it look like he is orthodox, evangelical, and ready to trumpet Christ at every opportunity. But what about all those people in the room when he spoke at the temple? He wasn't standing up at that podium declaring the narrowness and the exclusivity of Christ....he was being ecumenical. He cared more about being accepted than he cared about their souls. What's going on with Rick Warren is "file cabinet orthodoxy," a phrase coined to describe a pastor who is solid on paper, a pastor who, when pressed, will pull an orthodox doctrinal statement out of his file cabinet, but who, in practice, routinely diminishes or outright denies the gospel message.  Why is Dr. John Piper yoking to such a man?  Where is the discernment?