Reprinted in part from Crosstalk blog, by Ingrid Schlueter 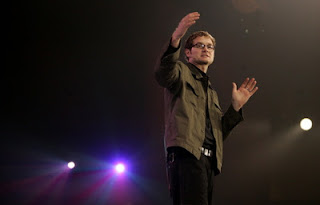 Rob Bell’s 40,000 something followers on Twitter were treated to this tweet where Bell calls New Age Interspiritualist author Huston Smith’s book “great.”  See tweet here. And here Huston Smith holds forth on one of the world’s religions. YouTube is filled with Mr. Smith’s praise for Hinduism, Buddhism and other world religions and their “truth.” Christianity is just one of many choices, according to Smith.

Why should this be especially alarming? Because Rob Bell is a rock star among today's youth and church youth leaders.  His books (Sex God, Velvet Elvis, Drops Like Stars, etc.) have been bestsellers, and his NOOMA videos are shown in church youth groups all across the country.  Discerning, mature Christian adults may "get" why Rob Bell is dangerous, but it is the children and the youth who are being targeted and indoctrinated into Rob Bell's interfaith religious syncretism, sometimes right under their parent's noses.

We can thank Rob Bell for openly admitting what many of us have been warning about for years. He represents a version of Christianity that is, in fact, anti-Christ. While Bell roots around in the books of rank interspiritualists for “truth”, true Christians look to our only and final authority, the unchanging Word of God.