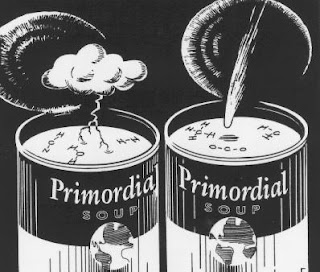 File this one under "Why Do We Still Believe Discredited Scientific Experiments?"

Miller-Urey were the scientists who created the now very famous 1952 experiment that supposedly proved evolution. When people talk about the primordial ooze experiment that was sparked by lightning and which "proved" evolution, this is what they are talking about. This is also known as molecules-to-man evolution, or as skeptics call it, "from-the-goo-to-the-zoo-t​o-you" evolution. The problem is that the experiment was cooked from the beginning, by being recreated in an oxygen free environment, as oxygen is widely known to be detrimental to chemical evolution. Scientists now know today that the early atmosphere on earth had far more oxygen than even previously believed. The result of this experiment? Equal parts right-handed and left-handed organic molecules were consistently produced. This is a toxic mixture which cannot produce life.

Creation Museum
Posted by Christine Pack at 12:25 AM