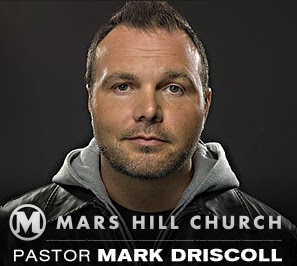 In order to understand what went wrong at Mars Hill, we highly recommend that you first read this article by former Mars Hill elder Paul Petry. According to Petry (and other witnesses in the form of former Mars Hill elders who have also since come forward), there was a dramatic change in the climate of Mars Hill in late 2007, when new bylaws were instituted under which Mark Driscoll was not accountable to anyone who disagreed with him. (Here is a copy of the 2007 bylaws)

Mars Hill Elders Were Going to Discipline Mark Driscoll (listen beginning at the 37 min mark)
Mars Hill Church Board of Elders: Mark Driscoll Resigned Instead of Entering a Restoration Plan

Gateway Pastor Robert Morris Welcomes Mark Driscoll Onto the Stage One Week After Driscoll's Resignation, Even Though Driscoll Has Fled the Discipline Process at Mars Hill and Still Has Not Repented And Sought Forgiveness From Those He Abused (audio of Mars Hill pastor A.J. Hamilton speaking at 10-19-14 church service, listen beginning at the 37 min mark)

Driscoll Has Resigned - What Next?
Mars Hill Church To Dissolve

Lessons From Mars Hill - An Interview With Warren Throckmorton

What John Piper Said When He Finally Addressed the Issue of Mark Driscoll......What We Wish He Had Said Instead
John Piper and Mark Driscoll: Lessons Not Learned? (Pyromaniacs)

Pastor Driscoll's abusive nature toward the flock in his care

The Out Of Control Bus That Runs Over Sheep (Sarah Leslie, Herescope)

Mark Driscoll Proud of the Dead Bodies Behind the Mars Hill Bus?

Mark Driscoll: "Shut Up and Do What You're Told."

"Break their nose"
A Former Mars Hill Pastor Speaks Out and Why Others Are Afraid: The Mars Hill Church Non-Disclosure Agreement

Mark Driscoll Joking About His Anger

The Mars Hill Orange County Discrimination Narrative: The Rest of the Story?

According to multiple witnesses, Mark Driscoll refers to himself as "The Brand" (Seattle Times)

The Reckoning of Mars Hill

Former Mars Hill Pastor Bent Meyer: On His Silence and His Views on Suffering

The Seeds of Trouble: Mars Hill Church, Mark Driscoll and the 2007 Purge

A Former Mars Hill Pastor Speaks Out and Why Others Are Afraid: The Mars Hill Church Non-Disclosure Agreement

How To Revise History the Mark Driscoll Way

[NOTE: All patheos articles about Mars Hill/Mark Driscoll can be found here]


Driscoll's lies and slander toward a Christian brother, and shameless publicity stunt

Mark Driscoll speaking to demons: "I want to know who all is involved here and what we're dealing with."

Mark Driscoll: “A lot of the people we were dealing with in this season remain anonymous, and so we don’t know how to reconcile or how to work things out with people because we’re not entirely sure who they are.”

New Group To Mark Driscoll and Mars Hill Church: We Are Not Anonymous

Dear Pastor Mark and Mars Hill: We Are Not Anonymous (Facebook group)

James MacDonald Resigns From Mars Hill Board; Paul David Tripp Resigns But Continues To Work With Mars Hills As Consultant

Why Mark Driscoll Might Go Down and Why He Should......

Mark Driscoll: I Made The Mistake Of Trying To Be Under the Authority Of My Elders

Mark Driscoll: It was a mistake to submit to these young, new and green elders

Will John Piper Publicly Address The Mark Driscoll Virus That He Unleashed Into the Church by Keynoting Mark Driscoll at the 2006 Desiring God Conference?

An Open Letter To Mark Driscoll (made after Driscoll's public statement, which can be read and watched here)

Mark Driscoll: A Brash Style That Filled Pews, Until Followers Had Their Fill (New York Times)

After $2 Million Raised For Mars Hill Event, ‘Jesus Festival’ Disappears Without a Trace or Explanation

Mars Hill Church in May and June of 2012: Systemic Deficits and a Million-Dollar Home Purchased in Snonohomish County

The Evangelical Celebrity Machine: Janet Mefferd accused pastor Mark Driscoll of plagiarism then deleted all her proof. Why’d she back down?
More on the Silencing of Janet Mefferd, the Shamefulness of Tyndale Publishers, and How Mark Driscoll the Plagiarist is Getting Away With It

This Was No Boating Accident

Of Mefferd and Driscoll and Integrity

On Plagiarism, Tone and Tribalism

Evidence of Plagiarism or Swatting at a Hornets Nest

New Twist In Mark Driscoll Plagiarism Scandal: 'You May Not Go Up Against The Machine'

The Best Dumbest Excuses Made by Plagiarists

Driscoll's vulgarity and pornographic mindset
***Please note that the links below contain strong, explicit sexual content. My desire is not to cause anyone to stumble, so please prayerfully bear this in mind. The links are here for documentation purposes ***

Dreamweaver: The Visions of Mark Driscoll 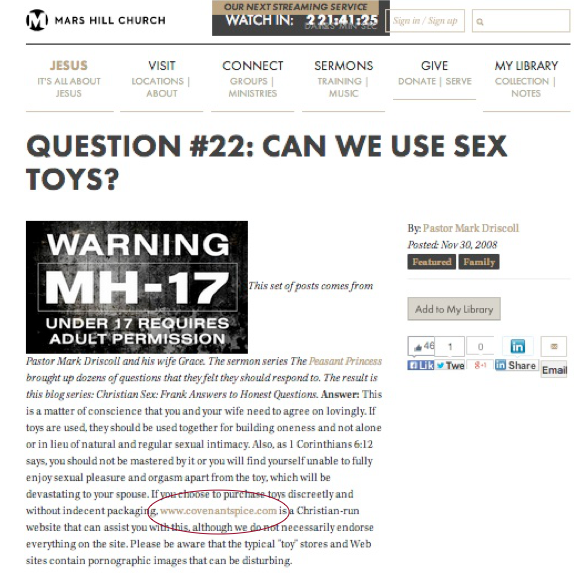 ***Please note that the links below contain strong, explicit sexual content. My desire is not to cause anyone to stumble, so please prayerfully bear this in mind. The links are here for documentation purposes ***

(NOTE: These links were active as of 2:00 PM EST on 8/12/14, but appear to have been recently removed. Attached is a screenshot of the Mars Hill Q and A about the use of sex toys as it appeared before being removed.)

Posted by Christine Pack at 2:00 PM