Tim Keller and the Problems with Ignatius of Loyola


"The best things that have been written, almost, are by Catholics during the counter Reformation: Ignatius of Loyola, St. Francis de Sales, John of the Cross, St. Theresa of Ávila.....great stuff." (Tim Keller)

In a recent post, we documented that Tim Keller, a Presbyterian-PCA pastor and a leader of The Gospel Coalition, had given a talk in which he pointed his followers to the teachings of Ignatius of Loyola. In this post, we will be documenting more specifically the problems with Ignatius of Loyola. Our position is that, in today's church, the sad fact is that many Christians are not very discerning about what is biblical or not biblical, what is true and not true, and will often default to simply trusting their pastors to give them sound teaching and good book recommendations. Christian brothers and sisters, we should respect our Bible-teaching pastors, but at the same time, we are not off the hook for being discerning about any and every teaching that is recommended to us.


But even if we or an angel from heaven should preach to you a gospel contrary to the one we preached to you, let him be accursed. (Galatians 1:8)

"To praise confession to a priest"

Our Response: The Bible tells us to "call no man your father on earth, for you have one Father, and he is in heaven. Matthew 23:9; and to "confess your sins one to another" (James 5:16)
5th Rule

"To praise vows of Religion, of obedience, of poverty, of chastity and of other perfections of supererogation."

Our Response: Supererogation means "a class of actions that go 'beyond the call of duty.' "  These kinds of actions are encouraged by the Roman Catholic Church for the purpose of promoting a (false) sense of righteousness and piety. As Christians, we know that our righteousness comes from Christ alone, and through any works of our own. ("Nothing in my hands I bring, simply to the Cross I cling.")  (1 Corinthians 1:30)

"To praise relics of the Saints, giving veneration to them and praying to the Saints."

Our Response: This practice is absolutely nowhere in the Bible. In fact, we regard this to be a Satanic device designed to get our eyes off of Christ and his finished work on the Cross. It it is only through the blood of Christ that we are able to pray to God.  Jesus alone is our mediator....not dead men and women have lived in ages past. We pray to God alone, and only God hears our prayers, and only He has the power to respond to our prayers. (Hebrews 4:14-16)

"To praise the ornaments and the buildings of churches; likewise images, and to venerate them according to what they represent."

Our Response: Same as for Rule 6.

"To be right in everything, we ought always to hold that the white which I see, is black, if the Hierarchical Church so decides it, believing that between Christ our Lord, the Bridegroom, and the Church, His Bride, there is the same Spirit which governs and directs us for the salvation of our souls. Because by the same Spirit and our Lord Who gave the ten Commandments, our holy Mother the Church is directed and governed."

Our Response: According to Ignatius, the teachings of the Roman Catholic Church are "more right" than Jesus/Scripture. But the Bible tells us that "In the beginning was the Word (Jesus), and the Word was with God, and the Word was God." (John 1:1) And the way that we know truth and Jesus himself is through the study of Scripture. We don't need a church to interpret God's word for us.

Our Final Thoughts: All Bible-believing Protestants should praise God for providentially orchestrating the Reformation and the printing press so that the God-breathed, inerrant Word of God could be known all over the world. God provided faithful men during the Reformation who reclaimed the faith from Roman Catholicism for us, and then God oversaw the development of the printing press so that all the world could read the Bible for themselves. What an amazing God! And yet, many pastors today are turning away from the blood-bought truths reclaimed during the Reformation for the heresies and man-made snares of Roman Catholicism. It's almost inconceivable that such a thing could even happen, and yet......

On The "Faith" of Mother Teresa: John Ortberg Strikes Out (Sola Sisters)

The Myth of Mother Teresa (Challies) 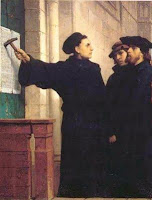