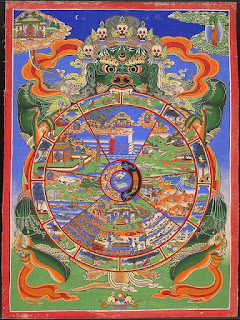 I had an abortion when I was 20 years old. I was not a Christian at the time. By this age, I had completely discarded any teachings I had learned having grown up in church, and to my mind, Christianity was for the weak, for those who needed a crutch, an opiate for the masses. Let the simple people have their silly little superstitions to keep them warm at night, I didn't need it. But after the abortion, my life took a curious turn: I spent the next 15 years looking for salvation. Oh, I would have never admitted to any such thing. Quite honestly, I didn't even have a framework for such a concept. But when I look back on my life, that's exactly what I was doing. Something inside of me (my conscience?) knew that I needed atonement, and I unconsciously set about looking for it.

I began to restlessly move through belief system after belief system, searching for redemption. As long as there was no sovereign holy God to whom I was accountable, any religion was fine for me to try: hinduism, buddhism, kabbalah, paganism, mysticism, occultism, shamanism, wicca, humanism - whatever. The problem was that within each system, guess what? There was no redemption. I would read all the books and do all the practices I learned to do -- meditation, fasting, yoga, reiki, hypnotherapy, crystals, astrology, numerology, visualization, tarot cards -- but when I would get to the end, I would always think: that's it? There was no "there" there.....

At the end of all my searching, I had ended up with a vague sort of belief system that all paths led to God, that there was no way to know him personally, that he/it was probably some kind of impersonal force out there. I leaned toward Buddhism and the law of cause and effect (karma), but what I really thought was that there was no way for anyone to know for sure.

By age 35, I was married to a wonderful man and was a new mother to a precious baby boy. But my life had taken another strange turn. For some reason, I had become consumed with fears that something horrible was going to happen to my loved ones. My fears would paralyze me, they would wake me up at night, they would leave me in a cold sweat, my heart pounding, thinking horrible thoughts that I couldn't stop thinking. I had no control over my thoughts, I only managed to sort of co-exist with them.....but I could bleakly see that these fears had only worsened as time passed. My outer life looked great (sweet husband, precious baby). But my inner life was a shambles.

When 9/11 happened, my husband, who was an agnostic, and I began to attend a local church. We were really rocked by this catastrophic event. We began to think more soberly about the weighty questions that everyone has: Is there a God? Can we know Him? If He does exist, what does He require of us? We had both grown up attending church, but had thrown it off as foolishness when we became adults. Now, we were taking a new look. Between the 2 of us, we had covered most of the other world religions! Time to examine again the claims of Christianity.

I was saved when our pastor preached through the Ten Commandments. The Ten Commandments? Isn't that sort of old-fashioned and kind of legalistic? Well, our pastor didn't teach the Ten Commandments as a way to live so we could get better and better, and hopefully someday be "right with God." What he did was pull back the veil of the Holy of Holies and show me a picture of who God was. He was a God so blindingly holy that one transgression of these Commandments was enough to doom me. This was no prescription for getting right with God: this was a one-way ticket to hell! One lie, a death sentence. One covetous thought, a death sentence. One single act of rebellion against my parents, a death sentence. I sat still as he spoke, desperately trying to think of all the "good things" I had done in my life that might get me a pass. Finally, our pastor came to the 6th commandment, "Thou shalt not kill," and I was undone.

In an instant, I realized how my inner need for atonement had driven me relentlessly to pursue redemption in some way through the many religions I had tried. And I realized the futility of any way other than the one God had prescribed. Jesus' words that I had learned in my childhood went through my head: "I am the Way, the Truth, and the Life. No-one comes to the Father but through Me." Suddenly, the realization washed over me that my fears were actually the by-product of the karmic belief system I had come to embrace! This impersonal system of cause-and-effect demanded payment for what I had done. And my fears were my own inner struggle with attempting to reconcile my unforgivable crime - the abortion - with the cool, impersonal laws of karma that I felt pressing down on me: I killed; therefore, there must be a corresponding death. Would it be mine? My husband's? My baby's? That's the law of karma. Those were the fears that enslaved me. I realized I didn't want justice; I wanted, I needed mercy.

Suddenly, the gospel message, the very heart of Christianity, made glorious sense to me. God sent Jesus to make atonement for me because I couldn't make atonement for myself. Jesus suffered on the cross so that I would not have to pay the penalty for my sin. There truly was no other way! I was dumbfounded as the simplicity of God's plan broke over me in a fresh way. Scripture came flooding into my mind, suddenly making sense. God had used my sinful, murderous, selfish act to drive me to my knees and save me. And yet, He did save me, even me, a wretched, depraved sinner. What an amazing God.

In a sense, Buddhism got it right with the idea that there was a ledger being kept somewhere, recording rights and wrongs, and also the idea that wrongs had to be corrected. But only Christianity makes a way for sinners to be made right with God without being punished themselves. Someone did pay the price for my sin...only, it wasn't me. In the face of such infinite mercy, who would want something as small as karma?

Universalism: The Gospel Message of Emergent and New Age Spirituality
Posted by Christine Pack at 3:58 PM