Who Says The "Begats" Are Boring?

It has been said that all of the Old Testament is an arrow pointing to Christ.  It is a grand account, filled with instantly recognizable characters: Adam and Eve, Noah, Abraham, Moses, David, Jonah. It is an account of a chosen people, and the beginning of the unfolding of God's plan of salvation.  There are amazing miracles and epic stories of kings and nations.  There are amazing displays of God's might and power: the devastation of the plagues, the parting of the Red Sea, water from rocks, a talking donkey. And yet, you can almost feel the excitement as the Old Testament comes to a close, and we find ourselves at the beginning of the New Testament.  There is a fresh wind blowing: Messiah is coming!  We open to the first page of the New Testament, the Gospel According to Matthew, and we find.....a genealogy?!  Bor - ing!!  Or is it?

Genealogies are those looong passages interspersed throughout the Bible that trace the bloodline of Jesus. They're also known as the "begats."  As in, so-and so-begat so-and-so, and he begat so-and-so, and he begat.......  The one at the beginning of Matthew, and running for several paragraphs, covers more than 2,000 years and 40 generations.  These are the passages that people joke about as being boring, even painful to read.  Can't sleep? goes the old joke, just read through a genealogy, that ought to do the trick.  And yet, one of the things that God used to save me was the genealogy lines in the Bible.  It's true. Here's how it happened..... 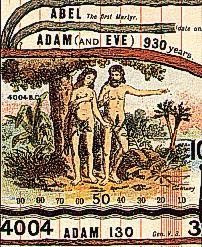 I grew up faithfully attending church with my family.  We loved our church and were involved in many activities: choir, Sunday school, youth group, food drives, retreats, etc., etc. But, it was a very liberal church, and by that I mean, I can't say that I ever heard a clear gospel message in all the years that we attended.  The messages would generally start out with the reading of a Bible verse, but would wind up being a blend of moralism, pop psychology, worldly wisdom and self-help, sometimes with a measure of good old-fashioned American work ethic thrown in.  But no gospel.  And the Bible was sort of viewed as the message given to us by God about how to live Godly lives, with Jesus of course as the primary example.  I remember hearing the story of Adam and Eve as a child in Sunday school, but being told, "Of course, this didn't literally happen since we know that the earth is millions of years old."  Obviously, we were told, God was speaking in metaphorical terms here.  "Adam" as a representative figure of mankind, and "Eve" as a representative figure for womankind.  But there was never a literal "Adam" and a literal "Eve." 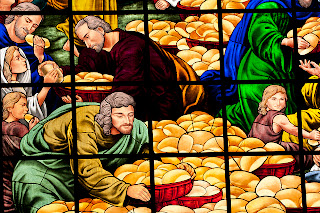 Along with this, we were taught that Jesus didn't really perform all the miracles accredited to him by the gospel accounts.  One class in particular stands out in my mind: a teacher earnestly laboring to help us see that Jesus couldn't have possibly fed 5,000 people with just one small meal.  What really happened, he explained to us, was that Jesus brought the little boy with the five loaves of bread and two fishes before the crowd, and the people, being moved by seeing such generosity of spirit in a child, were shamed into pulling out their own secret stashes and sharing.  I'm convinced that this was how the Jesus-as-a-great-moral-example teaching became so entrenched in liberal circles. In bowing down to the false "god" of science (which put forth, among other things, that the earth was millions of years old and miracles weren't possible), liberal theologians had to find a way to make the miracles of Jesus make sense.  This was how they did it.  But, about those pesky genealogies.....

Flash forward 15 years. I have left the church long ago and wound my way circuitously through many different religions, all of which, ultimately, proved futile.  I'm an agnostic now, and back in church giving this Christianity thing a second look, though with massive amounts of skepticism.  Still, I'm attending faithfully with my husband, taking notes, listening intently.  Our pastor stands up one Sunday and says to us, "For those of you who have never read the Bible, I want to invite you to get a reading guide and start reading through it."  I mentally have a forehead smack moment.  As in, why hadn't I ever read the Bible? After all, I had read the Tao Te Ching, the Sutras and Upanishads, the sayings of , Theosophical writings, etc.  Somewhat sheepishly, I got my reading guide after the service, went to the store the next day and got a study Bible, and started reading.

When I got to one of the bloodlines, okay I admit it, my eyes did roll up in my head at the first reading.  But then I went down to the study notes, which rather matter-of-factly explained that the "begats" were given so that people would know that (1) the Bible was a real book, of real history and real people fixed in time; and was therefore (2) a bloodline that could be traced from Adam and Eve to Jesus.  My brain began to short-circuit.  All those years of allegorized, evolutionized "facts" I had been taught were clashing with this book being presented as historical fact.  I knew I could not reconcile the story of the Garden of Eden with the science I had grown up with.  Where did you squeeze in the millions of years of slow, evolutionary development? Adam and Eve were presented as two real people, the first two people, fully and completely formed. This was a big problem for me, you see, because I was thoroughly postmodern in my thinking.  My generation was probably the first full generation to be raised on the tenets of postmodernism.  Postmodern thought, in a nutshell, is this: your truth is your truth, and my truth is my truth, and even if they are different truths, they can peacefully co-exist. So that's why my brain was short-circuiting; all my postmodern thinking was being challenged by this presentation of Bible history as fact - fact which could not peacefully co-exist with the "science" of millions of years.

So one of these was true and one was not...but which one?  I began to study the bloodline, and realized that it simply wasn't possible to squeeze those millions in.  So what was I going to believe? Well, in his providence, God led me to two things:

(1) Answers in Genesis. AIG is an amazing with many scientists who have gone on record categorically stating that the scientific evidence, rather than proving millions of years, instead is beginning to point more and more to a "young earth" timeline.....as in, a timeline that lines up with about the same amount of time given in the Bible. You can go here to see a very long list of scientists in agreement with the "young earth" timeline.  Bear in mind that these men and women are experts in their field, most of them in some area of specialized scientific study (archaeology, astronomy, physics, biology, chemistry, etc.).  My point is this: you simply cannot look at this long list of scientists and give the standard worldly line: "Well, you must be an uneducated idiot to believe in the young earth theory!"  You can say a lot of things when you look at this list of scientists, but you definitely can't say that.

(2) James Ussher's 'Adams' Chart of History. James Ussher was a 17th century Anglican bishop who painstakingly charted out the bloodline from Adam and Eve to Jesus.  His chart features the Biblical timeline going across the top and the corresponding world history underneath it. It's so amazing to look at it, and see God's hand sovereignly guiding all of human history.  Below the scarlet thread of Jesus's bloodline, you see nations and kings rise and fall, but above it all, God's bloodline marches steadily onward toward the fulfillment of his purposes (Psalm 90).  And what are those purposes?  What exactly is the point of the bloodline? Well, the point is where it ends.  Like in the Old Testament, remember? All of it an arrow pointing to Christ?  This is also what the bloodline does, it puts the spotlight on the one single Person at the end of it:  Jesus, the Messiah.  Jesus, the "who takes away the sins of the world." Jesus, who came and did what no other human being could have ever done: He lived a perfect, sinless life, the life that not one of us could ever live, and he took his perfect life and offered it up as a sacrifice for many. He was crucified and buried, but on the third day after his death, he was raised, proof that his sacrifice was acceptable to God and efficacious for the cleansing of sin.  And anyone who repents and puts their trust in him will be given a new heart and new desires, raised from death to life, born again.  His ultimate reason for coming to this earth was so that He would die. And God put a great big spotlight on that with the begats so that we wouldn't miss the one life - and death - that mattered above all others.

As Americans, we tend to think that we are so mighty, the greatest nation on earth.  Well, when you look at Ussher's timeline, you realize that ALL these kingdoms once had their day in the sun, but where are they now?  Egypt was once the mightiest nation in the world, known for the architectural magnificence of their awe-inspiring pyramids, and for taming the Nile River.  Babylon, known for their acclaimed Hanging Gardens, and brilliant military campaigns led by Nebuchadnezzar.  Rome, their amazing Roman roads and contributions to education and government.  Where are they now?  Some of them are still around, but do they rule the world?  Looking at this chart is truly humbling. It brings the deeper realization of that corny old chestnut: "History is really His - Story"  All of history is "His" story, and it's all about Christ.  All of history is about him.  That's why the Bible so carefully and methodically lays out that bloodline time and time again.  The begats aren't boring - quite the opposite.  They serve the very important purpose of anchoring the Son of God in time and space, a real person, who really lived at a fixed point in history.  The begats take the Bible out of the realm of allegory, and make it something that must be contended with on its own terms.  There is no "filler" in the Bible; all of God's word is holy, inspired, valuable, important (2 Tim 3:16). Even the begats. And for some of us oddballs, especially the begats.

The Dark Side of Darwin (interview with Dr. Jerry Bergman)
Posted by Christine Pack at 9:06 PM