Rick Warren: Did He or Didn't He?

The fallout from Desiring God 2010 continues, and seems to have taken a rather curious turn.  Rick Warren recently "tweeted" the following: 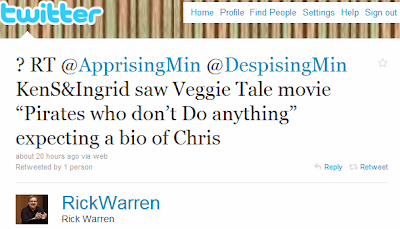 Now, those who know Rick Warren's "law heavy" teaching know that the above tweet is a dig at discernment writers (like Ken Silva, Ingrid Schlueter, and Pirate Christian Radio talk show host Chris Rosebrough) who - according to what Rick Warren is saying in this tweet - don't "do" anything, but focus too much on doctrinal correctness.  And what, according to Rick Warren, is the correct way to "do" things?  Well, in his own words, Rick Warren has said he thinks Christianity needs a “second Reformation” that would steer the church away from divisive politics and be “about deeds, not creeds” (i.e., helping the poor, the sick, the needy).

Now, not being a "tweeter," I don't really understand how Twitter works, but according to those who do, it is apparently just a matter of backtracking in order to understand from whence a "tweet" originated.  And according to some super sleuths who did a little old-fashioned gumshoe investigating, this particular tweet seems to have originated with Rick Warren.  Why is this significant?  Because "RT" on a tweeter's "tweet" is supposed to stand for a "re-tweet," meaning it has originated elsewhere and is simply being reposted at the borrower's own site.

Now, not being able to sleuth this out for myself, I can only imagine two scenarios for what has happened here:

(1) Rick Warren "retweeted" this rather juvenile dig at writers who are attempting to come alongside Rick Warren and exhort him to doctrinal purity, or

(2) Rick Warren actually originated the "tweet" and then deceptively tried to make it look like he was just reposting what someone else had originated.

So here is our take on this whole mess.  IF Rick Warren really did retweet the above tweet, it's just plain wrong because it's childish and immature.  After all, he is a pastor of one of the world's largest churches, and is in a position of authority and leadership.  People look to him for wisdom and guidance.

On the other hand, if Rick Warren actually originated this "tweet" - and then lied about originating it - that's taking this mess to a whole 'nother level of wrong.  Where in the Bible is there an example of it being okay for church leaders to do such a thing? 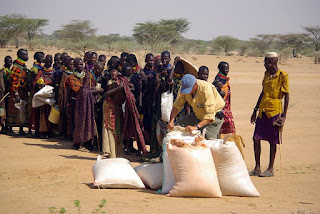 Let me put it this way: if we align ourselves with care organizations that bring aid, but not the salvific message of Jesus' atoning death made on behalf of those who will repent and believe, what happens when these people, who have been made physically comfortable in their poverty or suffering, come to the end of their lives and are face-to-face with a holy God on the Day of Judgment?  Will we have given them something of eternal value that they can take with them into eternity?  Or have we merely filled their stomachs and made them comfortable on their way to hell?

Rick Warren Doesn't Get A "Pass"