"Sincerity" the Most Important Thing? 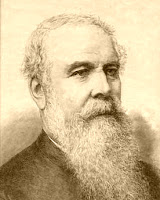 "The plain truth is, that “sincerity and earnestness” are becoming the idol of many Christians in these latter days. People seem to think it matters little what opinions a man holds in religion, so long as he is “earnest and sincere”, and you are thought uncharitable if you doubt his soundness in the faith! Against this idolatry of mere “earnestness” I enter my solemn protest. I charge every reader to remember that God’s written Word is the only rule of faith, and to believe nothing to be true and soul-saving in religion which cannot be proved by plain texts of Scripture. I entreat him to read the Bible and make it his only test of truth and error, right and wrong." - J.C. Ryle

J.C. Ryle wrote this almost a hundred years ago, but this is every bit as true now as it was in Ryle's day.  "Sincerity," especially, seems to be the chief measuring stick that today's postmoderns go by:

.....with the "it" merely being incidental and the "you" being of primary importance, when in fact the 'it' of Christianity is of paramount importance, and the 'you' is of very little importance.  (The 'it' of the Postmodern Manifesto, of course, refers to one's set of beliefs, one's doctrine, as it were.)

We all have friends who have succumbed to this newfangled way of Postmodern thinking.  They nod sagely, and they pat your hand when you attempt to speak truth to them, and they rush to assure you that you need not worry for them....after all, what they have 'works' for them.

But doesn't truth matter?  One of my favorite Christian pastors of today says that often he will go to a college auditorium and stand up at the podium and boldly proclaim:

And when he does this, he says that he will most likely receive a standing ovation.  Cheers and hollering and fist pumping all around.  But, when he follows up this statement with this proclamation:


"I have found Truth.  I know exactly what Truth is!"

Why is this?  Why is the pursuit of truth thought to be such a high and noble calling, and yet the proclamation of one's having found Truth deemed to be insufferably arrogant?

As Christians, we know that Truth is not a what...it is a Who.  It is Jesus Christ, who said:

Truth isn't just what feels good, or what seems to work (pragmatism).  And yet many of today's church leaders seem to go by the maxim that if their church is growing, then "God must be in it."  But growth is not the sole measure of a church's spiritual health.  After all, today there are many, many examples of churches that are growing by leaps and bounds, but which routinely offer up self-help messages designed to tickle the ears of the hearers, messages about abundant living, good health, how to parent, be a good spouse, manage one's finances, etc., rather than sound biblical teaching.

But isn't it doctrine, in fact, that teaches man how he can be reconciled to a high and holy God?  Shouldn't this be the main job of the church?  Teaching about the essential doctrines of the faith and calling for repentance of sin and faith in Christ's atoning death?  After all, this was how Jesus and the apostles taught.

Think of it this way: wiccans, pagans, Muslims, Hindus and Buddhists are all very sincere in their beliefs. It's just that they are all sincerely deceived.  They all have doctrine....it's just that it's wrong doctrine.  And please understand this: the depth of their sincerity will be no safeguard whatsoever against the fires of hell awaiting them on the Day of Judgment.  Does this not give us all pause?

Just for the record, below are the essential doctrines of the Christian faith.  So essential to the faith are these truths, that lack of belief in even one of these doctrines is considered to be heresy.  I'm putting these doctrines forth because I keep having conversations with people who have no idea whatsoever that there are even essential beliefs a Christian must hold to in order to be considered orthodox.  (The result, of course, of an entire church generation having been primarily fed with ear-tickling, self-help messages.)  So here they are:

The Five Essential Beliefs of the Christian Faith

1. The Deity of our Lord Jesus Christ.

5. The Inerrancy of the Scriptures.

Not many words are used in comprising the above list of the essential beliefs of the Christian faith, but many challenging concepts are contained therein, are they not?  In fact, all true, born-again believers have had to wrestle through the hard truths contained in these 21 words, not to mention their implications.  If you have never seen this list before, I invite you to dwell on it and its truths, and make sure that you are in wholehearted agreement with them.  And if you are not, then, by all means, let the wrestling begin.  Your eternity depends upon it.
Posted by Christine Pack at 1:08 PM