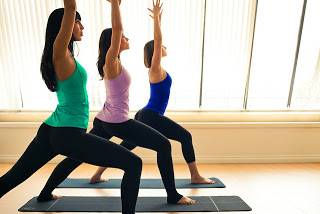 Because we have written with such frequency about the spiritual hazards of yoga, many of our regular readers might be tempted to look at the title of this article and think that we will again be discussing the spiritual dangers of yoga. Not so. Today we want to point you to an article in the New York Times (How Yoga Can Wreck Your Body) which enumerates the potential physical dangers of yoga. You didn't know yoga could be dangerous? Please read on from the article:


"A healthy woman of 28 suffered a stroke while doing a yoga position known as the wheel or upward bow, in which the practitioner lies on her back, then lifts her body into a semicircular arc, balancing on hands and feet. An intermediate stage often involves raising the trunk and resting the crown of the head on the floor. While balanced on her head, her neck bent far backward, the woman 'suddenly felt a severe throbbing headache.' She had difficulty getting up, and when helped into a standing position, was unable to walk without assistance. The woman was rushed to the hospital."

"(A) 25-year-old man was rushed to Northwestern Memorial Hospital, in Chicago, complaining of blurred vision, difficulty swallowing and controlling the left side of his body. Steven H. Hanus, a medical student at the time, became interested in the case and worked with the chairman of the neurology department to determine the cause (he later published the results with several colleagues). The patient had been in excellent health, practicing yoga every morning for a year and a half. His routine included spinal twists in which he rotated his head far to the left and far to the right. Then he would do a shoulder stand with his neck 'maximally flexed against the bare floor,' just as Iyengar had instructed, remaining in the inversion for about five minutes. A series of bruises ran down the man’s lower neck, which, the team wrote in The Archives of Neurology, 'resulted from repeated contact with the hard floor surface on which he did yoga exercises.' These were a sign of neck trauma. Diagnostic tests revealed blockages of the left vertebral artery between the c2 and c3 vertebrae; the blood vessel there had suffered 'total or nearly complete occlusion' — in other words, no blood could get through to the brain."

"The first reports of yoga injuries appeared decades ago, published in some of the world’s most respected journals — among them, Neurology, The British Medical Journal and The Journal of the American Medical Association. The problems ranged from relatively mild injuries to permanent disabilities. In one case, a male college student, after more than a year of doing yoga, decided to intensify his practice. He would sit upright on his heels in a kneeling position known as vajrasana for hours a day, chanting for world peace. Soon he was experiencing difficulty walking, running and climbing stairs. Doctors traced the problem to an unresponsive nerve, a peripheral branch of the sciatic, which runs from the lower spine through the buttocks and down the legs. Sitting in vajrasana deprived the branch that runs below the knee of oxygen, deadening the nerve. Once the student gave up the pose, he improved rapidly. Clinicians recorded a number of similar cases and the condition even got its own name: 'yoga foot drop.'"

The article can be read in its entirety here. (Please note that this article does not address the underlying religious roots of Yoga; it only addresses the potential harm it can cause to your body.)

Karma Just Doesn't Cut It
Posted by Christine Pack at 11:30 AM