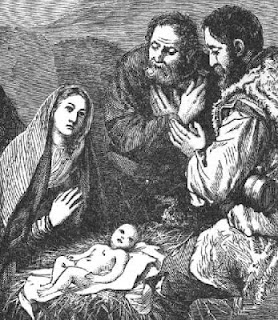 Have you ever stopped to ponder why it is that, when the world attempts to portray what it would look like for the supernatural world to intersect with the natural world, the things they come up with are most often frightening and perverted in some way? Many examples of this come to mind: werewolves, vampires, Frankenstein, zombies, aliens, mummies, and so on. The human mind seems predisposed to think of the supernatural in a way that is scary, frightening, and most often a horrific perversion of what is normal and natural. From a Christian perspective, though, doesn't it make sense that the natural, unregenerated mind - in its sin-darkened state - can only conjure up a darker, more frightening version of what it "knows" (humans and human-ess) when attempting to make sense of the world? After all, the Bible tells us that man is darkened in his understanding, his wisdom is foolishness.

The truth is that, without benefit of the special revelation of God's Word, the Bible, the human view of that which is supernatural seems to default to the freakish and the frightening.

But what does it really look like for God to enter into time and space, and intersect with the natural world by taking on flesh and dwelling among us?

Scripture tells us the story rather simply:


“God sent the angel Gabriel to Nazareth, a town in Galilee,  to a virgin pledged to be married to a man named Joseph, a descendant of David. The virgin’s name was Mary.  The angel went to her and said, “Greetings, you who are highly favored! The Lord is with you.”

Mary was greatly troubled at his words and wondered what kind of greeting this might be.  But the angel said to her, “Do not be afraid, Mary; you have found favor with God.  You will conceive and give birth to a son, and you are to call him Jesus.  He will be great and will be called the Son of the Most High. The Lord God will give him the throne of his father David,  and he will reign over Jacob’s descendants forever; his kingdom will never end.”

“How will this be,” Mary asked the angel, “since I am a virgin?”

The angel answered, “The Holy Spirit will come on you, and the power of the Most High will overshadow you. So the holy one to be born will be called the Son of God.  Even Elizabeth your relative is going to have a child in her old age, and she who was said to be unable to conceive is in her sixth month. For no word from God will ever fail.”

“I am the Lord’s servant,” Mary answered. “May your word to me be fulfilled.” Then the angel left her.”

God, our omniscient, omnipotent, sovereign Creator, chose to enter into our world as.....what? As a magnificent archangel, so that everyone would know how glorious He was? No. Well, then, perhaps as a mighty king, as a sort of preview of Christ's eternal kingdom to come? No. God's own Son, God in flesh, entered into our world as a baby. A tiny baby, born to a poor carpenter and his betrothed, tucked away in a small town that was considered insignificant.

Let's first consider the fact that Jesus was even able to be born, live among us, and interact with throngs of people during his ministry in a way that wasn't, well, frightening. Think about it. Of all the supernatural beings ever imagined or conjured up in the imagination of man, Jesus was the most supernatural of all supernatural beings ever to walk among us. How was it possible that he even could walk among us without people falling to the ground in abject terror over his glory? How could people be in his presence without being consumed?  How could a mere mortal - Mary - carry him in her body?

There are glimpses of his glory and magnificence throughout the gospels: most notably, his miracles, Peter recognizing his Lordship and falling at his feet on the fishing boat, his transfiguration, his power over nature, his resurrection.

Among other things, I was a practicing Hindu before God saved me.  I actually ventured into a number of different religions and religious practices before being saved, but Hinduism seemed to make the most sense to me.  And even though I had very profound mystical experiences as a Hindu, I can't say that the God I wanted so desperately to reach and connect with ever felt near.  For me as a Hindu, "God" was remote, inaccessible, impersonal.  The idea of God "coming near" was too much for my mind to grasp.

What great love, then, had God the Father that He would make a way for Jesus to dwell among us.  And not only did Jesus, the most supernatural being ever to step foot on this earth, dwell among us, but He wasn't frightening. He wasn't grotesque or strange or freaky or odd, and His face didn't throw off beams of light (contrary to what the carol "Silent Night" claims).  In Jesus, God came near in an immensely personal way.  He was born as a baby, who grew to be a man. He entered into the mire of our human existence by becoming one of us, fully experiencing life as a human, suffering pain and sadness and temptation just as we do.

But why?  Why did God come near?

The elegant book of Hebrews unfolds much of this mystery for us, explaining that Jesus was tempted and yet never sinned:


"For we do not have a high priest who is unable to empathize with our weaknesses, but we have one who has been tempted in every way, just as we are—yet he did not sin." (Hebrews 4:15)

Again, why?  Why was it important for God to record in his Word that Jesus was tempted, yet did not sin?  It is because of this:

If Jesus came to earth and was not fully man, he would never have been able to make atonement for us.  The first man - Adam - acted on behalf of all mankind when he first sinned, way back in the Garden of Eden.  Thus, we inherited his - Adam's - sinful, fallen nature, which means that we are born into sin and we choose to sin.  And because of our sin, we are doomed:


"For the wages of sin is death; but the gift of God is eternal life through Jesus Christ our Lord." (Romans 6:23)

But Jesus came as the "second Adam" to represent all mankind in the way that the first Adam failed to.  He lived a perfect, sinless life, never sinning in thought, word or deed.   And then He willingly offered his life as an atoning payment for all who would repent and place their faith in his perfect sacrifice made on their behalf:

What greater love is there in all the world than this?  A sovereign creator God, who made us and has a righteous claim over our lives....and yet is intensely personal, and desires that all might come to repentance:


"The Lord is patient toward you, not wishing for any to perish but for all to come to repentance." (2 Peter 3:9)

What great, good news this is!  This is the message of Jesus and Christmas and the Nativity and the Cross.  God came near.  God made a way for sinful, wretched men to be reconciled to a high and holy God.

For all those who are struggling with deep and difficult ideas of man and God and truth and eternity, and who have not yet bent the knee in humble submission to an infinitely holy - and yet merciful - God who has made a way for sinful men to be forgiven, may today truly be the day of salvation for you:

God Came Near
Posted by Christine Pack at 12:00 AM