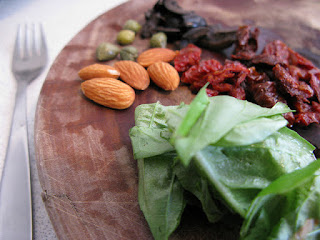 When it comes to food, does "natural" automatically equal "better?" If this is your thinking, I have some food for thought for you. While I do agree that eating food that is less processed is probably more healthy than eating food that is highly processed, we also should remember that Jesus himself declared ALL foods clean:

“Nothing outside a man can make him ‘unclean’ by going into him. Rather, it is what comes out of a man that makes him ‘unclean.’” After he had left the crowd and entered the house, his disciples asked him about this parable. “Are you so dull?” he asked. “Don’t you see that nothing that enters a man from the outside can make him ‘unclean’? For it doesn’t go into his heart but into his stomach, and then out of his body.” (In saying this, Jesus declared all foods “clean.") (Mark 7:15-19, my emphasis)

Another thought: When Adam and Eve sinned and brought about the Fall, ALL of the world was cursed, including the plants.


"To Adam, God said, 'Because you listened to your wife and ate fruit from the tree about which I commanded you, You must not eat from it, Cursed is the ground because of you; through painful toil you will eat food from it all the days of your life." (Gen 3:17)

"We know that the whole creation has been groaning as in the pains of childbirth right up to the present time." (Rom 8:22)

So going back to nature and revering natural, plant-based food, treatments, etc. as automatically better, or somehow more pure, is faulty thinking. The plants were also subject to the curse.

Some more verses to consider:


"The Spirit clearly says that in later times some will abandon the faith and follow deceiving spirits and things taught by demons. Such teachings come through hypocritical liars, whose consciences have been seared as with a hot iron. They forbid people to marry and order them to abstain from certain foods, which God created to be received with thanksgiving by those who believe and who know the truth. For everything God created is good, and nothing is to be rejected if it is received with thanksgiving, because it is consecrated by the word of God and prayer. If you point these things out to the brothers, you will be a good minister of Christ Jesus, brought up in the truths of the faith and of the good teaching that you have followed." (1 Tim 4:1-6, my emphasis)

Obviously, we need to follow biblical principles when it comes to food, and in this area, God's word is not completely silent on the matter: we ought not be gluttonous, we mustn't make food an idol, and we should give thanks for what the Lord has provided. But what I am finding today is that many Christians I run into have the most incredibly strong opinions when it comes to food, often to the point of attaching spiritual significance to their food choices. Now, perhaps I'm ultra-attuned to picking up on this, having once been enslaved myself to legalistic ideas about food that involved, yes, attaching spiritual significance to my food choices. You see, as a New Ager, I had been a militant vegetarian, who only ever ate anything organic, whole grain, and minimally processed. At the time, I don't think I would have said that I viewed my choices as being morally superior to other people's choices, but looking back, it's absolutely clear to me that I did. And then, even as a new Christian, I still held on to some of my (militant) ideas about food, and for a brief season in my early Christian walk accepted the Hebrew Roots teaching about following the Leviticus food laws. I am somewhat embarrassed to admit this, but I was one of those who would chastise, brow-beat and question the intelligence and diligence of anyone who didn't have some arduous Food Plan for themselves and for their families.  However, as God began to sanctify me over time, He also was really working in my heart about my food legalism. But it has taken me 10 years to get to the place I am now. Ten years.

Please hear what I'm saying: I am not saying that anyone else is in bondage to food legalism, or that anyone who desires to make healthier food choices is automatically a legalist. What I am doing is sounding the alarm that Christians ought to be on guard against unwittingly taking on worldly concepts about their food choices. I'm saying this because the New Age teaching I was under has gone from being something that only a very small minority of people in this country believed and acted upon to becoming pretty much mainstreamed. This subtle New Age teaching is everywhere in the culture now, and the teaching is this: your food choices have a moral component to them. But this is simply not true, and I think I've biblically made my case about this.


"But the Spirit explicitly says that in later times some will fall away from the faith, paying attention to deceitful spirits and doctrines of demons, by means of the hypocrisy of liars seared in their own conscience as with a branding iron, men who forbid marriage and advocate abstaining from foods which God has created to be gratefully shared in by those who believe and know the truth. For everything created by God is good, and nothing is to be rejected if it is received with gratitude; for it is sanctified by means of the word of God and prayer." (1 Tim 4:1-5)

Please also understand, again, that I am not saying we shouldn't be wise about our food choices, but at the same time, we can take this too far, until it almost becomes an obsession with some. The problem I see is when Christians begin to equate eating processed food with being sinful, OR the inverse: they sometimes seem to equate eating unprocessed food as being somehow more righteous or more virtuous, as if there were some moral/spiritual component to our decisions about food. Having said all that, my personal preference is still to eat a minimally processed diet, lots of fruits and veggies, etc. In fact, I have been teased by some friends that I must be part Amish, because I grind my own wheat for making bread (yes, I really do). But at the same time, I want to be balanced in my thinking, and be able to be like Paul, content in any and every circumstance. What this means for me is that I desire, by God's grace, to be content whether I am eating as I prefer, that is to say, food that is fresh and minimally processed, or, whether I'm eating a Chick-Fil-A sandwich and waffle fries on the fly.


"Not that I am speaking of being in need, for I have learned in whatever situation I am to be content. I know how to be brought low, and I know how to abound. In any and every circumstance, I have learned the secret of facing plenty and hunger, abundance and need. I can do all things through him who strengthens me." (Philippians 4:11-13)

And one last thing: I would also add that it seems that people (even Christians) who go overboard with all of this stuff seem to forget that we all will die one day. We are so easily distracted from eternal things......looking for perfect health and/or long, physical life. Perhaps we should remember that our lives are but a vapor (James 4:14) and focus more on our glorified bodies that only union with Christ will bring (Philippians 3:20-21), though I am somewhat leery of even posting this comment, over concern that fellow Christians will say I am advocating mistreating our bodies, which I most assuredly am not. Fellow Christians, I am simply exhorting that we not make food - mere food - more important than it is. Let's not make food an idol.

(Please note that the post above was made by a former health food idolator and "natural" junkie. Please bear this in mind before the knives come out.....this is not an issue I've thought through carelessly or lightly. In fact, this article has been brewing in my brain for many months now. I have been researching, discussing, thinking about, and basically living out my ideas about food for more than 30 years now, beginning when I was 14 years old and used my own money to begin buying Health magazine. I know that food is a highly charged topic in the time we live in, and with that in mind, may we all endeavor, by God's grace, to always be submitting all of our ideas to the authority of God's Word.)

Does the Root Word of "Pharmaceutical" (Pharmakeia/φαρμακεία) Mean That Pharmaceutical Drugs Are Rooted In the Occult/Sorcery? (Sola Sisters)

Are We All Syncretists Now? A Conversation About Evangelical Christianity and Alternative Medicine with Historian Candy Gunther Brown (Dr. Al Mohler)
The Debate About GMO Safety is Over (Forbes Magazine)

The Whole Foods Movement and the Developing World

True Spirituality, Health and Science: Where Do We Draw The Lines? (Marcia Montenegro)


What's New With the New Age? Why Christians Need To Remain On Guard Against the New Age Spirituality (Phil Johnson, GTY)

How Neo-Paganism Deceives The World and the Church (Bob DeWaay, CIC)

The Value and Importance of Scientific Studies

The Biblical Worldview Is The Foundation of Modern Science

The Scientific Method and Why It Matters

A Warning To Christians About Homeopathy (Sola Sisters)


The Unregulated Nature of the Alternative Treatment Industry: Does the Label On The Outside Tell The Truth About What's Inside? (Sola Sisters)

Herbal Supplements May Not Mix With Heart Medicines (Mayo Clinic)

How To Use Essential Oils: A Step-By-Step Guide (satire, warning: some mild language)

Can Aromatherapy Oils Poison You? How Tiny Particles 'May Damage Liver and Kidneys' (Daily Mail, UK)

Hidden Dangers of Essential Oils: The Frightening Truth About Natural Remedies Such as Olbas Oil Which Can Cause Heart Problems, Convulsions and Eye Ulcers (Daily Mail, UK)