UPDATE: As of Tuesday, January 10, 2012, the Desiring God article in which the Roman Catholic mystical practice of Lectio Divina was promoted has been changed. Notes author Jonathan Parnell:


"Formerly I listed Lectio Divina as a third system for prayer. I've since removed it for the confusion it has caused. We do not endorse contemplative spirituality. The main point I'd like to recommend is using the text of Scripture as an organizer for our prayers — prayers that are exegetically faithful and gospel rich. I'm sorry for introducing the category."

While I appreciate the quick response by Desiring God (due in some part, I'm sure, to the ensuing uproar), John Piper still recommends resources by contemplative mystics on his church website. So yes, the Lectio Divina article teaching mysticism was pulled, but other concerning items that promote mysticism remain. 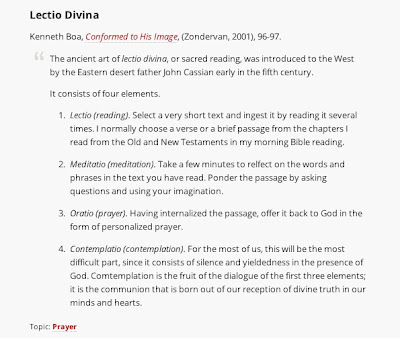 This post should be filed under the category of "Very, Very Sad." 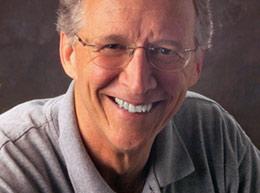 In a recent article by Ken Silva of Apprising, Silva reported that Bible teacher Beth Moore and respected theologian John Piper participated in a sort of "Lectio Divina Lite" prayer at the Passion 2012 Conference going on in Atlanta right now.  But even more than that, Dr. John Piper, pastor of Bethlehem Baptist Church in Minneapolis, is now straight up encouraging the mystical practice of Lectio Divina to his followers on his Desiring God website. A recently published article by Jonathan Parnell at Desiring God, which provides "God centered resources from the Ministry of John Piper," encourages readers to learn Lectio Divina, a mystical practice developed by Roman Catholic monks. Some of what is written in this article is very good, but I have to ask the obvious question here: Should we really be getting any aspect of our theology from monks who cloistered themselves (in direct opposition to what Scripture teaches), and who dabbled in pagan mysticism? Fellow Christians, this is disturbing to me and should be for all of us who claim the name of Christ. Dr. Piper has been a highly esteemed theologian for years, maybe decades. This is yet another exhortation that we are to follow God, and not a man.

The Desiring God article in question points us to author Kenneth Boa, a Thomas Merton quoting mystic. That's right, the very same Thomas Merton who said he wanted “to become as good a Buddhist as I can.”


While it could be hoped that Kenneth Boa means nothing more than deeply contemplating Scripture (as Scripture commands), sadly, he makes it clear in one of his articles that, when discussing the practice "Contemplative Prayer," he is not merely talking about deeply and mindfully contemplating God's Word (as many Christians might think this term means). No, what he is pointing his readers toward is how to enter into an altered state of consciousness not for the purpose of learning mindfully about God, but to instead have some kind of subjective impression or experience of God. This is mysticism.


Nowhere in Scripture are we taught that we have to get really silent and "listen" for God to speak to us, or, wait silently for God to "shape" us in some mystical way. Yes, the Holy Spirit guides us, and yes, there is some mystery about how this happens, but we have to go by Scripture. Jesus taught:

"But you, dear friends, must build each other up in your most holy faith, pray in the power of the Holy Spirit." Jude 1:20

"Pray in the Spirit on all occasions with all kinds of prayers and requests. With this in mind, be alert and always keep on praying for all the saints." Ephesians 6:18 (my emphasis)

We are to pray in the Spirit, staying mindfully alert. This is the Christian practice of prayer, and it stands in direct contrast to the pagan practice of "mystical prayer," which is to empty one's mind and go into an altered state of consciousness, sometimes called an Alpha state. Scripture doesn't teach going into an altered state of consciousness so that we can get some kind of mystical message from God. However, pagans of all stripes DO engage in this mind emptying practice.

First let me start with explaining why a person is unable to learn mindfully about God in an altered state of consciousness: it is because the mind, after following the techniques encouraged by Kenneth Boa (and now the Desiring God's website), is now in a controlled, light hypnotic trance. These techniques enable people to go into a state in which they are neither fully awake, nor fully asleep....they are somewhere in the middle. They are in an Alpha state. But in this state (well known throughout the occult world, incidentally), the mind is parked. It's in neutral. It can only receive information, much like a radio receiver, and is unable to critically process data. And as mentioned above, mystics throughout the ages have always had "culturally personalized" techniques for achieving this state of mindlessness:

All of these mystics - with widely divergent cultural customs and differences - have one thing in common: some kind of technique for shutting down the mind, and something we are never told to do in Scripture ("Be alert!"). My Christian friends, this practice of emptying the mind is dangerous, dangerous teaching, and as a former mystic, I can attest to the fact that, rather than leading one to God, it leads practitioners instead into the demonic realm. Please pray that God would open Dr. Piper's eyes to the dangers of this practice his website is now encouraging.

ADDED NOTE 1/10/2012: My sister made a very good comment in the comment section below about there being a time as a new Christian, for her, when John Piper's teaching actually helped her get free of mysticism (because she came out of the same New Age mysticism that I did). And she's right: there was a time when John Piper did not teach these things. Here was her comment:


"One of the saddest things to me is that John Piper actually helped me come out of my Christian mysticism. When I began realizing that a lot of what is called Christian teaching these days is just pagan practices sprinkled with Christian terminology and some Bible verses, I looked to the the Bible and to good Bible teaches to help me answer two basic questions: How does God communicate with us? And what is prayer? It was some teaching by John Piper specifically on that second question that really helped me. He was very clear: prayer is us talking to God- it is not like a telephone conversation where I talk and then God talks. He said God speaks to us through scripture. I could stop looking for signs and clues and hunches and feelings- I could just read God's Word and know that God was speaking clearly and openly to me. It was so freeing."

And in fact, after Cathy commented, in reflecting back I also remembered how she had labored over this issue with me when I was a new Christian and she was discipling me. She really worked to help me understand this strange new concept of how it is that God communicates with us. It was extremely freeing for me as well, having come out of mysticism, where you're always trying to figure out if the sign/nudge/dream/vision/impression/etc. that you received was really from God. It was just, open up your Bible and read. Really? Really. So freeing. So unmystical. Not to mention, so biblical.

Testimony of a Former Mystic