Mindfulness For Children: Buddhism For Tots

By Marcia Montenegro (Christian Answers For the New Age)


“We are here to awaken from our illusion of separateness.”
― Thich Nhat Hanh, Zen Buddhist and author of bestsellers

“Be a lamp unto yourself.” ― Reputed to be the last words of Gautama Buddha

A friend at church gave me an article from Scholastic Parent and Child Magazine (October 2011), which had been given to her son and the other children in a public school kindergarten class to bring home. The article, “It’s All In Your Mind,” by Lynne Ticknor, promotes mindfulness, a Buddhist concept and meditation practice, and offers a brief interview of Goldie Hawn and her Mind-Up program for schools.

THE RELIGION OF IT

The article refers to mindfulness as “based in the philosophy of Buddhism” and quickly adds, “But it’s not religion” and “there are no spiritual overtones.” However, the very concept and practice of mindfulness is religious; mindfulness is the 7th step in the Buddhist Noble Eight-fold Path. Its increasing visibility and acceptance in the West is largely due to its promotion by Buddhist adherents, such as Jon Kabat-Zinn, a Zen Buddhist who has heavily influenced the health community, and by Thich Nhat Hanh, a Buddhist monk and bestselling author.

Buddhism is known as a world-denying religion. It teaches that reality as we see and experience it is not, in fact, reality.* We think it is only because we identify with  our body, feelings, thoughts, sensations, and reactions, as a result of having been born into this world. There is no self (no-self is called anatman or anatta); the concept of self is a result of these false identifications with the world. Suffering is caused by desire; and birth in this world, along with our physical and mental processes, feed desire, thus continuing the cycle of desire and suffering through continual rebirth (samsara).

The only way to stop this cycle and be free of samsara – which is the goal of Buddhist practice – is to detach from desire. One of the chief methods to accomplish detachment is the practice of mindfulness. Mindfulness involves altering one’s thinking and outlook via Buddhist mindfulness meditation and practices by detaching from mind and self through nonjudgmental observation. This includes the commonly heard maxim, “Be in the present,” since the goal includes detaching from past and future.

Practicing mindfulness supposedly prepares one for a breakthrough in perception, an awakening to reality as it really is, which is formlessness (sunyata, usually translated as “emptiness”). Mindfulness is particularly emphasized in Zen Buddhism and, aside from TM (Transcendental Meditation), is the Eastern practice that has most infiltrated the West.

Although presented as spiritually neutral, the origin and goal of mindfulness belies that stance. Many are not aware that the true goal of Buddhism, nirvana, is not some kind of Buddhist heaven, but is actually the state one reaches when one has shed all attachments and illusions, thus freeing oneself from desire and rebirth. Nirvana means “to extinguish” and is the state of cessation of desire and illusion, and therefore of suffering. What is this state like? Buddhism offers no clear answer.

THE BREATHING OF IT 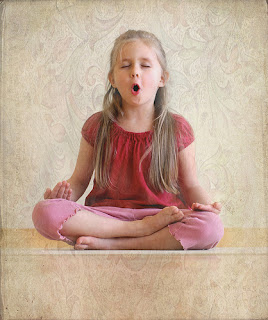 The article states that children are taught to focus on their breathing, “an age-old exercises in finding calm and balance – or their ‘center.’”  One photograph shows a mother and a child sitting in lotus position with eyes closed.  Another shows two young children (about age 6) sitting side-by-side, in a lotus position with eyes closed. Clearly, there is more than just breathing going on. The breathing technique is part and parcel of the mindfulness meditation.

Mindful meditation involves breathing a certain way, but it is also a way to transcend thinking. In fact, the mind is seen as a barrier. Focusing on slow breathing is meant to transcend conceptual thinking. Breathing in this way brings one into an altered state where critical thinking and judgment are suspended. In Buddhism, such thinking interferes with spiritual insight.

Buddhism absorbed much from Taoism, which sprang from early Chinese shamanism that believed a universal force, chi, infuses the world. In fact, Zen Buddhism is a mixture of Taoism and Buddhism which came from China and was called Chan (called Zen in Japan). Controlling breath was part of controlling and balancing chi, thus achieving health and longevity (in Taoist thinking). This idea of the breath as centering is very similar to the Taoist teaching that one must base one’s self in the flow of chi and thus balance the two forces of yin and yang.

Even if the children are not doing a full-on mindfulness meditation (which would be difficult for most children since they cannot stay so still for long), they are being introduced to it, taught it, and told that it is the way to deal with their feelings and “intense emotions.” Being told that this is how to deal with anger or fear may also give the subtle message that emotions are a bad thing.

While it’s true that taking a few deep breaths when upset may calm one down, mindfulness goes way beyond that. Mindfulness as promoted in schools is communicating to a child that he should always be calm, always clear-headed, always in control. This certainly could convey a negative message to more emotional children, and to children with various psychological, neurological, and emotional problems as well as making them self-conscious about their feelings.

We have a right to ask: Is this a healthy teaching for children? Are children, especially in the lower grades, able to handle such information? Should they be worried about their emotions? At the very least, using mindfulness should be a decision for a parent, not for the school or educators.

THE STUDIES OF IT

Whenever we see references to studies with no further information, we should ask: Who did these studies? How were they done? How big were the studies? Have the results been published in professional peer-reviewed journals? None of that information is provided here, leading this writer to wonder if such “studies” were done by mindfulness-friendly followers or organizations.

Moreover, how would one measure if a child is more optimistic or compassionate? Is this not a subjective assessment? What standards are being used? In short, this reference to studies should be dismissed since no scientific references or data is given, and the claims are unreasonably overstated. These are all indicators of claims with little or no factual data or basis.

THE HYPE OF IT

Some educators are using visualization, meditation CDs and an iPad or iPhone app called BellyBio, “that helps regulate breathing rhythms.” Guided visualization is a form of hypnosis, so this should cause alarm, if indeed this form of visualization is being used.

Most meditation CDs also use forms of hypnosis. In fact, this writer cannot conceive of a meditation CD that would not be inducing a state of  hypnosis; that is just the nature of meditation CDs. And do parents really want teachers trying to “regulate breathing rhythms” in their children?

Mindfulness is now being marketed as aggressively and as deceptively as yoga has been. The word “compassion” is being joined with the term “mindfulness” (one example is a book recommended at the end of the article, Mindfulness: Mothering with Mindfulness, Compassion, and Grace by Denise Roy). Buddhist teachers make frequent use of the word “compassion” (this is very common with the Dalai Lama) but the problem is that non-Buddhists do not know what is really meant by this term.

Compassion in Buddhism is not simply having empathy or care for people. Compassion includes the Buddhist view that all non-human beings (called “sentient beings”) are in need of rebirth as humans, because only humans can attain enlightenment. Since rebirth can bring a human into a non-human state, the Buddhist must spread Buddhist teachings and work at his own enlightenment in order to help advance Buddhist truths so that all can eventually be liberated from the cycle of rebirth. In Buddhism, Buddhist enlightenment is the only way for such liberation. Buddhism may give lip service to an embrace of all religions, but Buddhism teaches that only the Buddhist path can liberate.

Parents needs to monitor and mind carefully what is going on in their child’s classroom. They need to ask questions about all activities!

Scholastic is the parent company of MindUP, the program started by actress Goldie Hawn, a practicing Buddhist. Scholastic, as many know, is a purveyor of many materials and programs in public schools. It is a global enterprise, creating and distributing “educational and entertaining materials and products for use in school and at home, including children's books, magazines, technology-based products, teacher materials, television programming, feature film, videos and toys. Scholastic distributes its products and services through a variety of channels, including proprietary school-based book clubs, school-based book fairs, retail stores, schools, libraries and television networks; and Scholastic.com” (http://www.scholastic.com/aboutscholastic/peoplehistory.htm).

The promotion of mindfulness by an educational corporate giant such as Scholastic is a prime example of how Eastern beliefs are being endorsed and distributed into the culture. The same thing has been happening with Yoga, which is being promoted by corporations as well as government agencies (along with such practices as Feng Shui, Tai Chi, and many forms of New Age alternative heating). Children are the most vulnerable and are totally unable to critique or assess such ideas; for that reason, they make the best targets.

I think it is too late to stop this wave of Eastern spirituality. Therefore, prayer and discernment, as well as the willingness to speak out, are needed. Parents can talk to the teacher or principal and opt their child out based on religious views. Even if the school denies that mindfulness (or Yoga) is religious, the parent can state that he or she believes it conflicts with his or her religion and how the child is being raised. There is much data online that would help make a parent’s case that mindfulness (or Yoga) is religious.


*“Developing wisdom is a process of bringing our minds into accordance with the way things really are. Through this process we gradually remove the incorrect perceptions of reality we have had since the beginningless time.” (The Dalai Lama, An Open Heart [Boston/New York/London: Little, Brown and Company, 2001], 86).

** On boosting the immune system:


“The idea of boosting your immunity is enticing, but the ability to do so has proved elusive for several reasons. The immune system is precisely that — a system, not a single entity. To function well, it requires balance and harmony. There is still much that researchers don’t know about the intricacies and interconnectedness of the immune response. For now, there are no scientifically proven direct links between lifestyle and enhanced immune function . . . < . . .> . . . researchers are still trying to understand how the immune system works and how to interpret measurements of immune function.” http://www.health.harvard.edu/flu-resource-center/how-to-boost-your-immune-system.htm

“So when something allegedly boosts the immune system, I have to ask what part. How? What is it strengthening/boosting/supporting? Antibodies? Complement? White cells? Are the results from test tubes (often meaningless), animal studies or human studies? And if in human studies, what was the study population. Are the results even meaningful? Or small, barely statistically significant, outcomes in poorly done studies? The answer, as we shall see, is usually nothing.” http://www.sciencebasedmedicine.org/index.php/boost-your-immune-system/

NOTE ON WRITER: The writer of this article was involved for about 14 years in various forms of Eastern meditation practices, particularly Zen. She is familiar with the effects of such meditation, which gradually lead to a change in one’s worldview (perception of self and reality).