Breaking Dawn, The Movie, Part One: Bloodier Than Ever

By Marcia Montenegro (Christian Answers For The New Age)

Thank you to Marcia Montenegro for writing this review of Breaking Dawn, the movie version of one of Stephanie Meyer's books from her enormously popular Twilight series. The reason we are publishing this review on a Christian discernment blog is because many Christian women have become ensnared by these books. We have written a 2 part series, from a Christian perspective, on the Twilight books/movies here and here. Also, please note, there is some graphic content in this review that might be disturbing to some readers.

Note from Marcia Montenegro: This is an overview of the movie with comments, not a review, and not a summary of the plot or characters. 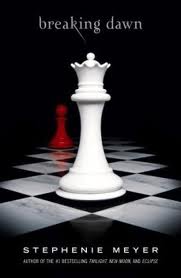 This movie is part one of the story based on the last book in the Twilight series. Bella, a human, and Edward, a vampire, are to be married, which means at some point she must become a vampire. This is something Bella has wanted for a long time, so she is delighted.

Early in the movie, Edward tells Bella about his past when he decided to give in to his blood lust as a young vampire. However, he killed only murderers, as Bella kindly points out. Edward tries to get Bella to consider changing her mind about becoming a vampire but she is not to be persuaded.

Bella encounters her friend Jacob in the woods right after the wedding. Jacob is a Native American who, along with some others in his tribe, is able to turn into a large wolf.  The wolf creatures are the ancient sworn enemies of the vampires.

Jacob fell hard for Bella after she first came to Forks, and is upset to discover that Bella plans on a “real” honeymoon. To Jacob, this means that Bella will die because Edward is too strong as a vampire to have intimate relations with a human. This danger, and this alone, is the reason that Bella and Edward have abstained from total intimacy throughout the story – not for moral reasons at all, only due to fear that Edward might kill Bella in the act of love (however, Bella tried many times to seduce Edward, and they slept in the same bed). Distraught, Jacob tells Bella she will die.

Bella and Edward arrive at their honeymoon destination. The marriage is consummated that night (brief and not too graphic). The next morning, when Bella awakes, she discovers the room is wrecked (apparently Edward got carried away). Later, Edward discovers bruises on Bella’s body, made by him during the lovemaking. The movie has softened this from the book because in the book, the description depicts more severe bruising than what is shown here.

Still on the honeymoon, Bella realizes she is pregnant and is already showing, which is normally impossible. Edward and his family are alarmed, as a human conceiving a vampire baby is unheard of.

The maid who works at the resort, apparently due to her ethnic background, has special knowledge of local legends of vampires and similar ghouls, so Edward asks for her advice. She touches Bella’s belly and says “Death” (in Portuguese – they are in Brazil).

Upset, Edward promises Bella that Carlisle (the head of Edward’s clan and a medical doctor) “will get that thing out.”

Edward and Bella rush home where the vampire clan is in a tizzy over the pregnancy. The baby is growing at a rapid rate, about nine times faster than in a normal human pregnancy. Most want Bella to let Carlisle abort the baby, but Bella is against this, and has Rosalie on her side. Edward even gets Jacob to try to talk Bella into ending the pregnancy, but Bella refuses. Jacob is so angry about this that when he leaves, he rushes off as a wolf (apparently, you have to run really fast to turn into one, unless attacked by a vampire).

Jacob finds himself at a gathering of other wolf-humans, led by Sam, who are intent on killing the unborn child for fear it will be too strong. There is sort of a wolf pack-think, so the other wolf creatures have picked up on this information about Bella from Jacob’s mind. Jacob defends Bella (of course) and says he will not do it (this is all in wolf-speak but the movie people have kindly translated it for us).

Back at the vampire crib, Edward is scanning pictures of strange hybrid babies on the Internet, and everyone is sitting around looking pained and gloomy.  Meanwhile, Bella is suffering real pain because the baby is crushing her “from the inside out” (said at 1:13:57 in the film – just so you know I really watched it!).

Carlisle gives Bella the bad news: the unborn child is too strong and Bella can’t get the nutrition she needs because the baby is taking all of Bella’s nutrients and still not getting enough. Carlisle fears Bella’s heart will give out before the birth.

All at once, everyone realizes that the unborn baby needs human blood. Carlisle conveniently has some O positive blood (set aside for Bella) which he fetches. Hesitant at first, Bella drinks the blood from a cup through a straw. After the first sip, she announces with blood stained lips, “It tastes good.” (Bella at this point is not a vampire but seems to be getting ready for it superfast). The movie is milder on this scene, because in the book, Bella greedily drinks so much blood that Carlisle must rush off to get more.

THE BIRTH AND ALMOST DEATH

Carlisle and Esmee, the heads of the vampire clan, are hunting (animals) in the woods when the baby comes. The birth is a horrific scene with Rosalie going wild over the blood (she wants to drink it), Bella screaming “get him out now,” and Edward working at her with a knife. Bella passes out and soon there is a baby girl.

As soon as the baby is born, covered with blood, Bella’s heart gives out. Edward grabs a huge plunger filled with his venom (a vampire’s saliva –since they are dead, they don’t have regular saliva), shoving it into Bella. He tries CPR but Bella seemingly remains dead. Jacob, who has been present the whole time, runs outside, enraged and grieved.

Edward begins biting Bella all over her body, injecting his venom into her veins to “turn her” so that she will become a vampire. This scene is very graphic and repulsive in the book and has been mercifully shortened for the film.

The news goes out that Bella is dead (though she is really in a deep state of turning into a vampire, which takes 3 days). Jacob returns to the house, intent on killing the newly born girl, whose birth he believes has killed his true love, Bella. As soon as he sees the baby, (held by Rosalie, who apparently has overcome her blood craving problem), however, he “imprints” on her.

“Imprinting” is how the wolf creatures find their mate. It is a special feeling; no choice is involved, it just happens. So now Jacob has imprinted on Bella’s just born baby girl. Thus ends his fiery passionate love for Bella as it shifts to her daughter. This imprinting saves Bella’s baby from the pack because wolf-creatures cannot hurt anyone on whom one of them has imprinted (I found this romantic adult-baby bonding rather repellent).

While Bella is in the state of turning into a vampire, there is a dream sequence where she sees her human life back to babyhood. As she wakes, she opens her eyes and they are red. Bella is now a vampire, finally achieving one of her fondest desires since she first fell for Edward.

The stage is set for part two, schedule for late 2012.

There are no redeeming qualities in this film. The violence, blood and gore, unhealthy romance, constant anger, and obsessive passions distort anything that begins normally into a disturbing and revolting frenzy.

One wonders why Jacob and Edward are so crazy about a sulking self-absorbed girl like Bella, who exhibits few attractive qualities. Jacob broods throughout the entire movie, while Edward smiles wanly only a few brief times.

The only thing left for viewers to look forward to in part two is how Bella will live life as a vampire. This is a rather dark and unappetizing thought to contemplate considering what has been revealed in part one.