On February 23, 2012, an article titled Rick Warren Builds Bridge to Muslims was published in the Orange County Register (Orange County, California). It went off like a bomb in the evangelical community. This article, written by staff writer Jim Hinch, reported that Rick Warren of Saddleback Church was working on an interfaith document (known as King's Way) aimed at healing "divisions between evangelical Christians and Muslims by partnering with Southern California mosques and proposing a set of theological principles that includes acknowledging that Christians and Muslims worship the same God." In the immediate ensuing dust-up, bloggers blogged, talk show hosts talked, and social media sites were abuzz with discussion. What did this mean? Was Rick Warren now embracing the heretical, but trendy, new movement known as Chrislam? Eight days later, Rick Warren finally addressed the issue by giving a very clear and unambiguous statement affirming his Trinitarian, his Christian beliefs, and stating unequivocally that Christians and Muslims do not worship the same God. (The entire article can be read here.) 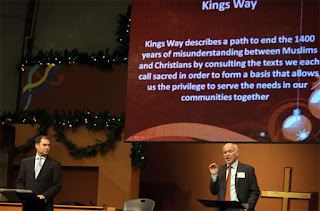 But now the writer of the original article in the Orange County Register, Jim Hinch, has released a portion of the King's Way document. Is this an interfaith document that gives the impression that Muslims and Christians worship the same God? You be the judge:


1. The primary source for this story was a five-page document jointly drafted by Abraham Meulenberg, a Saddleback pastor in charge of interfaith outreach, and Jihad Turk, director of religious affairs at the Islamic Center of Southern California, a mosque in Los Angeles. The document was unveiled at a December, 2011 dinner at Saddleback Church attended by approximately 300 Saddleback members and members of Southern California’s Muslim community. At the dinner a Powerpoint presentation described the document, and the King’s Way outreach effort which inspired the document, as “a path to end the 1,400 years of misunderstanding between Muslims and Christians.” The document, which was given to me by a source for this story on condition it not be published in its entirety, outlines several areas of theological agreement between Christians and Muslims and commits members of both faiths to three goals: becoming friends; making peace; and sharing “the blessings of God with others.” Here is how the document describes the points of theological agreement:

I. WHO: we believe in

The Register story based the phrases “same God” and “one God” on the phrasing in this document, which states that Christians and Muslims believe in one God.

2. Rick Warren initially posted a comment to the article claiming that the article contained “multiple errors.” That comment was later deleted, I presume by Warren. After seeing that comment I reached out to Warren’s director of communications. On Monday, Feb. 27 a Saddleback representative called and told me that while the Register story was factually accurate, folks at Saddleback would prefer that the opening paragraph read “Muslims and Christians believe that God is one.” Following a discussion with a Register editor Saddleback decided to withdraw its request for a clarification. At no time has anyone at Saddleback said to me or to anyone else at the Register that the story contains factual inaccuracies.

3. Warren states in his white paper that “no one even talked to me about that article!” I made numerous attempts to contact Warren, both by phone and by e-mail, before the story was published. I was eventually told by Warren’s director of communications that Warren was too busy with other projects to speak with me or to e-mail a response to the story’s main claims, which I had e-mailed to the communications director. Instead I was put in touch with Tom Holladay, an associate senior pastor at Saddleback. I ran all of the story’s claims by Holladay and he affirmed all of them, including the language of the King’s Way document and the fact that King’s Way was an effort to build bridges of friendship and cooperation, not an attempt to evangelize. During my conversation with Holladay I asked whether the King’s Way effort, including the December dinner and the theological document, was done with Rick Warren’s approval. “Of course it has his approval,” Holladay replied. It is neither fair nor accurate to claim that this story was published without attempting to solicit Rick Warren’s response.

4. Warren claims in his white paper that it is “flat-out wrong” that either he or members of Saddleback have promised not to evangelize the Muslims they are working with in the King’s Way effort. As I stated above, that was not what I was told by Tom Holladay. Also, every one of the Muslim sources I talked to for this story emphasized that both sides promised not to evangelize one another. Indeed Muslims told me that the promise not to evangelize was one of the things that enabled them to overcome their wariness toward evangelicals and build bonds of friendship. Again, no source for this story, including at Saddleback, ever told me that the intent of the King’s Way effort was to evangelize Muslims.

This story, obviously, has generated a great deal of passionate response. I respect Rick Warren’s desire to make his views and intentions clear. However I do not believe it is fair to question the accuracy of the Register’s story or the way it was reported. I have had several conversations with people at Saddleback following the publication of the story, including with the church’s director of communications. Everyone I have talked to from the church has told me that the story is entirely factually accurate but they wish certain phrases had been worded differently. However, since those phrases stem directly from a printed document whose authenticity no one has questioned, everyone agrees that there is nothing in the story to correct.

Why is Rick Warren Quoting Universalist Henri Nouwen?
Posted by Christine Pack at 7:18 AM