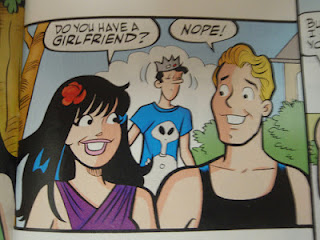 There's a new kid on the block in Riverdale, the fictitious home of the lovable characters of the Archie Comics.  His name is Kevin Keller and he's the comic strip series' first openly gay character.

From the official press release:


"Kevin will appear in September's VERONICA #202, in a story called "Isn't it Bromantic?" Kevin Keller is the new hunk in town and Veronica just has to have him. After Kevin defeats Jughead in a burger eating contest at Pop's Chocklit Shoppe, she desperately latches onto him. Mayhem and hilarity ensue as Kevin desperately attempts to let Veronica down easy and her flirtations only become increasingly persistent."


"The introduction of Kevin is just about keeping the world of Archie Comics current and inclusive. Archie's hometown of Riverdale has always been a safe world for everyone. It just makes sense to have an openly gay character in Archie comic books."

I often hear people questioning if God will soon judge America.  Well, a plain reading of Romans 1 reveals that we are already under God's judgment and wrath.  In this chapter, there is first a suppression of truth, then a disdainful arrogance that neither acknowledges nor praises God, then comes worship of the creation rather than the Creator, and after that a sexual revolution, followed by a homosexual revolution. Have we not had God removed from classrooms, football fields, lunch meetings, courtrooms, etc.?  And how about Earth Day, with its strident pleadings to "go green" and "live sustainably?"  (Imagine if the reverse of this were true, and the Creator was worshiped instead of the creation, with the same level of media intensity given to pastors and Christian leaders pleading for God to be glorified and lifted up. Hard to imagine a reversal so profound, isn't it?) As for a sexual revolution, we've had that, beginning in the 1960s and followed by, yes, a homosexual revolution that continues today. So no, these aren't indicators that judgment is coming, as some people think; they are indicators that judgment is already here.