"God" As A Crazy Stalker Girlfriend?

It's bad enough that this modern Christian era has brought us the girlified "beggar Jesus," standing at the door of our hearts, hat in hand, just tap-tap-tapping and hoping against hope that we'll let him in to be Lord of our lives.  Now we have Mark Galli, Senior Managing Editor at Christianity Today, presenting us with an even more slanderous, idolatrous view of God:  God as a Divine Drama Queen.  Writes Galli:


"I like a tranquil, even-keeled, self-controlled God. A God who doesn't fly off the handle at the least provocation.....When I read my Bible, though, I keep running into a different God, and I'm not pleased. This God says he "hates" sin. Well, he usually yells it. Read the prophets. It's just one harangue after another, all in loud decibels. And when the shouting is over, then comes the pouting.....This God is like the volatile Italian woman who, upon discovering her husband's unfaithfulness, yells and throws dishes, refuses to sleep in the same bed, and doesn't speak to him for 40 days and 40 nights." 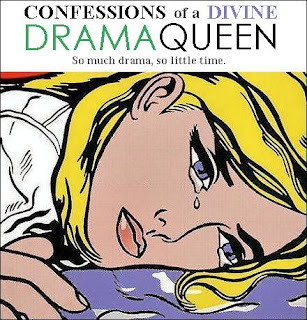 What seems to help Mr. Galli find this "Divine Drama Queen" acceptable as "God," however, is the fact that this "God" only acts this way because he's just so crazy-in-love with this fickle, foolish, unfaithful man that he has created that He just can't help himself. His worshipful love of this man-creature, you see, makes him a little nutty.
No longer standing patiently at the door like the girlified beggar Jesus; according to Mr. Galli, God is now jumping up and down in front of your car like a crazy girlfriend you can't break up with. He/She just won't let go. Our supremely narcissistic, self-absorbed, navel-gazing postmodern era has produced a new version of God that perfectly reveals the nature of the culture from which it has sprung: Crazy Stalker Girlfriend God.

So no more polite God, standing outside of your door knocking.  But hey, at least that "God" didn't require a restraining order. Not so with Crazy Stalker Girlfriend God, who loves these man-creature beings He has made sooooo much that it apparently makes him, well, a little bit unhinged:


"(M)ost days, I secretly wish God were not like this. He's like the crazy uncle in the family. At some point, you have to let your friends know about him, but you'd just as soon avoid having to introduce him....The road to hell is paved with reasonable religion with a non-anxious god. Most days, I'm pretty happy driving down that road. But I keep running into this Crazy Fellow along the way. At every stop light, he jumps up and down to get my attention. He pounds on my window asking me where the heck I think I'm going. He stands on the front bumper, shouting at me to turn around. When all else fails, he throws himself in front of the car. He's such a drama queen."

I'm sorry, but it's hard to imagine a view of God more slanderous and man-centered than the one Mr. Galli has crafted for himself. And to make matters even worse, further in the article Mr. Galli also espouses the heretical view of Open Theism, which is a (wrong) view of God as sort of a clockmaker deity, who winds  everything up, sets it in motion, but doesn't really have any control over the outcome.  With this "God," it's all a big gamble, "God" feverishly throwing dice during a Vegas binge, just hoping it's all going to come out okay in the end:


"(H)e created beings with deep awareness of themselves and their Creator, who could envision the absolute heights they could scale and the perfect love they could enjoy, and who knew they could have all this forever and ever.  It was a gamble, though.....And yet God gambled. He has thrown everything into this grand enterprise. He made the creation of these beings not a matter of course or compromise, but a matter of life or death. Everything was on the line with this roll of the dice."

Presumably, "everything was on the line" means that once the Fall happened, God had to turn to Plan B, which involved turning into the Crazy Stalker Girlfriend who, having been rejected, just didn't take it well.  In a strange way, the heresy of Open Theism actually makes Mr. Galli's view of God make more sense: if, as in the Open Theism view, God had no control over the outcome, then of course he would turn into a Crazy Stalker Girlfriend.  After all, he's got a lot invested in this relationship...he can't just walk away!


In all seriousness, let me ask the question: who needs to accept who in the relationship between man and God?  Do we need to create a version of God that we are comfortable with so that we will accept him?  ( i.e, the Purpose Driven "God," the Best Life Now "God," the Name It and Claim It "God," The Shack "God" who heals our emotional wounds, the Emergent "God" who serves as our role model for social justice, etc.)  Or do we come hat in hand, like the beggar that we really are, in need of God's mercy, in need of a Savior.

I would beg Mr. Galli to fall on his face and repent from this idolatrous, false, slanderous, man-worshiping portrayal of  God.  This Crazy Stalker Girlfriend God is horribly demeaning to the true nature of the God of the Bible, and worse, does not have the power to save.  Mr. Galli, allow me to introduce you to the one true God.....