Right now, there is a huge struggle going on inside reformed circles over the issue of HOW it is that we hear from God.  Honestly, this does not seem to be an issue that should be within 100 miles of reformed thought.  And yet it has come right into the reformed camp, and in a very big way.

What is a Calvinist?  A Calvinist has generally been maintained to be a Christian who holds to Calvinist thought, as espoused by John Calvin, one of the key figures in the Reformation.  Calvin wrote "Institutes of the Christian Religion," in which he put forth the teaching that the knowledge of God could not be inherently known by humanity (inner knowledge) nor could it be understood by observing the world (external knowledge).  Instead, the knowledge of God could only be obtained through the study of Scripture (special revelation).  Wrote Calvin:  "For anyone to arrive at God the Creator he needs Scripture as his Guide and Teacher."

What is a Charismatic?   While a Charismatic would say they believe the Bible is God's authoritative Word, in practice these Christians live as though they do not believe that the canon was ever closed, and therefore believe that extra-biblical revelation through ongoing prophecy/tongues is one way that we continue to "hear" from God in subjective and mystical ways.

Charismatic teaching challenges Calvinism as well as the very straightforward teaching in Scripture that the canon was closed after (1) Jesus the greatest and final Prophet came in the flesh and (2) the New Testament was completed.  Charismatic thinking is based mainly in taking 1 Corinthians 12-14 out of context.  These passages, while they do speak of the charismatic gifts and exhorts Christians to earnestly desire and seek these gifts, were written at a time when the canon was still "open" and God was still using the supernatural charismatic gifts (tongues, prophecy) to spread his gospel message of salvation far and wide.  "Tongues" was the gifting by which, say, a Greek fisherman, could travel to another country and begin to speak in the language known to that region, but which he himself had no training in. And thus the gospel burst forth into the world in a dramatic and supernatural way.

"In the past God spoke to our forefathers through the prophets at many times and in various ways, but in these last days he has spoken to us by his Son, whom he appointed heir of all things, and through whom he made the universe." (Heb 1:1-2)

1 Corinthians, you see, was written approximately 55 AD, BEFORE the canon was closed....and during the time when all the supernatural gifts were still in full force.  1 Corinthians, therefore, predates the writing of Hebrews (67-69 AD) by 12-14 years.  In context, we understand that there are no more "words from God."  But not so today's Charismatic Calvinists, who seem to want to have it both ways.  They want to claim both Calvinism, which teaches that study of Scripture is how we hear from God, as well as the Charismatic gift of prophetic words from God, a gifting that is no longer active, per Heb 1:1-2.

Now, shouldn't it go without saying that when we read a book - any book - we understand without being told that we must understand what it is saying in context? And yet, with the Bible, people seem to want to pull verses out and make them stand alone, regardless of contextual setting.  For instance, when we read classic literature, say Sophocles' Antigone, we would read it in context: At the beginning of this epic, King Creon has emerged victorious from the war, but by the end he is weeping, and it is proclaimed, "All is lost!" Well, which is it? is he a proud conqueror? Or a broken man who has lost everything? Well, he's both.....there is a story arc you see.....

Let's not forget that the Bible is not just guidance for us: it was real and historical and played out in real life.  Paul's letter to the Corinthians exhorting them to prophecy predated later revelation given that closed the gift of prophecy.  But it is only through careful, systematic study of the Bible that we can know these things, and yet, it is this "heavy lifting" kind of study that so few Christians today seem interested in doing.  They want sound bytes.  They want short sermons with a little moral saying at the end.

A "Charismatic Calvinist," therefore, is an oxymoron, a contradiction in terms, like "jumbo shrimp" or "virtual reality."

And yet, some of today's Calvinists seem determined to fight for their "right" to hear "words from God" that come to them from outside of Scripture.  Why is this?  Well, I would submit that the main problem is that we are living in postmodern era, and even without realizing it, Christians have allowed themselves to be influenced by postmodern thought.  For those who don't know, postmodernism is a belief system that proclaims that there is no so such thing as universal truth that is true for all times and all ages.  All "truth" according to postmodern thought, is culturally constructed, and any supposed universal truth claims would merely be someone's way of trying to control another.  Whenever you hear someone say, "Well, you have your truth, and I have my truth, and even though our 'truths' are different, we can both be right," you are talking to a postmodern.  The result of postmodern thought, naturally, is that subjective experience is valued far more than factual data.  In Christianity, this postmodern thought has given rise to people claiming, variously, to hear words from God, and some even claiming to be able to mystically encounter God through various disciplines (spiritual formation, spiritual disciplines). 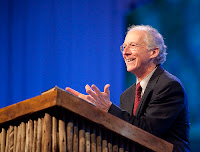 So now to the point of this post: Dr. John Piper of Bethlehem Baptist Church in Minneapolis, MN has typically been included on any list of conservative, reformed, Bible-believing teachers.  Dr. Piper has also generally been well-regarded and very respected in an increasingly liberal and chaotic Christianity.  However, in a recent video post (dated 4/20/10), Dr. Piper seems to be straying from his conservative roots in the following exchange (starting around 45:55):

Question: "To turn to the miraculous gifts - tongues, healing, prophecy - where would you say the place for those gifts would be in the life of the church today?"

Answer (John Piper): "What I think, whether it's the right thing to say - I'm not gonna die on this hill - they are most effectively and appropriately used in smaller groups, rather than Sunday morning.  Sunday morning meaning, the large gathered body with lots of people, and lots of strangers, and the need for some kind of movement in the service, rather than the whole thing being devoted over to individual expressions.  And so when I think of trying to do whatever elements of 1 Corinthians 12, 13 and 14 are appropriate to do today, I would want my people to know I believe in those things, I want them to flourish in those things, and I would think spontaneously and in relationships, and especially in small groups, they would take the time and ask people, "Did you bring anything from the Lord tonight that you think we need to hear? You can use whatever language you want. You can say 'Have you got a word of knowledge for us?' or 'Got a word of prophecy?' And if you're scared of that kind of language you can say 'Has God impressed upon you in some way something that you think somebody in this room, or all of us, need to hear, from your walk with God?' And open yourself up to that, they may say something that just penetrates right through to the very core of somebody.... "

My question is, with all due respect to Dr. Piper who is not only my elder but a respected teacher, why are Christians today so determined to go outside of the Bible to "hear from God?" God gave us 66 books of inerrant, inspired revelation - is that not "enough?"  Do we need more than "mere" Scripture?  And yet, besides the video above, there is more troubling evidence of a lack of discernment to be found on Dr. Piper's website (Desiring God), which sells books promoting and teaching how to get mystical, extra-biblical "words from God" through Roman Catholic Monastic practices.  These books include:

Experiencing the Depths of Jesus (by Madam Guyon, a Roman Catholic mystic)

The Ragamuffin Gospel (by Brennan Manning, a Roman Catholic mystic) 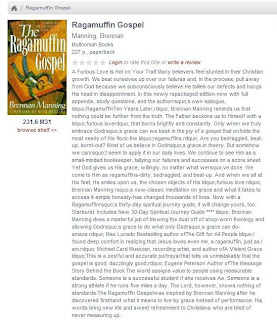 The Practice of the Presence of God (by Brother Lawrence, a Roman Catholic mystic)

Our Reformers gave their very LIVES to protect Sola Scriptura - God speaks to us through Scripture alone - and now we're going back to the bondage of Roman Catholic mysticism and mystical experiences and words from God. Truly, we are living in an unbelievable time.

As for myself, I've had enough "mysticism" to last a lifetime.  I bow the knee at Scripture that tells us "The hidden things belong to the Lord," (Deut 29:29).  That's good enough for me. The supernatural arena is God's and God's alone, and I have given up my "right" to seek after special, extra-biblical "words from God" and mystical experiences. If God should sovereignly choose to intervene in my life in some unmistakably supernatural way, fine. If not, fine.  As if taking my heart of stone and making it a heart of flesh, and making my dead bones live, wasn't enough of a supernatural experience! It is truly a sign of these postmodern times in which we live when today's "Charismatic Calvinists" proclaim by their actions (of going after mystical encounters) that the Bible is not "enough."  May God help us and give us discernment in this time.  Can we be in the period described in Scripture as the great falling away?  When someone as solid as Dr. Piper shows signs of falling away from the faith that was "once for all delivered to the saints," can the end be very far away?