The following is a great review by my friend (and former New Ager) Marcia Montenegro, of the current movie Hereafter. The thing that jumped out at me in Marcia's review was her commentary on a line from the movie about a "conspiracy of silence" that supposedly surrounds the supernatural realm with regards to what happens to people "on the other side." It's really almost laughable to me that Clint Eastwood would proffer such a theory: after all, as a culture, we are almost insatiable when it comes to having an appetite for the supernatural.  There is no shortage today of supernaturally-themed movies / TV programs / games / toys / books / etc.  And while we may be somewhat more sophisticated in our "paganess" today, in that we don't wear bones through our noses and do rain dances, the underlying sin is the same....and that is a desire for hidden knowledge, and a rebellion against God's revealed truth in his Word. God's Word tells us plainly that astrology, communicating with spirits, communicating with the dead, divination, reading signs, etc. are all off-limits...and yet what fascinates our culture and our youth today? Exactly those things. This is a movie that Christians should steer clear of.  And now, for my friend Marcia's more in-depth review...... 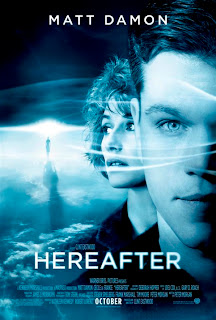 This movie, directed by Clint Eastwood, is a rather understated meditation on what lies beyond death. There are three stories around this theme that converge at the end. The movie offers no clear answers but does promote a belief that one can contact the dead.

MARIE THE JOURNALIST
One story revolves around a well-known French journalist, Marie, who has a near death experience when she is hit on the head and goes underwater in a tsunami, almost dying, or perhaps dying and coming back. It is not clear which. However, the film shows this as a fleeting episode and all Marie sees is a bright light and some shadowy figures. It is more of a dreamlike vision than what is normally thought of as a near death experience.  This experience sends her on a quest to understand what happened, and to begin to believe that there is life after death. Her obsession with this finally leads her to talk to a hospice doctor who gives her some documents and then to write a book about it.

GEORGE THE FORMER PSYCHIC
Matt Damon stars as George, a former psychic in San Francisco who gave it up because he considers it a curse. He is persuaded by his brother to do a reading for a friend. When he briefly holds the man’s hands, he gets visions and is able to tell the man about his dead wife and give him a message from her. Trying to live a normal life, George takes a cooking class where he meets a beautiful woman. Later at his place, she finds out about his past. George tells her that he had an illness as a child that affected his brain and he had to have several operations, during which he died and came back. He tells her that after this he had migraines and nightmares, and then started seeing dead people. Thinking this was a mental illness, pills were given to him. They took away this ability but also deadened him in other ways, so he stopped taking the pills.

The woman talks George into doing a reading. He is very reluctant but does it anyway. He gets a message from her father about something her dead father did to her in her past that is emotionally devastating. She flees and George never sees her again.

MARCUS AND HIS TWIN
The third story involves a young boy and his twin brother in London whose mother is alcoholic and a drug addict. This bonds the boys even more closely together.  After the older twin, Jason, dies in an accident,  the younger twin, Marcus, deeply grieving, is moved to a foster home (due to the mother’s need to go into rehab). Marcus searches the Internet for psychics and mediums, and then steals money from the foster parents so he is able to consult several of them. None of them give a message from Jason. One day, Marcus sees George’s former website and this leads to the intersection of stories at the end.

Marie ends up in London at a book fair to read portions of her book, which is titled “Hereafter: A Conspiracy of Silence.” George leaves San Francisco after losing his job and travels to London to see the home of his favorite author, Charles Dickens. He, too, ends up at the book fair in order to hear a famous actor read Dickens. Marcus is taken to the book fair by his foster parents, whose son works there as a security guard.

THE CONVERGENCE
At the book fair, George comes across Marie and is captivated by her. When his hand accidentally brushes hers, he has a vision. She is also taken with him, though no reason for this is given. Marcus sees George at the fair and recognizes him: “You’re that psychic, aren’t you?” George denies it and tries to get away, but Marcus follows him, loudly declaring, “Yes, you’re that psychic! I saw you on the Internet!”

Marcus ends up waiting outside George’s hotel. Taking pity on him, George lets him into his room where, once again, he gives in to someone’s desire to contact a dead loved one.  It is no surprise to the viewer when George gets a message from Jason for Marcus since George has been accurate in the other readings. Jason has few words to say about how he is doing, “weightlessness” being one of them, an attribute he thinks is “cool.” Jason urges Marcus to live his own life and to stop wearing Jason’s cap. The final words from Jason are, according to George, “If you’re worried about being on your own, don’t be, because he [Jason] is you and you are him.” I do not find this message comforting at all but apparently it is supposed to be a profound revelation.

Marcus asks George where Jason is but George admits he does not know, even after all the readings he has done.  So there are some things even George does not know about life after death. Getting messages from the dead may bring comfort, or sometimes grief (as it does to the woman in the cooking class), but George is clueless as to the location of these dead people.

COMMENTARY
Although George is called a psychic, he is more technically a medium, someone who claims to contact or hear from the dead.  All mediums are psychics, but not all psychics are mediums.

The fact that George gets all his information by merely touching the person’s hands is not in keeping with the way most psychics and mediums operate. Normally, they go into an altered state (similar to a light hypnotic trance) in order to receive the information.  Also, they are not as accurate on all details as George is.  No psychic that I know of claims 100 percent accuracy.

It is interesting that the three stories converge in London, which is known as a center of spiritualism, a belief in and practice of contacting the dead.

Marie’s book title, “Hereafter:  A Conspiracy of Silence,” is a joke. Marie states that no one wants to talk about this topic. But what conspiracy or what silence do we see in our culture about near death experiences or life after death? In fact, we see the opposite! There is a surfeit of books, television shows, movies, and internet sites devoted to these topics, such as the movie “The Sixth Sense,” and others, and popular television shows like “Medium,” and “Ghost Whisperer.” A surplus of psychics and mediums offer to contact the dead. Sylvia Browne, James Van Praagh, and John Edward, who have all written bestsellers (and Browne and Van Praagh continue to write), are just a few of many. Books speculating on life after death, claiming to document messages from the dead, and proffering accounts of so-called near death experiences fill the bookstore shelves.

Any information on a dead person from a medium, if not coincidental or discovered through fraud, is coming from demons. All psychics and mediums have spirit guides whom they consider benevolent. Sylvia Browne often talks about hers, Francine, and has said that most of her (Browne’s) information about what she calls “the other side” comes from Francine. Naturally, these guides are demons and may be what the Bible calls “familiar spirits.” Mediums, psychics, astrologers, card readers, palm readers, and others cannot operate without them.

The movie, in providing a main character who seemingly can contact the dead, gives not a valid message about the dead or about life after death, but rather a deadly message: contact with the dead is possible and is acceptable.  This is a message that opposes God’s word and should be rejected.