How Much Witchcraft is Okay? 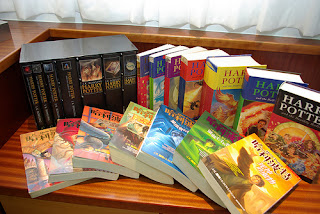 The final installment of the Harry Potter series opened nationwide on Friday, 11/19/10, with the release of Harry Potter and the Deathly Hallows.  This has been one of the most highly anticipated movie openings in cinema history, with many theaters playing the movie on multiple screens and adding midnight showings.

Christians, too, have been caught up in reading the Harry Potter books and watching the movies, making statements such as this:


"I have read and fallen in love with these books. There is no element of witchcraft to be found in them."

"This is an area of liberty for me."

"I've read the books and there is no witchcraft."

"It's all in good fun.  This is all fantasy and the magic has no basis in reality.  But the movies are exciting and fun to watch."


In her own words in an interview, author J.K.Rowling admitted that she studied witchcraft and mythology in order to write her books more accurately. She said, "I do a certain amount of research, so when I'm mentioning a creature, or a spell, I will find out exactly what the words were, and find out exactly what the characteristics of that creature or ghost were supposed to be." She went on to say that about one-third of what she had written is based on actual occultism. (J.K. Rowling interview on The Diane Rehm Show, WAMU, NPR, 10/20/99)


Brownies With a Difference

Many parents are hard put to explain to their youth why some music, movies, books, games, and magazines are not acceptable material for them to bring into the home to see or hear. One parent came up with an original idea that was hard to refute.

He listened to all the reasons his children gave for wanting to see a particular PG-13 movie: it had their favorite actors, everyone else was seeing it, even church members said it was great, it was only rated PG-13 because of the suggestion of sex-they never really showed it, the language was pretty good-they only used the Lord's name in vain three times in the whole movie, the video effects were fabulous and the plot was action packed. Yes, there was the scene where a building and a bunch of people got blown up, but the violence was just the normal stuff, it wasn't very bad. Even with all these explanations for the rating, the father wouldn't give in. He didn't even give them a satisfying explanation for saying, "No." He just said "No."

Later that evening, this same father asked his teens if they would like some brownies he had prepared. He explained that he had taken the family's favorite recipe and added something new. They asked what it was. He calmly replied that he had added dog poop. He stated that it was only a tiny bit and that all the other ingredients were gourmet quality. He had taken great care to bake it at the precise temperature for the exact time. He was sure the brownies would be superb.

Even with all the explanations of the perfect attributes of the brownies, the teens would not take one. The father acted surprised. There was only one little element that would have caused them to act so stubbornly. He assured them that they would hardly notice it at all. But they all held firm and would not try the brownies.

He then explained that the movie they wanted to see was just like the brownies. Satan tries to enter our minds and our homes by deceiving us into believing that "just a little bit" of evil doesn't matter. With the brownies, just a little bit makes all the difference between a great brownie and a totally unacceptable product. He explained that even though the smallest amout of dog poop makes the brownie totally unacceptible, they seemed to having no problem consuming a movie movie of similar ingredients. The movie people would have us believe the movies which are coming out are acceptable for adults and youths to see, they are no more so than dog poop brownies are edible!

Now when this father's children want to do something or see something they should not, the father merely asks them if they would like some of his special dog poop brownies and they never ask about that item again.

Now, I can't say what it should look like in your family as you work through this issue. To make hard and fast rules in this area is to fall into legalism.  But shouldn't we wrestle through these issues with much thoughtfulness and prayer, rather than just mindlessly allowing our children to consume what is cultural and popular?

I can say for myself that giving up my own attachment to these occultic types of books (including Harry Potter) was in some ways hard, because it's true, the characters are often magnetically compelling and the story-lines, of course, are designed to draw the reader in.  I prayed and prayed about it, and truly God did a work for me that I could not have done myself (this was when I was a very new Christian).  I began to be almost physically ill and was emotionally/spiritually very unsettled when I would try to read these books.  My new "spiritual eyes" just refused to cooperate with me when I tried to read these books!  I ended up going through the library in our home and filling 3 large garbage bags with stuff of this genre.  Up to that point, I truly had no idea how much of this stuff I had consumed and "enjoyed".....it was rather sobering, to say the least.  Again, I'm not saying that's going to be everyone's experience, but I really encourage Christians who think of this as an area of liberty to pray through this issue, and if they come under conviction, I would suggest beseeching the LORD for help in being free from the bondage to these things.

The passage that God really used to bring conviction for me was this:


"Let no one be found among you who sacrifices their son or daughter in the fire, who practices divination or sorcery, interprets omens, engages in witchcraft, or casts spells, or who is a medium or spiritist or who consults the dead.  Anyone who does these things is detestable to the LORD; because of these same detestable practices the LORD your God will drive out those nations before you. You must be blameless before the LORD your God." Deut 18:10-13

Unfortunately for those who would claim this as an "area of liberty" for them, there is no caveat at the end of the above passage which says:


"However, if you are a mature Christian and relish stories of an occultic nature, you may indulge your mind in them at your discretion."

Didn't Jesus teach us that harboring sinfulness in our minds (lust, anger) was the same thing as actually committing the sins themselves (adultery, murder)?  So the question must be asked: If Christians harbor the sinfulness of occultism in their minds through what they read, what would that mean, according to the standard that Jesus has given us? (Matthew 5:21-30)

Harry Potter and the Deathly Hallows: Is Death Still the Next Great Adventure?

What is Christian Liberty? by John MacArthur
Posted by Christine Pack at 9:01 AM