I know that the world at large views Christians as arrogant, judgmental and condemning.  And sadly, I have to say that many who claim the name of Christ are this way.  But when true, born again Christians are simply speaking what the Scriptures say, it is not us that the world finds itself at odds with......it is God.  There is something so supernaturally authoritative about Scripture that when we begin to speak it, it has the ability to pierce even those who seem the hardest, the coldest and the most closed off to the gospel.

I know this from personal experience.  I wanted nothing to do with the God of the Bible.  I much preferred the "God" of the world, which was a "God" who was ultra-tolerant, loving, and wanted only my personal best.  A "God" who didn't really care what I believed, so long as I was sincere in my beliefs.  This Universalist, all-paths-lead-to-me "God" was an easy "God" to worship.  He was not exclusive, judgmental or wrathful.  I could cherry pick from the religions that seemed interesting to me and "try them on for size," browsing like I might shop for a coat, trying a little mantra meditation here, a little vegeterianism there. And so I was lost in this hedonistic, easy-going postmodern spirituality for more than a decade.

My excuses for not bending the knee to the God of the Bible were many, and varied:


"I'm not as bad as (insert friend/neighbor/family member here)."

"Everybody I know does this, so it must be okay."

"The Bible has no authority over me, it was written by men, not God, and has been tinkered with over the centuries.  Sure, there's some good stuff in there, but it's not inerrant."

But thankfully, God rescued me from my own foolish, worldly wisdom.  He opened my eyes to the horrific nature of my own sin, and I saw in one instant the wretchedness of my own depravity in a way I'd never seen it before.  I knew beyond a shadow of a doubt that I needed a Savior.  Like Christian in Pilgrim's Progress, I knew that my own "sin burden" would sink me lower than the grave, and into the fires of hell, rightfully so, for all my wretched sins committed against a holy God.

The excuses that had once tumbled so glibly out of my mouth were revealed in an instant for the foolishness that they were. My mouth was silenced.


"Now we know that whatever the law says, it says to those who are under the law, so that every mouth may be silenced and the whole world held accountable to God." (Romans 3:19)

Today, my heart is especially broken over friends who are still lost and, like I was once, in open rebellion to the God of the Bible. I have reconnected recently with a friend from long ago, and have wondered how to approach her with the gospel.  This friend is very, very dear to me, and stood by me during a very dark time in my life more than 20 years ago.  But recently, on a Facebook comment thread, this friend took exception to an article that I posted about a new, radical movement inside of evangelical Christianity that encourges Christians to embrace homosexuality as a viable lifestyle for some Christians.  Until recently, I have not posted much on homosexuality due to it being such a charged topic, but after reading a recent article by Christian writer Skip Coryell, I've changed my stance on writing about this issue.  Coryell basically makes the case that Christians in general have been intimidated into remaining silent on this "hot potato" issue, rather than speaking biblical truth into a lost and dark world that so desperately needs it.  So that's the background for this recent conflict between me and an old friend: we are on opposite sides not only on this issue of homosexuality, but on the issue of whether or not the Bible has spoken authoritatively on this, and all other, issues.

My friend, by all indications, seems to still have the same easygoing Universalist belief as so many in the world today, and the same one I held to for so long.  And what's not to like about a view which demands nothing of a person, and seems to grant permission to believe whatever one likes, and live however one wants?  Universalism seems like the religion of love, with its olly olly oxen free clarion call of "come one, come all."  I can attest that one of the reasons that I myself embraced Universalism as a young adult was that during this period of my life, I was working in an industry that attracted many homosexuals, some of whom I became friends with.  The biblical idea that these friends of mine would be damned for their sin was absolutely ludicrous to me.  Who could believe in such a God?  Moreover, who could love such a God?

I wish I could somehow reach into the hearts of all my lost friends - including the one I've recently gotten in touch with - and somehow explain to them that following Christ is not about getting a checklist of the "right" things to do and following it.  It is not someone grudgingly doing good things, the way a kid might hold his nose and drink down bad medicine.  It is being free from the curse and condemnation of sin, and then joyfully serving the Lord who bought us out of the slave market of sin.

We've broken God's moral laws, and we stand condemned.  We cannot forgive ourselves. We can't do enough good works to "get out of the hole" our sins have put us in.  There is no giant "scale" somewhere in the sky waiting to weigh out our good deeds against our bad deeds.  We are condemned, lost, doomed......unless God himself intervenes into this dire situation.  But miraculously, He did.  My pastor often comments that the 2 most precious words in the Bible are "But God..."

BUT GOD....so loved the world, that he gave his only begotten Son, that whosoever believeth in him should not perish, but have everlasting life. (John 3:16)

BUT GOD....made a way for wretched, depraved men and women to be reconciled to a holy God, and has freed those who will repent and place their faith in Christ's atoning death from the law of sin and death. (Romans 8:1-2) 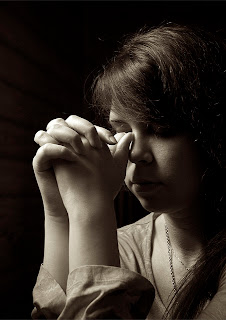 What amazing good news this is!  It is, in fact, the best news that the world has ever heard.  Will you commit to praying for those in your life who are lost, and need this good news?  Who don't recognize the bondage they're in?  After all, you might be the only Christian in someone's life who is willing to stand in the gap between them and the hell they are moving inexorably toward.  Perhaps you have given books, tracts, CDs, articles, etc. to the lost person in your life and you've been soundly rebuffed.  But what about prayer?  Have you earnestly appealed in prayer to God's mercy and lovingkindness on behalf of this person, knowing that any prayers they might make will go unheard?  I sometimes jokingly refer to prayer as the "throw up your hands" option.  You see, sometimes Christians will get frustrated after attempting to persuade the lost into salvation by appealing to their common sense and logic.  "Well," they might then say, exasperated, "I suppose there's always prayer!" As if prayer were somehow inferior to all the other attempts to persuade. But we must remember that salvation is a supernatural work of God, and there is a holy, supernatural mystery attached to the prayers of the righteous.  After all, Christians are the only ones who are allowed to approach the throne of grace where we know that we will be heard:


"Therefore let us draw near with confidence to the throne of grace, so that we may receive mercy and find grace to help in time of need." (Hebrews 4:16)

Surely someone interceded on your behalf before the Lord of Glory when you were a sin-loving, God-hating rebellious sinner.  Won't you put aside some time today to stand in the gap for those you know who are lost?


"The effectual fervent prayer of a righteous man availeth much." (James 5:16)