Reprinted from The Crosstalk Blog

Read the following carefully.  After you have finished, try to guess where the author of these statements recently spoke:


"Now I see that God prefers to work through intermediaries–Mary and the saints . . . He wants us to pray through Mary and not only directly." (p. 154, Ecumenical Jihad)

"[Mary] may bring the churches together again and heal the tears in her Son's visible body on earth, she, the very one who seems to divide Catholics from Protestants. The most distinctive Catholic doctrines, especially those concerning the Eucharist and Mary, may prove to be the most unifying and attracting ones." (p. 158, Ecumenical Jihad)

"Consecrate your life to the Immaculate Heart of Mary. She is the one who will win this war. She is the one (as the Bible says) who triumphs over Satan." (p. 169 – parenthesis in original, Ecumenical Jihad)

The author of these words recently spoke at:

A) World Youth Day for the Roman Catholic Church

B) Swimming the Tiber, a conference for Catholic converts sponsored by EWTN

The answer is C. Lighthouse Trails has the full story about the "Christian Apologetics" December conference--a report that demonstrates the growing disregard for the basic doctrinal teachings of Scripture. These are the doctrines that are essential to a proper understanding of the Gospel. They were the cause for the Reformation.

As a handful of Christians have been warning for some time, contemplative spirituality is drawing evangelicals to Rome. As could be expected, Rick Warren is leading the charge to overthrow the Reformation and to develop a global ecumenical spirituality that leads invariably back to Rome.

The author of the above statements is Peter Kreeft, a former Protestant who converted to Catholicism, and is now a Catholic apologist.  Kreeft is the author of the book Ecumenical Jihad, from which these quotes were taken.

The question is: Why would "America's Pastor" (Rick Warren) welcome an apologist for an apostate religious system into his church, and especially at a conference that is meant to give a defense of the Christian faith? 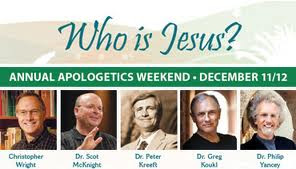 The Need for Elders Who Guard Their Flock
Posted by Christine Pack at 6:40 PM