“Blessed are you when men cast insults at you and persecute you.”


“The crowd rose up together against them, and the chief magistrates tore their robes off them and proceeded to order them to be beaten with rods. When they had struck them with many blows, they threw them into prison, commanding the jailer to guard them securely; and he, having received such a command, threw them into the inner prison and fastened their feet in the stocks. But about midnight Paul and Silas were praying and singing hymns of praise to God, and the prisoners were listening to them.” (Acts 16:22-25)

As you may recall, Luke is giving an account of Paul’s second missionary journey and recent entrance into Philippi of Macedonia.  Paul and Silas have just seen the conversion of Lydia, and shortly thereafter are met by a demon-possessed slave girl who has chosen to follow them in an effort to discredit their ministry…namely, by incessantly barking a feigned expression of the gospel. Paul, in exasperation, finally orders the demon to evacuate the young girl, much to the disappointment of the girl’s masters who were profiting from her demon-possessed antics.  Being none too happy about Paul’s vindication of their human side-show, they apprehended Paul and Silas and literally drag them to the marketplace to stand before the chief magistrates where they begin issuing accusations against Paul and Silas, even suggesting that they have somehow brought the entire city to a point of chaos (v20) in their proclamation of the gospel.  By this time a frenzied mob begins to form with an insatiable appetite for injustice, it would seem.

With this context in mind, we pick up Luke’s account now in verse 22: “And the crowd rose up together against them, and the chief magistrates tore their robes off them, and proceeded to order them to be beaten with rods.  And when they had inflicted many blows upon them, they threw them into prison, commanding the jailer to guard them securely; and he, having received such a command, threw them into the inner prison and fastened their feet in the stocks.”

Well, to the untrained eye it would seem that these wicked masters have had their way. They’ve incited the entire town to rise up against our two missionaries...and by now, Paul and Silas must have been saying between themselves, “How in the world has all of this come about?” I mean, they’ve only been in town a few days (v12). Now, all of a sudden, they find themselves naked (disrobed), encircled by a frenzied, boiling mob in the center of town…and the magistrates (supreme officials; towns usually had 2 of them) have just “order[ed] them to be beaten with rods.” And what is the indictment brought against them? Well, verse 21 says they were accused of “proclaiming unacceptable customs.”  Interestingly, the indictment is not that they’ve vindicated the slave-girl, but rather, that they are proclaiming the gospel of Jesus Christ…and for their testimony of Jesus Christ they have come under this severe persecution and punishment.

Now this should not surprise us, should it?  Paul said to his protégé Timothy in Phil 1:29, “To you it has been granted for Christ’s sake not only to believe in Him, but also to suffer for His sake.”  That seems pretty clear to me.  In other words, union with in Christ will be accompanied by suffering for Christ in the world…and both have been granted to the Christian for the sake of Christ.  The Lord Jesus Himself spoke of our imminent persecution in Matthew 5: “Blessed are you when [not if] men cast insults at you and persecute you.” (Matthew 5:11).  Now listen, the persecution of a Christian by the world is the world’s response to the Christian’s message of Jesus Christ; of repentance, and faith, and purity.  Paul states it as clear as it can be stated: “All who live godly in Christ Jesus shall suffer persecution.” (2 Timothy 3:12). It is the inescapable lot for the genuine Christian.

As one theologian said, “A wolf is not going to devour a plastic sheep.” How true!  In other words, the world may dislike, but it will not persecute a counterfeit Christian.  The world may scorn but it will not martyr a hypocrite.  Make no mistake, beloved, persecution is a testimony to the genuineness and reality of the Christian faith.  And I’ll say further, if you profess Christ and have never come into the experience of some level of persecution, you can at least doubt the genuineness of your outward testimony and you may have reason to doubt your profession. It is folly to suggest that God’s people and can be distributed throughout a godless world system and not experience the hostilities of that system against the testimony and message they bring. You must expect to find some form of scorn from the world.

Well, Paul and Silas don’t need anyone to tell them that.  They come into intimate proximity with scorn and persecution under these magistrates who have just ordered their flailing and beating. And for that special task of punishment they deploy some very hardened men known in these ancient communities as the “Lictors.” Allow me to introduce you to them.

Lictors were Roman civil servants assigned with the task of serving as bodyguards for the local magistrates (officials).  And to aid his work, a Lictor carried a “peacemaker” of sorts; a bundle of individual birch rods approximately 4 feet in length which he bound together by a red leather ribbon to form one tight column of solid rod.  In the center was a small ax that was carried in order to carry out impromptu executions.  So picture something like a meter-foot long nightstick weighing 4-5 pounds with a small ax head protruding outward. Now, these Lictors would lean these rods up against the shoulders much the same way a rifle might be carried today, and 10 to 12 of them would form a collective rank in front of the magistrate to which the were assigned.  Wherever the magistrate went, the rank of Lictors went, escorting him like special police entrusted to ensure the magistrate’s safety, and also to keep the local peace within the community. On occasions when civic conflict arose, these Lictors would become instruments of punishment by the magistrate’s command, and were often ordered to arrest and punish (or punish, then arrest, as we’ll see shortly) citizens that were appeared to be creating unrest.

Well with that context in mind, we see more clearly what is taking place on the occasion that Luke records here for us.  The local magistrates, with this growing mob looking on, has ordered their 10-12 Lictors to beat Paul and Silas with these meter-long, 5 lbs rods (ax heads removed).  Further, verse 23 states that our missionaries were struck, not a few times, but rather, “…they had inflicted many blows upon them.”  The word “many” literally suggests the idea that someone had lost count.  It speaks of a great number.  Further the world “blows” speaks to what is called a “stripe” or a heavily inflicted wound.  So Paul and Silas were beaten times without number in a way that inflicted very deep/heavy wounds…as one might expect when being flogged by a 4-5 pound, 4-foot long column of tightly wound birch rods. 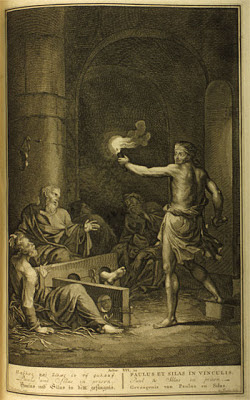 Verses 23 and 24 go on to state that, following their beating, the magistrates had Paul and Silas “...thrown into prison, commanding the jailer to guard them securely; and he having received such a command, threw them into the inner prison, and fastened their feet in the stocks.”  That word “thrown” is also interesting.  It means “to let go of a thing without caring where it falls.”  So that’s Paul and Silas’ introduction to their new quarters – they’re just thrown in wherever they may land – didn’t matter; just tossed in the hole – that’s the picture here.  I can assure you that in those days, prisoners there had far more reason to talk about prisoners’ rights than prisoners do today.  The inner prison noted here is nothing more than a large, dark hole carved out of rock.  The sanitary conditions, rodents and insects alone would have made this imprisonment unbearable. And keep in mind, Paul and Silas have probably had their backs beaten to a very threatening point, medically speaking, and are now placed in this dark, filthy hole, the floor of which is no doubt covered by a thick layer of human excrement. Further, their feet have been placed into stocks, which I learned were wooden holes situated in a way that stretched the legs so that they would cramp constantly.   Miserable, miserable conditions for a healthy man…let alone two severely beaten men.

But verse 25 reveals the testimony of 2 men who, by God’s grace, saw every circumstance through the grid of God’s providential purpose.  That is, they considered themselves prisoners of the Lord, not of these magistrates…and in that mind-set, verse 25 records: “But about midnight, Paul and Silas were praying and singing hymns of praise to God, and the prisoners were listening to them.” I don’t have the white space to go into this verse in detail.  We’ll have to dedicate doing so to next week’s article. The short of it is this: These two men endured their circumstances by turning to our all-sufficient Lord in prayer, and by reminding themselves of His intimate love for them by way of singing hymns that saturated their minds with reminders of the care and concern of God for His people.  And soon, God would transform the circumstances of these men to place them as conduits through which to bring about the conversion of their contemporary hardened Roman jailer….and one of God’s elect. How instructive for us, beloved.

On Serving One Another In Love

Discontentment Is A Sin
Posted by Christine Pack at 6:22 PM