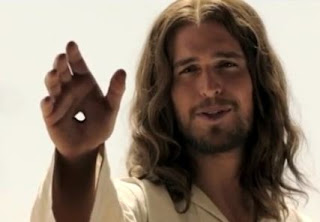 I love the hashtag #CheckYourJesus, which Pastor Dan Phillips of the Pyromaniacs blog came up with.   For right or wrong, it conjures up an image of multitudes of people flipping over their "Jesus" to double check the label on the back. But is it really that important to get "Jesus" right? Does it matter who we think Jesus is, or is it simply enough that we are very sincere about what we believe? That fact is that we all need to be checking our "Jesus," because the consequences of not getting this right are eternal. And lest we forget, many people (including Catholics, Mormons, Jehovah's Witnesses, and some New Agers) claim to love and have faith in Jesus, including the producers of the Bible miniseries. Do they have the right "Jesus?" Do you?  Listen to Chris Rosebrough of Fighting For the Faith as he discusses the portrayal of "Jesus" in the currently running Bible miniseries. And then #CheckYourJesus.

The Mishandling of God's Word in the Bible Miniseries (Apprising)

Roma Downey on Being Catholic

Touched By An Angel, But Which Kind?

The Bible Miniseries Board of Advisors

The Bible or The Bible Miniseries? (Contender Radio)

Is Sincerity the Most Important Measure of Faith?
Posted by Christine Pack at 10:19 AM