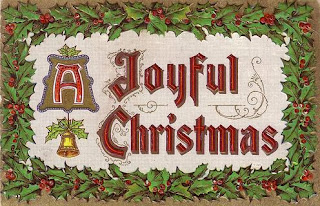 I love celebrating Christmas. As a former New Ager, I have written before about my guilty secret of celebrating Christmas every year as a non-believer, even during the decade in which I was immersed in New Age and eastern beliefs. To the dismay of my New Age friends (palm readers, tarot card readers, psychics, reiki practitioners, etc.), every year at Christmas time, I put up a tree, decorated my house, sang Christmas carols, and endured the teasing of my more "enlightened" New Age friends who had cast off the traditional beliefs associated with their (mostly) Judeo-Christian upbringings. And along with them, I never could quite understand why I chose to participate in celebrating Christmas. It certainly was not because I self identified in any way as a Christian (I did not). For those years of my life, my worldview was a mixed bag of New Age/New Thought mixed with eastern teachings, including reincarnation. But the idea of Christmas always seemed so hopeful to me at heart, the idea that a sovereign creator God could or would actually choose to dwell with mankind as one of us, even if I believed it wasn't true. Imagine my delight, then, as a born again Christian when I came to realize that it was true after all: God did become flesh, and He did dwell among us. And He did it out of his great and wondrous love for us, as part of his plan of redemption. Amazing! Obviously, Christmas took on a whole new flavor for me after that.

I still have a deep love for Christmas today, and the idea of celebrating our Savior, God in the flesh, coming to earth. Each year as a believer, it is with great joy that I embrace the Christmas season (earlier and earlier each season, my husband would hasten to point out). And while I recognize that for some, the Christmas season is one big frazzled rush, I really love the joy and the sparkle and the decorating and the busyness of the Christmas season. Our sons are still at home with us, and I like being able to take advantage of opportunities to point them toward the joy of knowing and remembering and dwelling on God's goodness in providing a Savior for us, in whatever ways I can. For instance, I take pleasure in cooking special foods that we have only at Christmas time, because I can use this as an object lesson to point my boys to God's goodness in giving us special, delicious dishes that we can look forward to and enjoy only during the Christmas season. A little taste of heaven to come, is how I frame it.

The songs we sing during the Christmas season are also a great opportunity we can use as a springboard for broaching the subject with our lost loved ones of how it is that man is reconciled to God (and why he needs to be reconciled to God in the first place). After all, so many of our Christmas carols are just loaded with doctrine that tell the story of Redemption in just a few verses.....and we all know those songs, even the lost. Christmas carols are played over and over and over all season long at Target, at the mall, at the grocery store, at Wal-Mart......they're everywhere. We go around humming and whistling these familiar tunes, many of us remembering them from our childhood. And yet, only Christians can actually explain what these songs mean.


Peace on earth and mercy mild,
God and sinners reconciled!
(from Hark! The Herald Angels Sing!)

Long lay the world in sin and error pining,
Til He appear'd and the soul felt its worth.
A thrill of hope the weary world rejoices,
For yonder breaks a new and glorious morn.
(from O Holy Night)

God rest ye merry, gentlemen, let nothing you dismay,
Remember Christ our Savior was born on Christmas Day,
To save us all from Satan’s power when we were gone astray.
O tidings of comfort and joy!
(from God Rest Ye Merry Gentlemen)

In those verses above, you can see the eternal problem of man laid out very simply in just a few words: man with a sin debt he cannot pay, and a holy God, to whom man is accountable, stepping into history with a plan of Redemption. How simple is it to turn to someone in the store next to you and say, Aren't these Christmas carols so beautiful! Do you know the meaning of the one you are humming? I can tell you about it...

Having said all this, I have noticed in recent weeks what seems to now be an annual occurrence of Christians-shouldn't-celebrate-Christmas-because-it's-a-pagan-holiday commentary online. So to address that topic head on, I would like to first say that I would never urge a brother or sister to go against their conscience if they felt that celebrating Christmas was wrong or sinful. I don't disdain my brothers or sisters who don't have a comfort level with such celebrations, nor do I feel superior in my freedom. But what I would like to point out is that a lot of this concern over celebrating Christmas (and oftentimes Easter, too) comes from misinformation attributed to an historian named Alexander Hislop. We've posted before about the myths associated with Hislop which you can read about here, myths that were formed from his own biases, and which were not actually rooted in historical data. And I would therefore urge, with all gentleness and kindness, for my fellow Christians to think this issue through biblically, historically and truthfully. After all, God is the author of all truth, isn't He? So truth matters.


"And in the same region there were shepherds out in the field, keeping watch over their flock by night. And an angel of the Lord appeared to them, and the glory of the Lord shone around them, and they were filled with great fear. And the angel said to them, 'Fear not, for behold, I bring you good news of great joy that will be for all the people. For unto you is born this day in the city of David a Savior, who is Christ the Lord. And this will be a sign for you: you will find a baby wrapped in swaddling cloths and lying in a manger.' And suddenly there was with the angel a multitude of the heavenly host praising God and saying, 'Glory to God in the highest, and on earth peace among those with whom he is pleased!' When the angels went away from them into heaven, the shepherds said to one another, 'Let us go over to Bethlehem and see this thing that has happened, which the Lord has made known to us.' And they went with haste and found Mary and Joseph, and the baby lying in a manger. And when they saw it, they made known the saying that had been told them concerning this child. And all who heard it wondered at what the shepherds told them. But Mary treasured up all these things, pondering them in her heart. And the shepherds returned, glorifying and praising God for all they had heard and seen, as it had been told them." (Luke 2:8-20)

I would also like to ask for my Christian friends who are not comfortable with celebrating Christmas not to disdain those of us who do enjoy celebrating the birth of our Savior. After all, the gospel accounts of Luke and Matthew tell of Jesus' birth being proclaimed, angels singing his praises, shepherds rushing to see him, and wise men bringing him gifts some time later. So for Christmas, I feel freedom and great joy in:


...proclaiming his birth (often using Christmas as a springboard to talk about how God has sent a Savior who died for sinners);

...exchanging gifts with my loved ones as a way of remembering the greatest Gift of all time, our Savior, who was given to us by God out of his great loving-kindness.

So again: I would never urge Christians to go against their consciences and celebrate a holiday or festival they aren't comfortable with. But, for those who look forward to Christmas each year so that they can celebrate the birth of their Savior (even though no-one knows the actual date of Jesus' birth), yet who have heard that they are sinning against God if they love celebrating Christmas, please read the articles linked below, and feel freedom to reclaim your joy in Christmas.

"Therefore do not let anyone judge you by what you eat or drink, or with regard to a religious festival, a New Moon celebration or a Sabbath day." (Colossians 2:16)

The Best Gift I Can Give Christian Christmas Haters (Cripplegate)

Do Some Christian Traditions Have Pagan Origins? (Got Questions?)

Christmas Is Just a Christianized Pagan Holiday? Not So Fast..... (Sola Sisters)