reprinted in its entirety from Answers in Genesis' original post 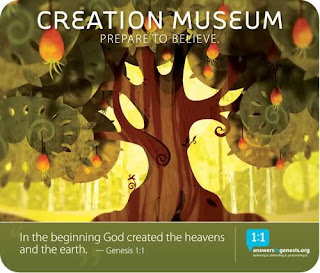 As Answers in Genesis (AiG) representatives have stated many times in response to media interviews and other inquiries, the Creation Museum welcomes all visitors—regardless of their beliefs. Because the museum unapologetically presents a biblical worldview that is largely excluded from public schools, secular museums, and the media, we truly hope that people will be open-minded enough to consider coming to a unique museum and learn about an alternative perspective that is largely discriminated against in society.1 At the same time, any person who comes with the intent to bait or test museum staff, such as the male couple who declared their pre-meditated intent to attend a museum-sponsored Date Night dinner in order to act “flamboyantly gay” (the words posted by one of them on a blog last month) and provoke an incident that would disrupt the other guests, is entirely another matter.
Many weeks before the February 11 “Date Night at the Creation Museum,” ministry leadership became aware that Mr. Joe Sonka, a fervent museum opponent, was planning to crash a museum dinner where couples would hear a special talk by Ken Ham on marriage principles from the book of Genesis. In a January posting on his website, Mr. Sonka announced his strategy to send a same-sex couple to the event, stating: “Let’s get to work doing a fundraiser so we can send the most flamboyantly gay couple imaginable to this dinner” (http://barefootandprogressive.blogspot.com/2011/01/date-night-at-creation-museum.html).
[Editor’s Note: We caution our readers that the above link contains vulgar language. Read at your own discretion.]

“Fantastic presentation on marriage. A blessed evening.”
“Enjoyed Christian fellowship and meeting new friends.”
“I thoroughly enjoyed tonight. I enjoyed being in a Christian environment, and everything ‘was just right.’”
– Comments from guests at Friday date night
Mr. Sonka was aware that Answers in Genesis/Creation Museum accepts the Bible’s teaching in Genesis regarding God’s plan for the institution of marriage, as one man, one woman—for life. (According to his blog, he has visited the museum at least twice before.) Like many other Bible-upholding ministries, we do not hide the fact that we oppose redefinition of marriage or the altering of the biblical stance on relationships between men and women. Knowing the ministry/museum position on these issues, Mr. Sonka deliberately wanted to manufacture a scene at our special event by being “flamboyantly” disruptive. His obvious purpose was to gain attention and generate news coverage, not to enjoy the evening’s pro-marriage message based in Genesis. In the process of stirring up trouble, he hoped to create a news spectacle and provide fodder for his blog. Curiously, though Mr. Sonka was the instigator of the party-crashing scheme, he was reluctant to pay for the two tickets himself, extending his stunt by creating a public auction to pay for the tickets and cover his expenses to get to the museum (http://www.kickstarter.com/projects/2111059812/whore-v-virgin-date-night-at-the-creation-museum).
After the museum had closed to the general public on the evening of February 11, two males and one female arrived inside the museum’s portico to check in for the after-hours dinner and talk. They were met by two museum safety officers, who noticed the party consisted of three individuals, not four, and the officers asked them if another person was going to be joining them for the dinner. To their affirmative response, one of the officers inquired about the type of vehicle “she” would be driving and asked for “her” name so the museum staff could alert the front gate, which is closed after museum hours, to allow her entry. One of the two men, who identified himself as Brandon, volunteered that it was a “he” who was coming to dinner. Brandon was asked whether the individual who was running late was, in fact, his partner for the evening, to which he replied, “Yes.” He further confirmed his name was Joe (Sonka), which is what we had suspected for weeks since learning of his set-up plans. The safety officer explained to him that according to Date Night advertisements and ministry website announcements,2 this event was being held in a Christian environment (e.g., where guests would hear a message about “the biblical view of marriage.”), further stating that it appeared that Brandon and Joe Sonka were coming with disruptive intentions to make some kind of a statement.
The officers politely informed Brandon that he would not be allowed to attend the dinner and that he would have to leave the premises. The following words were verbally shared with him from a script (again, we anticipated the party-crashers) that included the following phrase: “It seems that you may have come tonight with either wrong intentions or to make a statement of sorts.”
Brandon waited in the portico as his companions, the male/female couple, entered the event. About one-half hour later, Mr. Sonka drove up to the front entrance—but never left his car—as Brandon exited the portico and entered Mr. Sonka’s vehicle before they drove off the property together.
As a part of their manufactured deception, we should point out that at least one of the two men has since acknowledged that he is not even a homosexual. So this was not a “gay” couple at all but a part of their act. It reveals yet one more thing about their deceit.

Posted by Christine Pack at 9:47 AM