On Arresting the Temper

I shared a conversation recently with a fellow saint regarding a very instructive verse in Psalm 36:  Verses 1-2 of that chapter state “Transgression speaks to the ungodly within his heart…it flatters him in his own eyes, concerning the discovery of his iniquity and the hatred of it.”  This text reveals to us the diabolical means by which the principal of evil residing in a man seeks to perpetuate vice, and enslave a man in his sin.  You see it is the very nature of the sin nature to invoke self-flattery and excuse, as a means of concealing your iniquity, and therefore suppress any potential for self-abhorrence and repentance.  That means to say that our propensity is to justify vice, rather than to acknowledge it and confess it for what it is….and subsequently repent of it.

Now there are many vices that we deceitfully attempt to excuse as legitimate.  But the one vice in particular that seems to consistently invoke self-flattery and excuse is the destructive vice of anger.  What danger lurks in the heart of the un-resisted temper!  We should never think that arresting this wicked vice is of little importance, beloved.  An inflamed, wrathful, angry, resentful professor of Christ does nothing to promote the gospel…and, in fact, teaches a person to hate it more effectively than a liar or even a thief.  And yet the same Authority that condemns these vices also forbids the fleshly fruit of a harsh temper no less vehemently.  Therefore, it is as much the responsibility of the Christian to subdue an unruly temper as it is to mortify the most offensive immoral behavior.

To that end, the Word of God pointedly admonishes against the temper and repeatedly impresses the mild disposition of meekness and gentleness. “Cease from anger and forsake wrath” (Ps 37); “Let all bitterness and wrath and anger and clamor and slander be put away from you, along with all malice” (Eph 4); “And so, as those who have been chosen of God, holy and beloved, put on a heart of compassion, kindness, humility, gentleness, and patience.” (Col 3); “Be kind to one another; tenderhearted” (Eph 4); “The fruit of the Spirit is peace, gentleness, meekness” (Gal 5).

There is no lack of clarity in Scripture concerning the importance of suppressing the temper, nor of nurturing meekness and gentleness.  So, if the authority of the Word of God has any value to you….here are His clear commands: Cease from one….and cherish the other!  If you intend to walk worthy of your calling during your brief sojourn on earth, it must be a walk characterized by lowliness and meekness.  God loves this quiet, mild disposition in the expression of the lives of His children.  So precious, in fact, are these qualities in the child of God that Scripture declares they are like an “adorning ornament” “....which is, in the sight of God, of great price” (1 Ptr. 3). 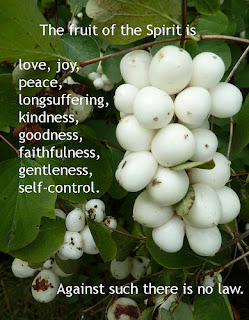 Listen, the very testimony of your faith (and the happiness of others) weighs greatly upon your daily, moment-by-moment exercise of arresting the flesh, and nurturing…in those critical moments…the gentle, quiet spirit that exudes total trust, peace, and confidence in God.  Such was the testimony of the very life of the Lord Jesus.  His was a pristine life of meekness throughout…even when unjustly condemned by men.  And will you, a wretch, attempt to flatter and excuse your anger in the midst of circumstances infinitely less severe?  When the Jews were about to stone Him, Christ remarks were simply, “Many good works I have shown you from My Father. For which of them do you stone me?” (Jn. 10)  During His mock, illegal trial before Caiaphas, after having been given “a blow” by one of the officers, Jesus calmly replied “If I have spoken wrongly, bear witness of the wrong; but if rightly, why do you strike Me?” (Jn. 18)

If you are to be a radiant testimony for the gospel….if you are to “adorn the faith”, then watch and pray with all devotion for meekness….in yourself and for those who are sojourners with you.  Do not flatter and excuse your anger…but rather, bow your head at the moment of temptation and ask the Spirit of grace to bring every soft word to bear in turning away wrath.  Yield to the resident Helper within, and never relax in your diligence to arrest the carnal dispositions of the flesh until your temper is brought into full obedience to Christ.  Discipline and prepare yourself to “Make the most of every opportunity” (Eph 5) to display the splendid virtues of Christ.  The days are evil, beloved…..what greater setting for children of light to abound in righteousness?