This recent YouTube video with Caryl Matrisciana on the dangers of yoga is both sobering and informative, and explains why Christians should not attempt to "blend" their worship of God with the pagan practices of Hinduism.  This is a very timely issue right now, given that a Hollywood movie starring Julia Roberts (Eat, Pray, Love) is about to be released and will be presenting a glowing cinematic portrayal of a sanitized, Americanized version of Hinduism.

Yoga is the salvific practice of Hinduism; in other words, it is the Hindu form of "salvation." But Hindus have no concept of sin against a holy God....instead, it teaches that man's greatest problem is his ignorance that he is "God" (or Brahman). Obviously, this is very different from the Christian understanding of what salvation is: Jesus's atoning death for the forgiveness of sins, and being made right with a holy God.

Just a few more reasons why yoga cannot be separated from its occultic origins are: 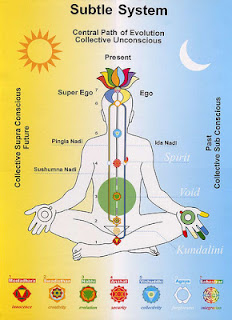 (1) The mantra meditation lowers mental barriers and opens one up to the demonic realm (though it often doesn't "feel" demonic at first...it feels "good" and "spiritual".....even holy);

(2) The yoga positions themselves are all prayer postures designed to honor one of the millions of hindu gods;

(3)  The "Namaste" is an unbiblical practice. "Namaste" is when the yoga practitioners bow to one another while each says "Namaste." "Namaste" means "I am bowing to the 'God' within you." This is obviously not a biblical concept because we cannot assume that everyone we would meet in life has God within them. For the Christian, there are only 2 kinds of people: those who are spiritually dead (the lost), and those who are born again believers in-dwelt by the Holy Spirit. For me to practice the "Namaste" would mean that I would be giving false hope and assurance to the lost that I am recognizing them as my spiritual brothers and sisters.

(4) The yoga positions themselves are not only for the purpose of honoring and worshiping Hindu gods, but they are done in a very specific order for the purpose of aligning and opening up the"chakra" system.  It is believed that this alignment will not only enable one to meditate more deeply, but will also awaken something called "kundalini," also known as "serpent power." In the yoga tradition, it is believed that a "serpent" lies coiled and sleeping at the base of the spine until it is "awakened" and begins to uncoil, slowly moving its way up the spine, and allowing the practitioner deeper meditation and union with "Brahman."

Brahman is supposed to be this infinite, transcendent reality from which all things came - including the millions of Hindu gods. The aim of yoga is to attain union with Brahman......basically, the ultimate purpose of yoga is to release people from the Wheel of Life, and their karmic debts, and to prepare its practitioners for death.

However, the response I often hear from Christians is this: "But as a Christian, I can 'do' yoga unto the Lord!" My question would be: How is that any different from the golden calf incident, recorded in Exodus 32:1-6, in which Aaron tried to claim that they were honoring the Lord with their syncretized religious worship?


"When the people saw that Moses was so long in coming down from the mountain, they gathered around Aaron and said, "Come, make us gods who will go before us. As for this fellow Moses who brought us up out of Egypt, we don't know what has happened to him." Aaron answered them, "Take off the gold earrings that your wives, your sons and your daughters are wearing, and bring them to me." So all the people took off their earrings and brought them to Aaron.  He took what they handed him and made it into an idol cast in the shape of a calf, fashioning it with a tool. Then they said, "These are your gods, O Israel, who brought you up out of Egypt." When Aaron saw this, he built an altar in front of the calf and announced, "Tomorrow there will be a festival to the LORD." So the next day the people rose early and sacrificed burnt offerings and presented fellowship offerings. Afterward they sat down to eat and drink and got up to indulge in revelry." (Exodus 32:1-6, my emphasis) 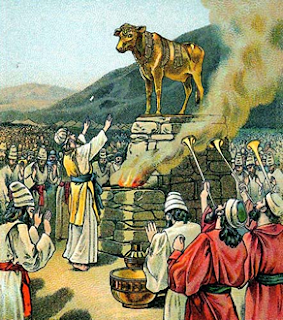 This story is one of the most powerful biblical warnings there is against incorporating pagan practices into our worship of God.   What most people don't realize is that this well-known incident wasn't about straight up paganism. No, this story records how God's chosen people blended together (1) what they had been taught to do by God with (2) pagan practices that were familiar to them from their years of captivity in Egypt. They knew about altars and making offerings to God. And they knew about pagan animal worship from their exposure to Egyptian culture. When Moses delayed returning to the people from atop the mountain where he was speaking with God, the people  decided to create their own tangible way of worshiping God. So they set up an altar, added a little Egyptian flavor in the form of cow worship, and called it a festival for the Lord. And God saw this, and was very pleased? Not exactly. This is what the Bible records:


"Then the LORD said to Moses, "Go down, because your people, whom you brought up out of Egypt, have become corrupt. They have been quick to turn away from what I commanded them and have made themselves an idol cast in the shape of a calf. They have bowed down to it and sacrificed to it and have said, 'These are your gods, O Israel, who brought you up out of Egypt.' "I have seen these people," the LORD said to Moses, "and they are a stiff-necked people. Now leave me alone so that my anger may burn against them and that I may destroy them. Then I will make you into a great nation." " (Exodus 32:7-10, my emphasis)

God was not pleased - and only Moses' intercession on their behalf saved them from being completely destroyed by God. As if that weren't a clear enough warning against mixing pagan worship practices with worship of God, we are also warned in Deuteronomy against spiritual syncretism:


"The LORD your God will cut off before you the nations you are about to invade and dispossess. But when you have driven them out and settled in their land, and after they have been destroyed before you, be careful not to be ensnared by inquiring about their gods, saying, 'How do these nations serve their gods? We will do the same.' You must not worship the LORD your God in their way..." (Deut, 12:29-31a, my emphasis)

God is quite clear on how we are to worship and approach him - and it is not through blending our worship of him with pagan practices.  I recognize that it is very hip and cool and popular in today's global, syncretized culture to meld different things together. We are most certainly an experience-driven culture, always seeking the fresh, exciting, "new" thing. And we also like our smorgasbord religions, with a little of this, a little of that. But we have clear mandates from Scripture about how we are to worship and approach God. We are to be set apart from the world - not syncretized with it - so that's God's truth will shine like a beacon in the darkness.

So, how did the story turn out?  How did the Lord view the golden calf incident? Was He "honored" by the claim of the Israelites and Aaron that they were, in fact, worshiping him with their incorporation of pagan religious practices?


"He took the calf they had made and burned it in the fire, and ground it to powder and scattered it on the water and made the Israelites drink it." (Exo 32:20)

Bottom line? Christians must not be tempted to "borrow" practices from false religions and fool themselves into thinking that they can honor the Lord in this way. And if they have done so, they should repent.....or they might just end up drinking ground calf juice.

Yoga For Children: Not Child's Play

Doctor Prescribes "Therapeutic" Yoga For A Christian Woman with Devastating Consequences
Posted by Christine Pack at 10:34 AM