Being 'Radical' and 'Missional' The New Legalism?

Are you embarrassed, as a Christian, because you and your family have not sold all to go and live in a war-torn, third world country where you can minister to orphans behind enemy lines while taking incoming fire? If so, you may have bought into a movement that has been coined by World Magazine as the "new legalism." From the World article:


"I continue to be amazed by the number of youth and young adults who are stressed and burnt out from the regular shaming and feelings of inadequacy if they happen to not be doing something unique and special. Today’s millennial generation is being fed the message that if they don’t do something extraordinary in this life they are wasting their gifts and potential. The sad result is that many young adults feel ashamed if they 'settle' into ordinary jobs, get married early and start families, live in small towns, or as 1 Thessalonians 4:11 says, 'aspire to live quietly, and to mind [their] affairs, and to work with [their] hands.' For too many millennials their greatest fear in this life is being an ordinary person with a non-glamorous job, living in the suburbs, and having nothing spectacular to boast about." (The 'new legalism' -World Magazine, May 4, 2013)

There are a few writers of today that I suspect might be contributing to this mindset of, I've got to Go Do Big Things For God. And the reality is that these subtle teachings about being great for God can pluck at our flesh, and cause us to be prideful and to subtly shift our thinking into a sort of hierarchical framework. By this I mean that we can perhaps unconsciously begin to think of some Christians as being "Good," some "Better," with some (especially the overseas missions one) garnering the coveted "Super Christian" label.


"As missionaries (for 9+ years) in an open and 'popular' African country, we saw the damage this ('radical' and 'missional') mindset has had on the gospel going forth in power and truth! Experience and 'suffering' have superseded what really matters--that of preaching repentance. While there may be more orphanages built, wells dug, and food programs established, the country remains biblically illiterate, and therefore remains in darkness. All because a bunch of twenty year olds were challenged to go shoeless and get dirty." (a commenter on the Sola Sisters Facebook ministry wall, my emphasis)

I am especially observing younger Christians being caught up in this "Super Christian" mindset, and really, is it so hard to see how that happens? In our 20s and for some of us, even into our 30s, we're at the top of our game, humanly speaking. Still in good health, still productive, still mentally sharp, we're firing on all cylinders. But fast forward five or ten or fifteen years, and reality begins to set in. There are unexpected illnesses, and death. Family difficulties. Job losses. We realize our flesh and strength and abilities can, and do, and will, fail us. We begin to really understand those passages in Scripture about clinging to the Lord in the trials. And those Super Christian dreams begin to fade.


"Whatever you do, work at it with all your heart, as working for the Lord, not for human masters, since you know that you will receive an inheritance from the Lord as a reward. It is the Lord Christ you are serving." (Colossians 3:23-24) 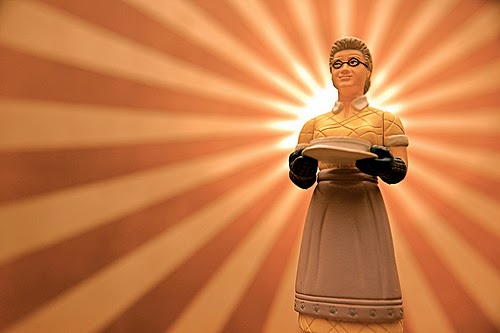 On this particular issue, Bob DeWaay's teaching on Pietism (linked below) really settled me down (and I'm not talking the good, Puritan kind of pietism.....I'm talking the self righteous kind, in which some Christians are regarded as "Super Christians" because of their lifestyle choices). Yes, there is a proper place for exhorting each other to know our gifting, and to exercise our gifts, etc. But let's be honest: we can also make ourselves nuts trying to figure out if we are fulfilling our God-given purpose. There is nothing at all wrong, or second tier, or second rate, or somehow "less than" about being an ordinary Christian, living one's life day in and day out, and fulfilling one's responsibilities, however small or menial they seem, as unto the Lord. Just think for a moment about what a peculiar time it is that we live in, in the midst of an intensely narcissistic, navel-gazing culture, in which we are bombarded with the idea of a Grand Purpose For Every Life. The lost mind can pick up on this idea of the Grand Purpose, and have starry eyed dreams of being a rock star or an American Idol or a great sports star. But the Christian might also unwittingly pick up on this idea and begin to think that they, too, must live out the Super Christian life. Contrast this thinking to how people lived a mere hundred and fifty years ago, in which time a person might be born, grow up, work, live and die in one small community, without having ever traveled past the county line, much less state lines or country borders. They might have an impact on a hundred people, or twenty people, or just their immediate families. But can it not all be done for the glory of God? Can a blue-collar Christian man who is quietly living his life, working hard at his job, being faithful to his wife and day in and day out teaching his children about God be just as honoring to the Lord as the high-powered Christian executive who is giving millions? What about the behind-the-scenes Christian wife and mother, who is going about the menial tasks of doing laundry, washing dishes, mopping floors, and teaching her children the Bible? Is she somehow a lesser Christian? What about the older Christian man or woman, who quietly seek to disciple those younger than them in faithfully learning the Scriptures, and serving the Lord and their families? Are these not needed and necessary ministries in the body of Christ? I submit that there is no shame in living a quiet, God-honoring life, and that Christians ought to take care not to allow themselves be confused by extra-biblical hierarchical concepts about the Christian life.

A Review of David Platt's 'Radical' (by Pastor Gary Gilley)

Being Missional The New Legalism?

Professor Anthony Bradley of King's College has written an excellent article entitled The New Legalism: Missional, Radical, Narcissistic, and Shamed. In this article, Bradley cites David Platt and the notion of "radical Christianity" for contributing to this new legalistic mindset, and states the following:

"Being a 'radical,' 'missional,' Christian is slowly becoming the 'new legalism.' We need more ordinary God and people lovers (Matt 22:36-40)........I continue to amazed by the number of youth and youth adults who are stressed and burnt out from the regularly shaming and feelings of inadequacy if they happen to not being doing something unique and special. Today’s Millennial generation is being fed the message that if they don’t do something extraordinary in this life they are wasting their gifts and potential. The sad result is that many young adults feel ashamed if they 'settle' into ordinary jobs, get married early and start families, live in small towns, or as 1 Thess 4:11 says, 'aspire to live quietly, and to mind [their] affairs, and to work with [their] hands.' For too many Millennials their greatest fear in this life is being an ordinary person with a non-glamorous job, living in the suburbs, and having nothing spectacular to boast about." (Anthony Bradley, Associate Professor of Theology and Ethics, King’s College, New York)

Or to paraphrase Christian researcher Bob DeWaay, "Why can't we just be ordinary Christians, living out our lives fulfilling ordinary responsibilities by keeping a job, paying bills, taking care of our families, etc.?" In other words, there is a growing perception in evangelicalism that those who don't do Great Big Things For Jesus are somehow deemed inferior. That unless you've sold everything to go take care of orphans behind enemy lines while taking incoming fire, you're sort of a "second-tier Christian."  So unconsciously, but pervasively, there is now a mindset in evangelicalism that there are these "ordinary Christians" who live in America and take care of their families and work at their jobs, and then there are the behind-enemy-lines-in-a-third-world-country "Super Christians." And this new pietistic mindset of missional legalism sure does seem to prey upon the immaturity and folly of youth, doesn't it?


"For I can testify about them that they are zealous for God, but their zeal is not based on knowledge." (Romans 10:2)

For the record, please understand that I am not against missions. And neither am I saying that it's bad or wrong for Christians to go to third world countries and feed orphans behind enemy lines. What I'm saying is that the "ordinary Christians" in America and the Christians who go to third world countries to proclaim Christ and care for the needy are both important for building up the body of Christ, and both are vitally necessary.

If Platt's Radical was Radical