A Facebook friend recently tagged me with the article What's Behind Reports of Ghost Sex?, an article in which it has been claimed by some people that they have had sexually intimate relations with, as the title of the article implies, ghosts. Yes, you read that right, and no, I'm not making this up. A few celebrities have even gotten into the mix, including actress Natasha Blasick and singer Kesha. In fact, Kesha revealed in an interview with Ryan Seacrest that her song Supernatural was about her own encounter with a supernatural being, an encounter she described as "sexy time with a ghost." 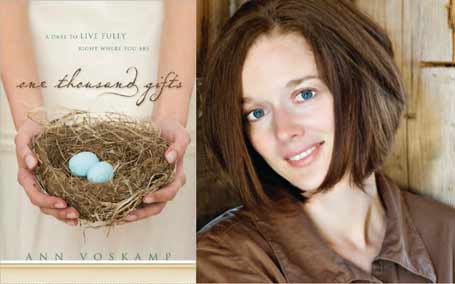 But wait, you might be saying right about now. That's the culture, and we're Christians, so what on earth does that have to do with us? It has to do with Christians for this reason: this kind of mystical sexual experience, while not uncommon in the New Age (which can be very sensual anyway because of the paganism element), is now in the Christian Reformed camp, with their very own mystical girl looking for sexytime with God. I'm referring to Ann Voskamp, a bestselling author who has written in explicit terms in her popular book One Thousand Gifts of having intimate relations with a supernatural being. Only, it's not a ghost Voskamp claimed to be sexually intimate with: it's God.


"Nor should there be obscenity, foolish talk or coarse joking, which are out of place, but rather thanksgiving." (Ephesians 5:4)

"Do not let any unwholesome talk come out of your mouths, but only what is helpful for building others up according to their needs, that it may benefit those who listen." (Ephesians 4:29)

Let me just back up for a moment, and state that the premise of Voskamp's book (being thankful for God's sovereign provision and care) is good. She also shares a very emotionally moving account early on in the book of losing a sibling at a young age, an incident that was apparently foundational to her desire to learn how to trust God and rest in his sovereignty. But Voskamp goes very far afield from this good start by lapsing into language that is reminiscent of panentheistic mystics she seems fond of (Phyllis Tickle, Teresa of Avila, Brennan Manning). And even though she expresses wide-eyed dismay over Tim Challies' recent article stating that she has been influenced by Roman Catholic Teresa of Avila, a mystic who also wrote in explicitly carnal terms to describe her mystical encounters with God, Voskamp's denial rings a little hollow, given that she quotes Teresa of Avila liberally in One Thousand Gifts.

A few excerpts from her book, in which Voskamp describes her alleged sexual encounter with God:

"I think how lives, whole generations, were laid down to built this edifice, to find a way in. But they thought the steps to God-consummation were but three: purgation, illumination, union." (One Thousand Gifts, p 208)

"I remember this feeling. The way my apron billowed in the running, the light, the air. The harvest moon. I remember. The yearning. To merge with Beauty Himself. But here.......Now? Really?.......I am not at all certain that I want consummation.......And who wouldn't cower at the invitation to communion with limitless Holiness Himself?" (One Thousand Gifts, p 211)

"I run my hand along the beams over my loft bed, wood hewn by a hand several hundred years ago. I can hear Him. He's calling for a response; He's calling for oneness. Communion" (One Thousand Gifts, p 211)

"This invitation to have communion with Love---is this the edge of the mystery Paul speaks of? "'A man leaves his father and mother and is joined to his wife, and the two are united into one.' This is a great mystery, but it is an illustration of the way Christ and the church are one" (Ephesians 5:31-32). The two, Christ and the church, becoming one flesh---the mystery of that romance. Breath falling on face, Spirit touching spirit, the long embrace, the entering in and being within---this is what God seeks? With each of us?" (One Thousand Gifts, pp 212-213)

"God makes love with grace upon grace, every moment a making of His love for us. And He invites the turning over of the hand, the opening and saying Yes with thanks. Then God lays down all of His fullness into all the emptiness. I am in Him. He is in me. I embrace God in the moment. I give Him thanks, and I bless God and we meet and couldn't I make love to God, making every moment love for Him? To know Him the way Adam knew Eve. Spirit skin to spirit skin." (One Thousand Gifts, pp 216-217)

And yet, despite describing an encounter with God in the most sensual and carnal of terms, Voskamp gets a pass because.....why exactly? Is it because she's been featured by the Reformed powerhouse Desiring God? Is it because of her artfully limpid exchanges with Tim Challies? Is it because of her Pinterest-perfect, camera-ready rustic farm life? I'm not sure what the answers are, but I know that some of the same Christian women who would (rightly) cringe at the Ghost Sex article are falling over themselves to read Voskamp's book and give it out to their friends, with nary a thought to the idea that eroticizing the relationship between a high and holy God and man wouldn't be right.

Christian researcher Marcia Montenegro has also challenged those who would take exception to any kind of critique of Voskamp, and who claim that her use of sensual language is on par with the language used in Song of Solomon: Writes Montenegro:

No matter what some men may have written (Voskamp has offered this to support her sexual language), evaluation of any book about God should be consistent with biblical principles, not based on man's standards, which are ever changing -- no matter who those men may be.

With these thoughts in mind, I'll close with a few passages about sensuality from God's word. The scriptures I've posted from 2 Peter have some very hard words to say about sensuality. This passage from 2 Peter is written in the context of addressing false teachers, and while I am not calling Voskamp a false teacher or heretic, the way she has eroticized the relationship between holy God and man is clearly outside the bounds of what is biblical and God-honoring. Yes, the relationship between God and his redeemed is precious and marvelous and mysterious and wonderful.....but it is not sexual, and must not be thought of in those terms. That is blasphemous in the extreme:

"And many will follow their sensuality, and because of them the way of truth will be blasphemed." (2 Peter 2:2)

"I fear that when I come again my God may humble me before you, and I may have to mourn over many of those who sinned earlier and have not repented of the impurity, sexual immorality, and sensuality that they have practiced." (2 Corinthians 12:21)

".....and especially those who are abandoned to sensuality--craving, as they do, for polluted things, and scorning control. Fool-hardy and self-willed, they do not tremble when speaking evil of glorious beings....." (2 Peter 2:10)

"For speaking out arrogant words of vanity they entice by fleshly desires, by sensuality,
those who barely escape from the ones who live in error....." (2 Peter 2:18)

Panentheism: What Is It? (Apprising)

Panentheism Is Not A Gift (Amy Spreeman)
Posted by Christine Pack at 1:22 PM