Thank you to my friend Andy Olson of Echo Zoe Radio for having me on his show again recently.  We did this program as something of a follow-up to our first talk, which was about my background as a New Ager, and how, as a born again believer in Christ, I had slowly come to realize that many of the same New Age practices and beliefs that I had once held to as a Universalist New Ager were now flowing into the church, of all places.

As providence would have it, shortly after this first interview, Rob Bell, who is a very popular author, pastor and leader in the rapidly growing Emergent Church Movement, released a controversial new book entitled "Love Wins." In one interview about this book, Bell made the claim that his book was the beginning of a new reformation "of thought" that is coming into today's church. But the "Reformation" that Rob Bell wants to bring into the church is away from biblical truth, and toward an easygoing all inclusiveness, with nothing of the biblical concepts of the narrow path (Matthew 7:13) and the exclusivity of Christ (John 14:6). In fact, my view is that Rob Bell, either knowingly or unknowingly, is working as a kind of "change agent" from within the church to bring his beliefs about Universal Salvation (which is the core theology of the New Age Movement) into the church. 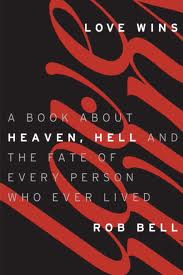 My interview with Andy was very in-depth, and we covered a lot of ground in just an hour, including the following:

➤ The rise of Universalism in the 19th Century, influenced heavily by the German philosophers of the day.

➤ The Five Fundamentals, developed as a response to early 20th Century Liberalism:

➤ The rise of the “Seeker Sensitive” movement as a reaction to the perceived problems with “fundamentalism” and Conservative Christianity.

➤ The influence of Rob Bell on today’s Church, especially among youth.

➤ The promotional video released by Rob Bell for his new book, and how it provocatively hinted at his belief in Universal Salvation for all......even though he and his supporters loudly protested to the contrary.

➤ The influence of mysticism, the monastic “Desert Fathers” and “Contemplative Prayer” on Rob Bell.

➤ Rob Bell’s response to his critics. We played the audio of Rob Bell giving an orthodox sounding pseudo-creed that uses Christian terms, but which carries redefined meaning.

We concluded our discussion of Rob Bell by emphasizing the importance of good teaching, and listed several good ministries that we can recommend.

The Echo Zoe interview can be listened to in its entirety here.

What Is "Christian Universalism" (Besides an Oxymoron)?
What Is the "Wider Mercy" Doctrine?
Heads Up, Christian Parents: Rob Bell Is Teaching Your Kids Universalism
Rob Bell Answers His Critics....But Don't Be Fooled


Who Exactly Has Got Some 'Splainin' To Do?
What Is The Emerging Church Movement and Why Is It Dangerous?
What Is Fundamentalism?
Rob Bell In His Own Words On The Inerrancy of Scripture
"Love Wins" the Smoking Gun That Proves Rob Bell is a "Christian Universalist"
Is Rob Bell A Universalist?  Yes and No.
Rob Bell: Don't Call It Universalism
Meeting at Mars Hill Bible Church Over Rob Bell's New Book
Jesus Gave Us Almost All We Know About The Doctrine of Hell
Rob Bell Praises New Age Author Huston Smith
Quantum Science Proves 'Everything Is Spiritual?' Not So Fast, Says Quantum Physicist Dr. Frank Stootman
Posted by Christine Pack at 11:51 AM