Shirley MacLaine: "I have some credibility about what I think now." 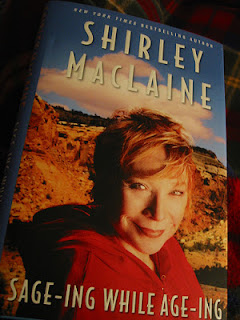 We wrote in a previous article that the New Age Movement never really went away, as most people believe, and this is true. The fact is, it didn't go away; rather, it was absorbed and mainstreamed into the culture. Many of its ideas and beliefs have become absorbed into everyday thinking, including how we think about:

Health (holistic remedies, many based on Chinese religious beliefs)

Academy award winning actress Shirley MacLaine was one of the first prominent figures to promote the New Age movement and its beliefs in a positive way, which she did in her 1983 bestselling book, "Out On A Limb." Even though this book - and MacLaine - both became punchlines and late night talk show fodder for many years to come, it looks like MacLaine (and the power behind her) is having the last laugh:

In a recent USA Today interview with MacLaine, the interviewer writes:


"When asked what people think when they hear her name, the actress quickly raises her index finger and twirls it in the air, making a high-pitched whistle as she does.

'But I don't think so much anymore. I think I have some credibility about what I think now,' she says, adding that she was a few decades ahead of the curve. 'Remember what people used to say about meditation? Now everyone is doing it.'"

And she's right.  Look around at our culture today. Do people today have to make a special trip to New Age bookstores to find their books on meditation? Or to purchase their tarot cards, runes, or crystals?  No, they only have to drive as far as Barnes & Noble, or click on Amazon, to get all of these things. Do people still joke about wacko, tree-hugging environmentalists? Well, they might, but the car they're driving to Barnes & Noble in is a hybrid, and has a yoga mat rolled up in the back. The New Age is no longer a punchline.  It's our everyday reality.

Universalism: The Gospel Message of the Emergent Church Movement and New Age Spirituality

Ayurveda "Old Fashioned" Therapy? Well, Sure, If You're A Hindu.

The Light That Was Dark

The Beautiful Side of Evil
Posted by Christine Pack at 5:19 PM