Qualifications of Elders
"For this reason I left you in Crete, that you would set in order what remains and appoint elders in every city as I directed you, namely, if any man is above reproach, the husband of one wife, having children who believe, not accused of dissipation or rebellion. For the overseer must be above reproach as God’s steward, not self-willed, not quick-tempered, not addicted to wine, not pugnacious, not fond of sordid gain, but hospitable, loving what is good, sensible, just, devout, self-controlled, holding fast the faithful word which is in accordance with the teaching, so that he will be able both to exhort in sound doctrine and to refute those who contradict." (Titus 1:5-9, my emphasis)

Dr. John Piper, respected author and pastor of Bethlehem Baptist Church, in alignment with his published views on female pastors, and as befitting his role as undershepherd over his church and fulfilling his 1 Peter 5:1-4 and Titus 1:5-9 responsibilities, recently warned his church body about a new emergent author named Lauren Winner who teaches classes with Emergent Church Movement leaders Tony Jones and Phyllis Tickle. (Although Jones and Tickle are considered mainstream evangelicals in today's church, Jones and Tickle are both way outside of orthodoxy as far as what they believe, teach and confess. Documentation to that effect is linked at the bottom of this post.) Dr. Piper also gave a sternly worded rebuke to Lauren Winner herself, who, in rebellion to God's clear command for women not to have authority over men, is an ordained "Reverend" at St. Luke's Episcopal Church in Durham, NC.

Oh, wait a second. That's not what happened. No, instead, Dr. Piper recommended a book by author (and "Reverend"?) Lauren Winner. Here is the recommendation: 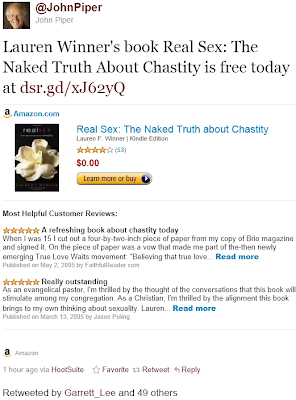 That question must be asked: What is a Christian in today's world to make of such things?

Tony Jones and Why He's Divisive

Who Is Phyllis Tickle?

Phyllis Tickle: Emerging Church Has a Dominating Influence Over Protestantism